I woke up Monday morning eager to avoid the magnitude of the day. I packed up and cleaned up, and after running out of chores to preoccupy my mind, I called an Uber to the airport.

I arrived at Dulles around noon, six hours before my scheduled departure to Lviv.  I did some last minute shopping, but mostly paced the halls in frantic anticipation.

My flight to Munich was delayed an hour, of course, and I missed my connection to Lviv. Thankfully, I’m trying this new thing where I don’t get upset by things that are out of my control.

After an eight hour flight of partially watched movies, I arrived at the disturbingly clean airport in Munich.

I marched promptly to the Lufthansa desk, where they had already arranged a new flight to Lviv- via Kiev… 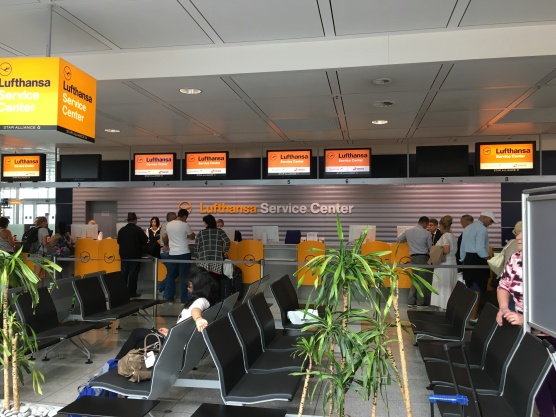 I’d planned to pick up a rental in Lviv at 1:00, drive straight to my first ’shtetl stop’ , and meet a tour guide there. That was now out of the question. I instead arranged to stay the night in Lviv, pick up my rental Wednesday morning, and meet my guide later that morning.

I arrived at the Kiev airport at 3:30pm. It was dark and dilapidated. I was low-key terrified. I sat like a brick in domestic departures for two hours, trying to avoid attention. I listened to the familiar voices on NPR to calm myself. I was told in Munich that my bags would transfer to Lviv, but I became quickly concerned that I should’ve done it myself.

I sat next to a very friendly (and very beautiful) college student from New Jersey, Christina, on her way to visit family in a village near Ternopil. She provided me with a wealth of practical advice and briefly soothed my anxiety.

I was so excited to see my luggage.

I took a taxi to the “Three Crowns Hotel”. The driver was so thankful for my 2USD tip. From what I understand, the average wage here is ~100USD a month, or 2000UAH.

The room was nice. I organized my things and went promptly to sleep.