Finally got my act together.

Woke up early, showered, bussed to city center, had a quick croissant sandwich.

Started at Vilnius Cathedral, which lies at the west end of Cathedral Square, perpendicular to Gediminas Avenue. Cathedral square is the center of Vilnius. In it stands a statue of the legendary Grand Duke Gediminas who holds a sword in his left hand, as he apparently favored diplomacy over war. It was built in 1996 by Lithuanian-American sculptor Vytautas Kasuba.

Archeologists have revealed that there has been a human presence in Vilnius since at least the time of Jesus, but for all intensive purposes Vilnius was founded in the 14th century by Grand Duke Gediminas, who moved the capital from Trakai. Gediminas and his descendants would rule over Lithuania (and later Poland) until the mid 17th century.

On the site occupied by the Vilnius Cathedral originally stood a pagan temple, eventually replaced by a church following the ostensible conversion of King Mindaugas, first ruler of Lithuania (mid 13th century). The nation reverted to heathen ways, but a new church was built following the reintroduction of Christianity in 1387. After it burned down in 1419, Grand Duke Vytautas built a new Gothic Cathedral, on the ruins of which stands the Cathedral today. It underwent constant renovations over the following centuries, culminating in the complete renovation by Laurynas Gucevicius in the final quarter of the 18th century. It is a neoclassical structure in an otherwise baroque city.

The Cathedral was the sight of coronations of all Lithuanian Grand Dukes for the following centuries. It is replete with art by founding director of the Vilnius School of Art, Franciszek Smuglewicz.

Perhaps most striking of all is the high altar, shaped like the front of a classical temple.

Of particular note and beauty is the Chapel of Saint Casimir, patron saint of Lithuania and son of Grand Duke and King of Poland Casimir IV. The Cathedral is lined with chapels belonging to various noble families. 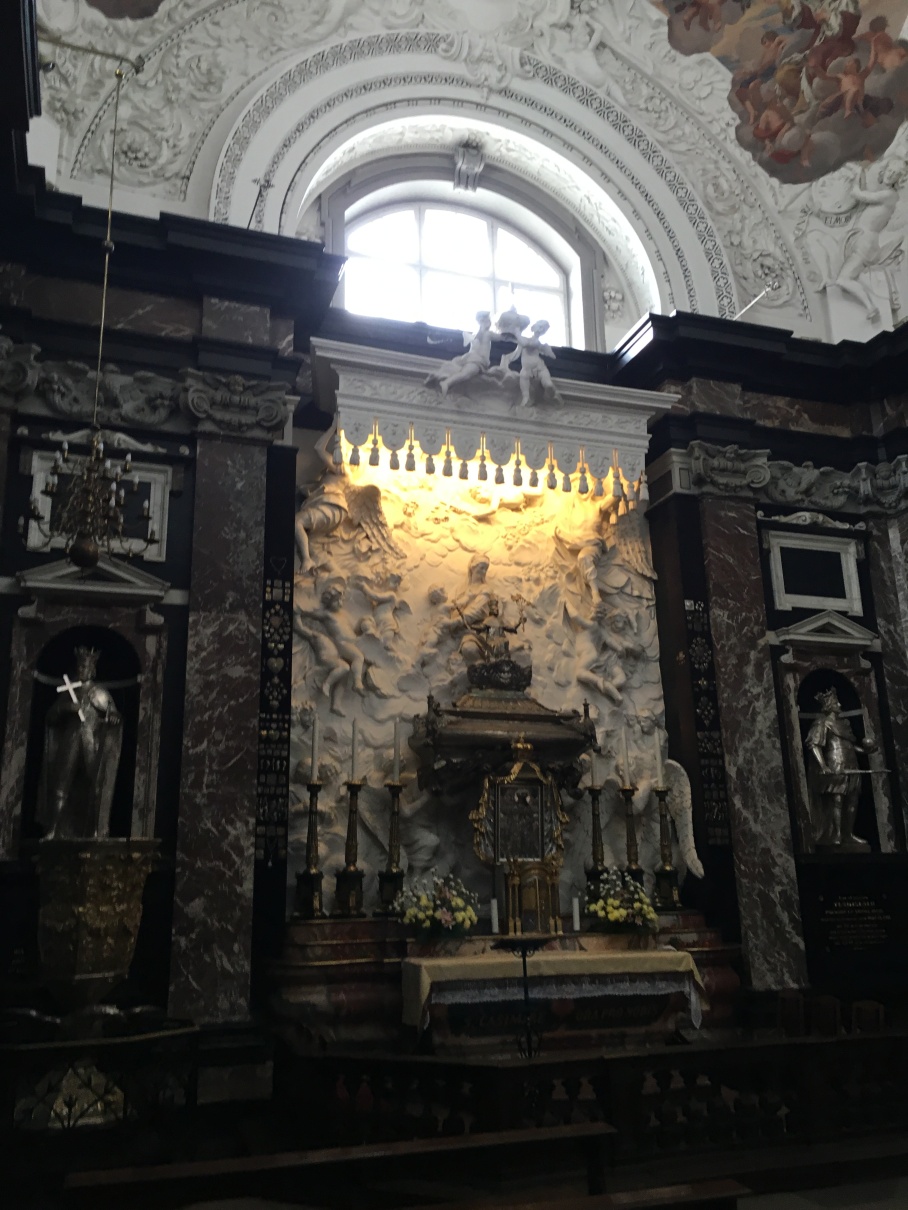 Afterwards I visited the Belfry, the bottom part of which is the only remaining portion of the Lower Castle fortification system (14th century). Throughout the centuries various tiers were added. In the 1520s it was converted into the cathedral bell tower by the addition of two tiers. In the 17th century a fourth tier was added to house a clock, of which the original mechanism is used today. Finally, in 1893, the tower was crowned with a small steeple.

The top tier allowed for a couple magnificent views of the city, including of Gediminas Avenue and of the Upper Castle. 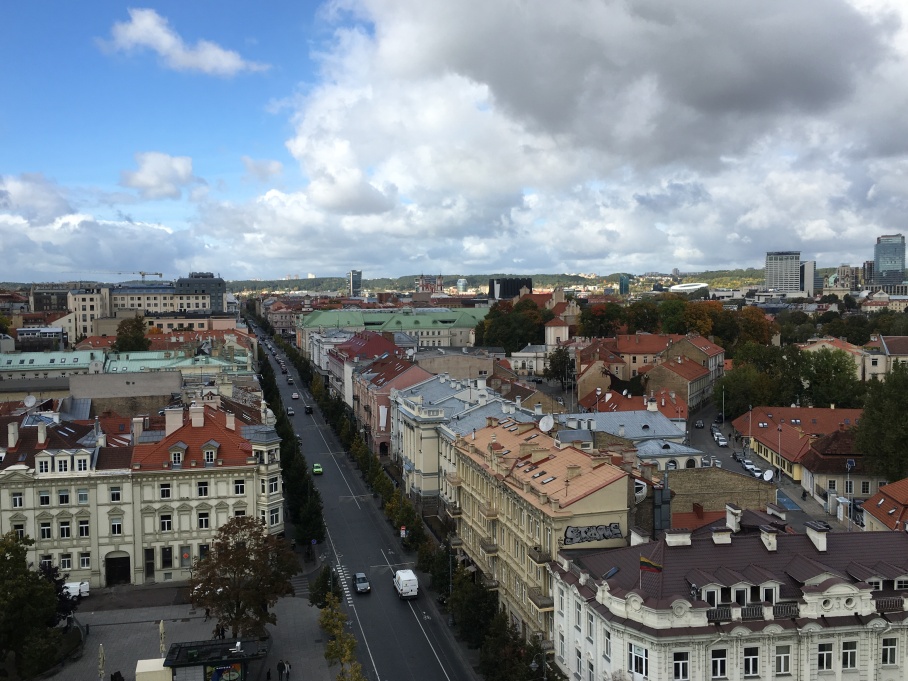 My next stop was the Palace of the Grand Dukes, controversially built atop the ruins of the Royal Palace in 2009. It is intended to replicate the original structure, but I can’t say whether or not I support the modern renovation of such an important historical marker. 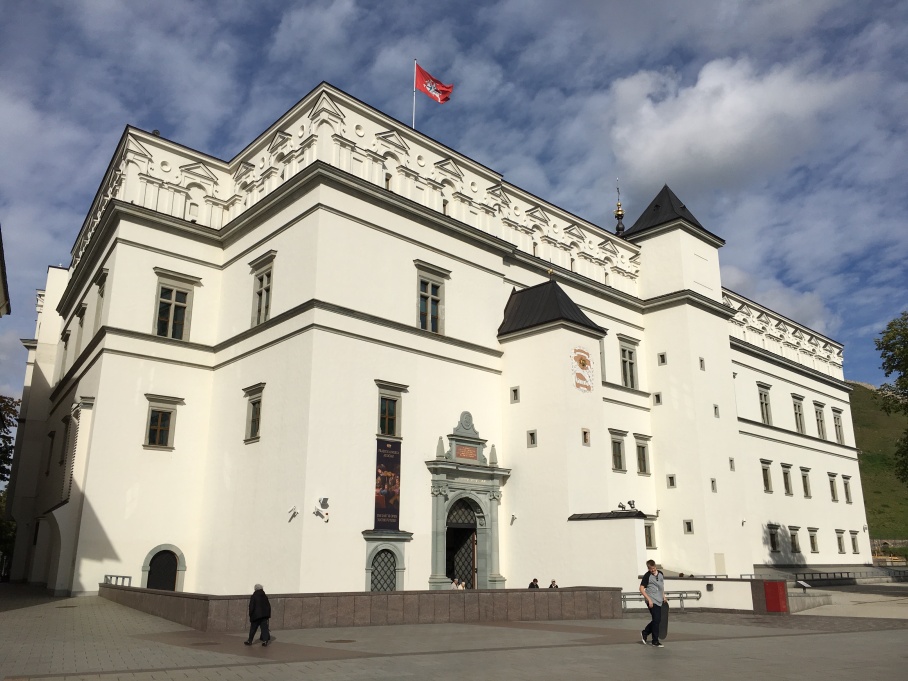 Nevertheless, the ‘Palace’ was glorious. The bottom floor was surely my favorite, the ruins of the ancient structure. Unfortunately, I was just behind a group of obnoxiously loud school children.

I didn’t spend much time in the ensuing exhibits: although jam-packed with artifacts and historical context, I have a hard time stomaching inauthenticity. I did spend plenty of time though, as anyone who knows me would expect, perusing the massive genealogy. 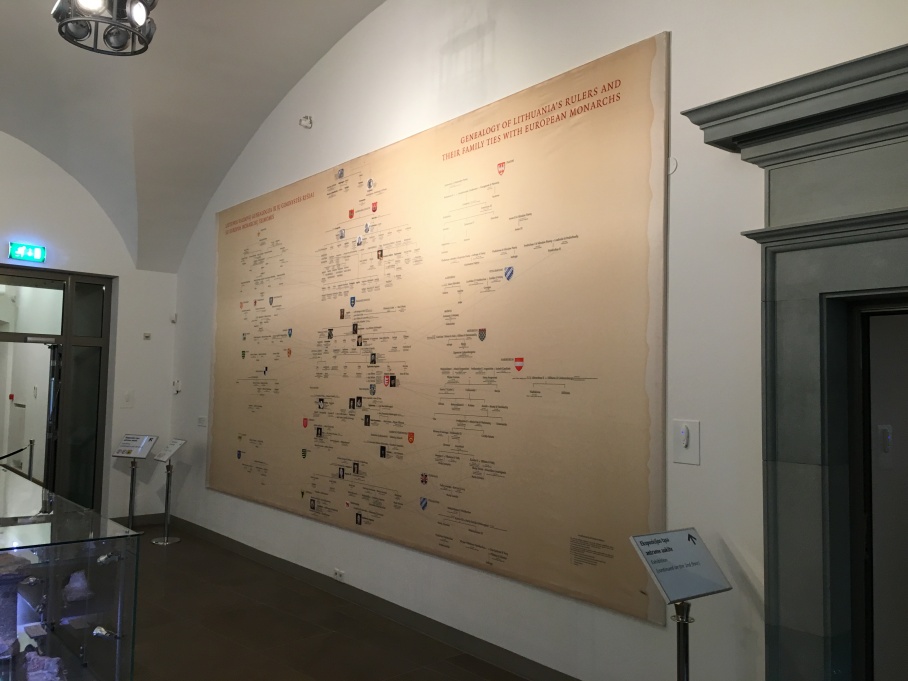 For the next few hours I studied my history in a nearby cafe.

At 4:00 I had a tour of the crypt underneath the cathedral, inside of which one can find the original entrance and floor. 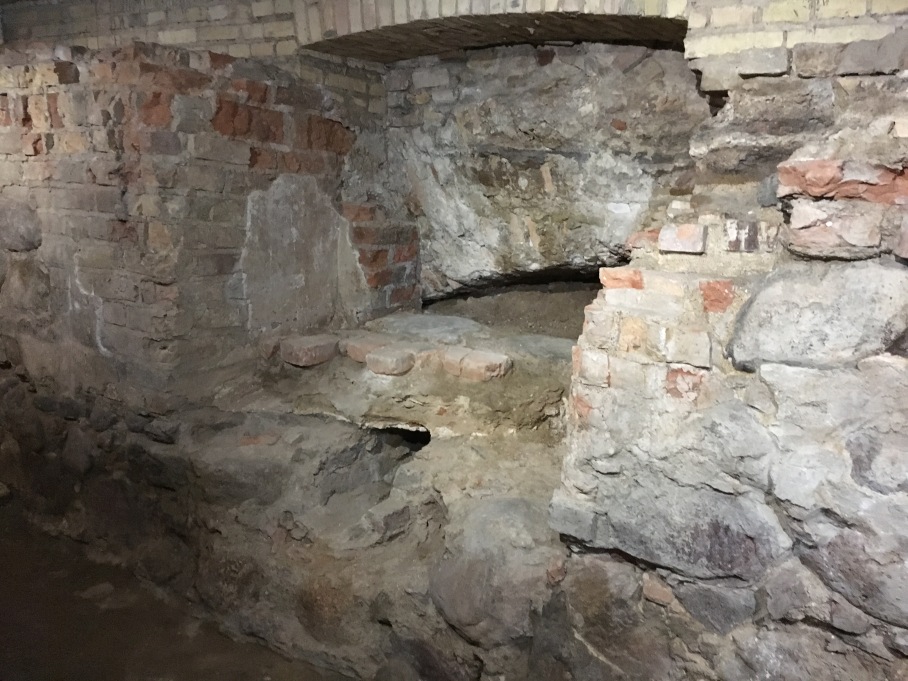 Among the hundreds buried in the crypt were Grand Duke Vytautas and his two immediate successors who pledged fealty to the ‘Supreme Duke and King of Poland’ in Krakow. Their remains have yet to be located.

Unlike his predecessors and successors who preferred Krakow, Grand Duke and King of Poland Alexander resided and is buried in Vilnius. 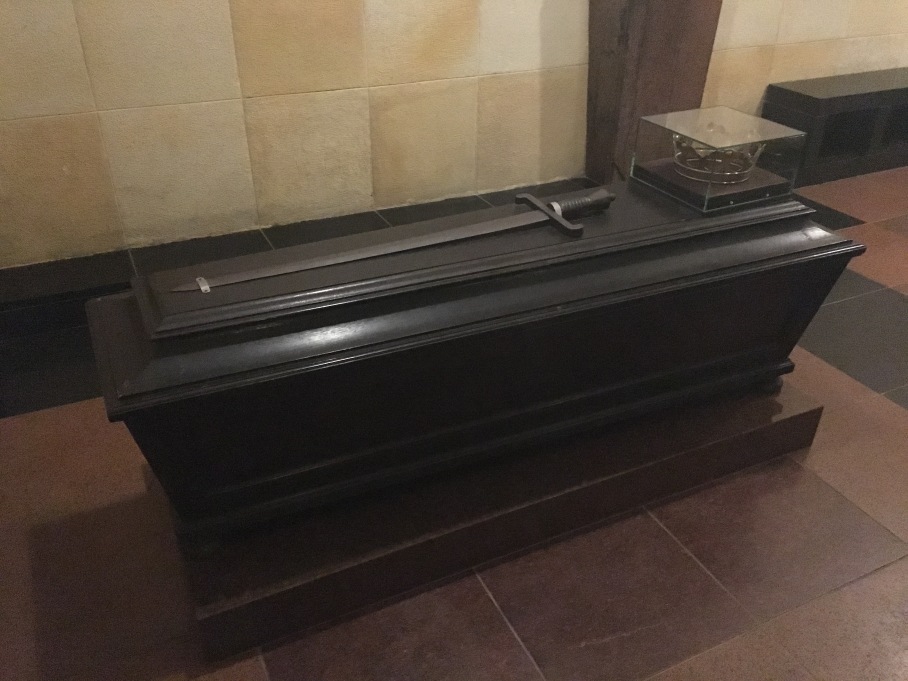 Other prominent interred include wives of Sigismund Augustus, Elizabeth Habsburg and Barbara Radziwill. The latter is revered in Lithuanian tradition for her beauty and spirit. 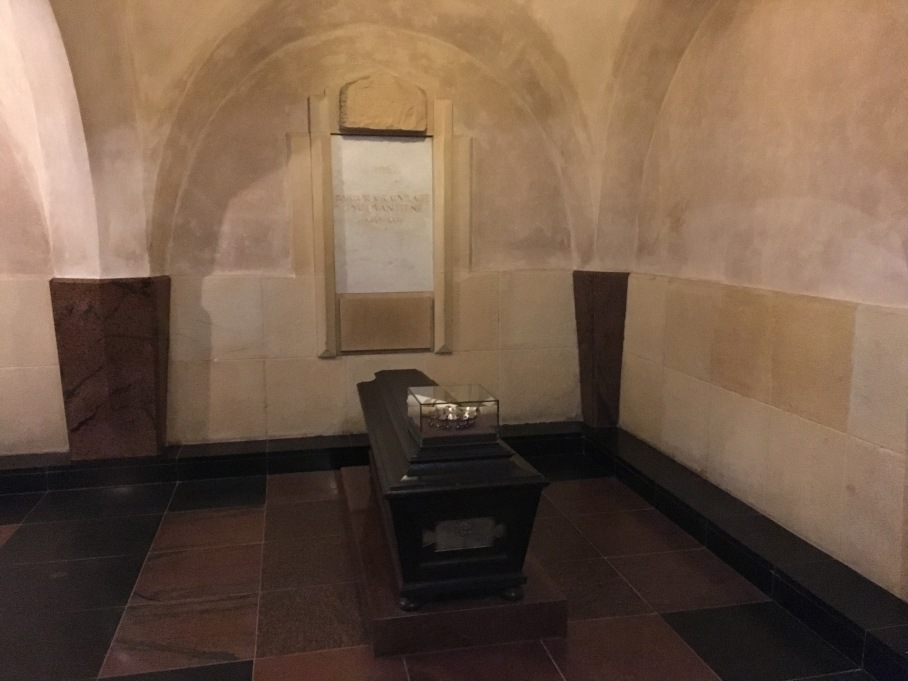 The heart of Grand Duke Wladyslaw Vasa was originally preserved there, but has since been destroyed. 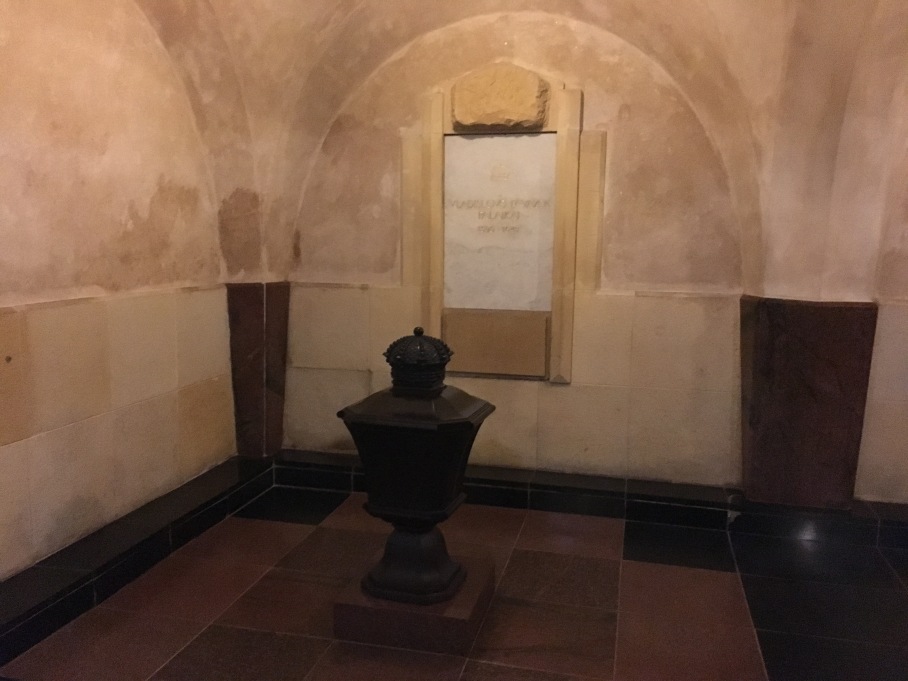 Following my tour I walked to the Jewish Cultural and Information Center for a Q and A with Professor Dovid Katz. He spoke primarily about the origins and future of the Lithuanian Jewish (Litvak) community, as well as the Litvak dialect of Yiddish (Litvish). He suggested that Zionism has had a detrimental, if not disastrous, effect on the Yiddish language and preservation of Yiddish identity. Young Ashkenazim learn Hebrew and identify ancestrally with Israel, but their ancestors didn’t speak Hebrew or live in Israel for thousands of years- they lived in shtetls and spoke Yiddish. It was so nice to hear  recurring thoughts of mine worded so eloquently. 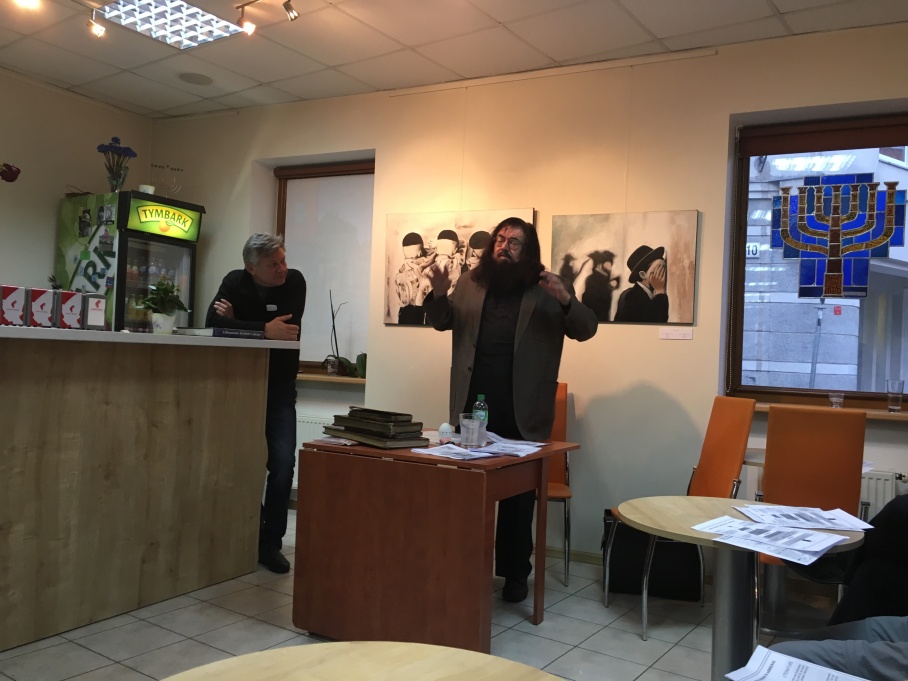 After the lecture I traveled with a group to a restaurant nearby. Dovid introduced me to Rabbi Samuel Jacob Pfeffer and asked that I provide him with technical assistance. Rabbi Pfeffer, dean of the Jewish Rabbinical Court of Lithuania, is a descendent and renowned scholar of the legendary Gaon of Vilna.

I ate Mexican for dinner and then slept.