Woke up at 6:00 and was at the station by 7:00. Bought breakfast and then boarded the train to Kaunas. Was debating whether to travel since the forecast predicted scattered showers, but given my time constraints and long list of places to see, I don’t have the luxury of wasting a weekend.

Prepared my itinerary and studied my history on the way. Kaunas is Lithuania’s second largest city, the largest in the Baltics excluding capitals. Unlike Vilnius her population is exceedingly homogenous- almost 95 percent ethnically Lithuanian. She lies at the confluence of Lithuania’s two major rivers, the Nemunas and the Neris, which facilitated her development into an important center of trade. The only member of the Hanseatic League in the entire Grand Duchy, Kaunas flourished for centuries. She suffered a long period of decline under Russian occupation, but in 1882 she regained acclaim when she was made the strongest point of the western frontier through a series of fortifications and passageways.  Due to the Polish occupation of Vilnius after WWI, Kaunas was designated the ‘temporary’ capital of the Republic of Lithuania. While Vilnius languished as a provincial city, Kaunas was transformed into a showpiece capital. Not only were government offices and foreign embassies established, but also a new archbishopric, an impressive infrastructure and an abundance of cultural institutions.  I arrived at 9:00.

Decided that I’d follow a practical route rather than thematic or chronological one. Followed Google Maps up a hill to reach my first destination on the outskirts of town. Didn’t bring my bag with chargers (rainy forecast), so I tried my best to otherwise preserve phone battery. 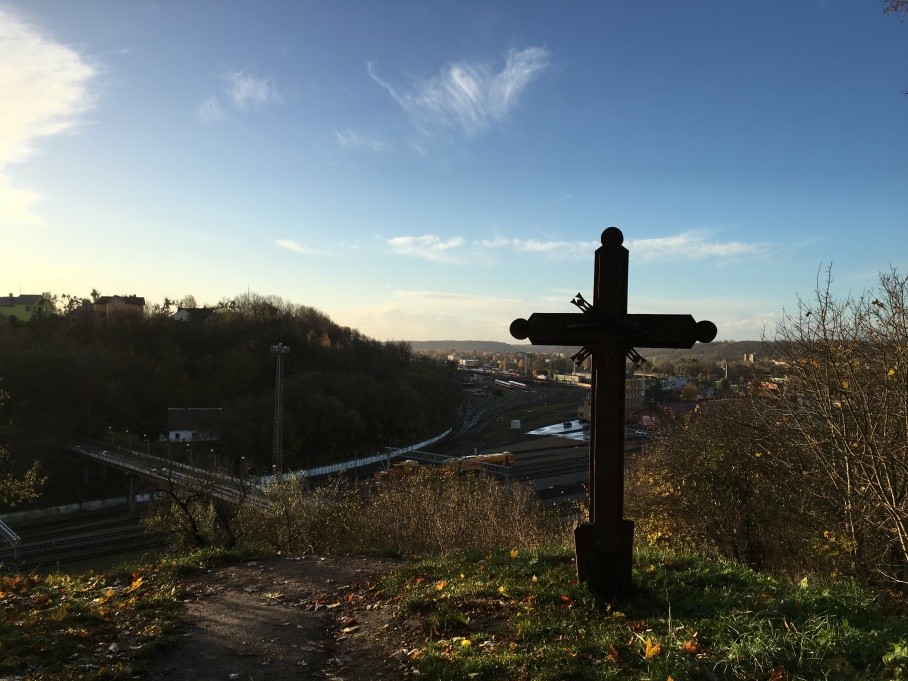 Chiune Sugihara was a Japanese diplomat stationed in Kaunas in 1939. When the Soviets occupied in 1940, all diplomats were expelled save Sugihara and his Dutch counterpart. The duo devised a plan to help Jews flee the advancing Nazi forces to Dutch Guiana (Suriname) via Japan. Alas, Sugihara was denied permission to grant transit visas. He defied orders and prepared roughly 300 visas a day, by hand, until he was expelled a month later. His efforts saved as many as 6,000 lives- the second or third most of any single person during the Holocaust. It was in his consulate that he prepared the visas. 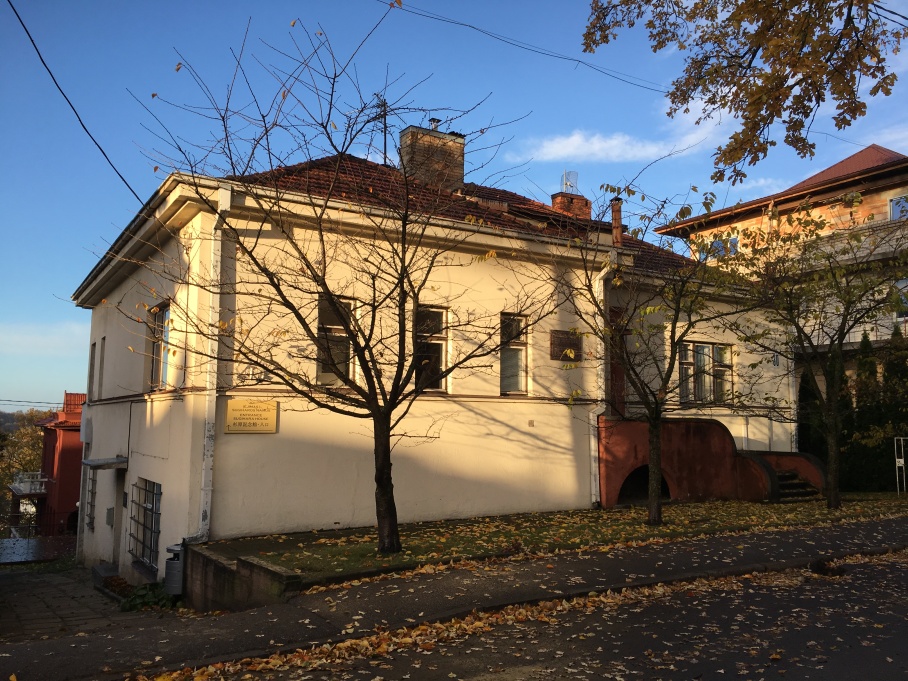 Maps led me through Vytautas Park to reach my second destination.

The Zaliakalnis Funicular is located in a northeastern neighborhood of Naujamiestis (New Town). It was built as a prestige project during the interwar period. 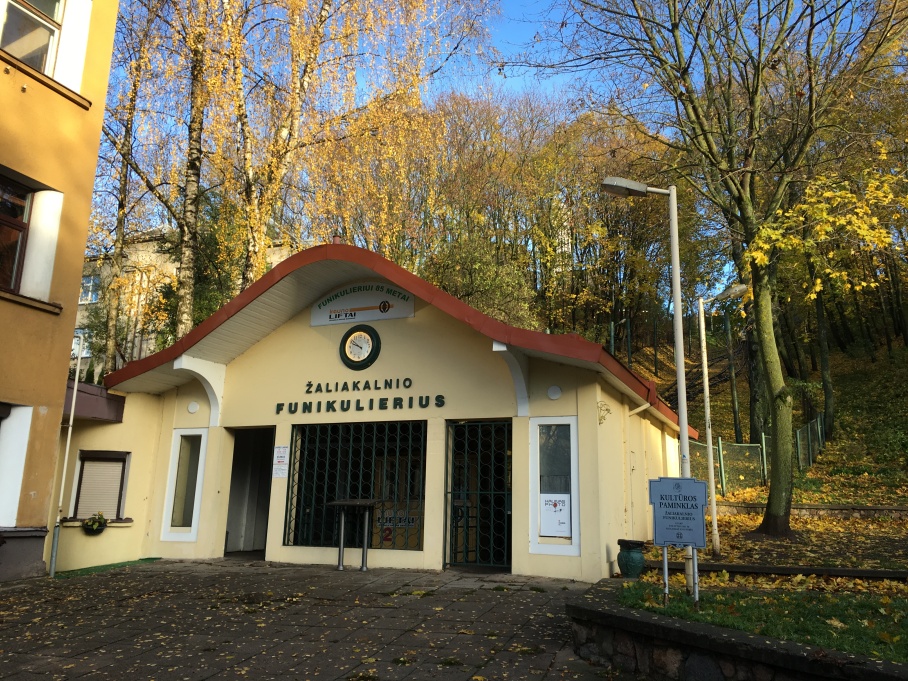 There was no one around upon arrival, so I decided to take a peak inside.

The door immediately locked itself. I tried desperately to open it, fearing I would be stuck for hours. When it started moving a few moments later, the operator ran towards me. I was obviously not supposed to be there alone, but I relaxed once I saw him laugh.

From the top of the hill I walked a short distance to the Church of the Resurrection, another interwar prestige project, described in my guidebook as the ‘single most prominent building’ of Kaunas. 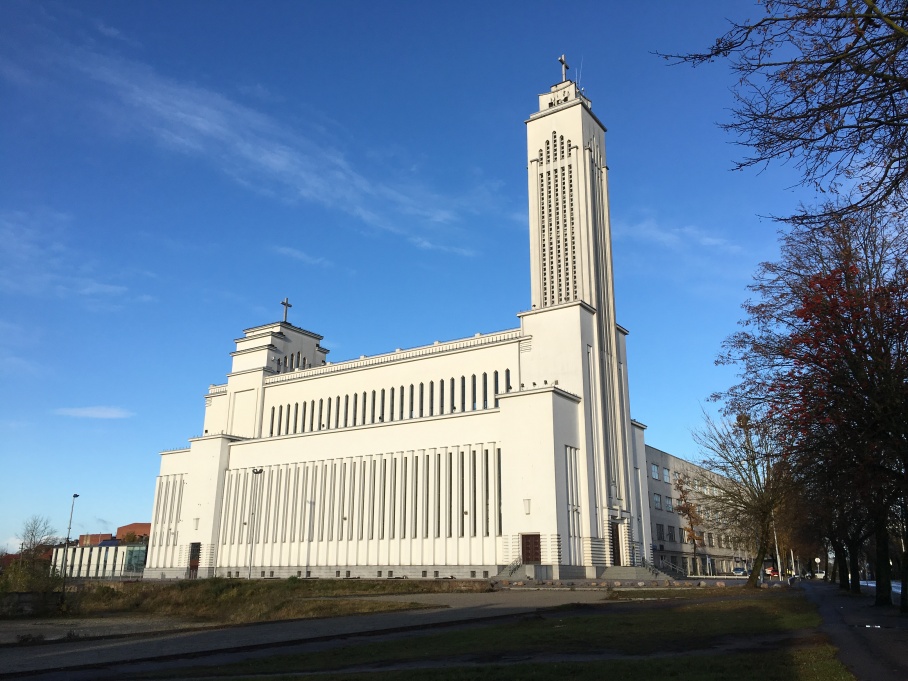 The receptionist kindly led me to the terrace (even though they weren’t yet open for visitors), but unfortunately we couldn’t unlock the door. She insisted that I wait in the sanctuary while she rectified the situation. 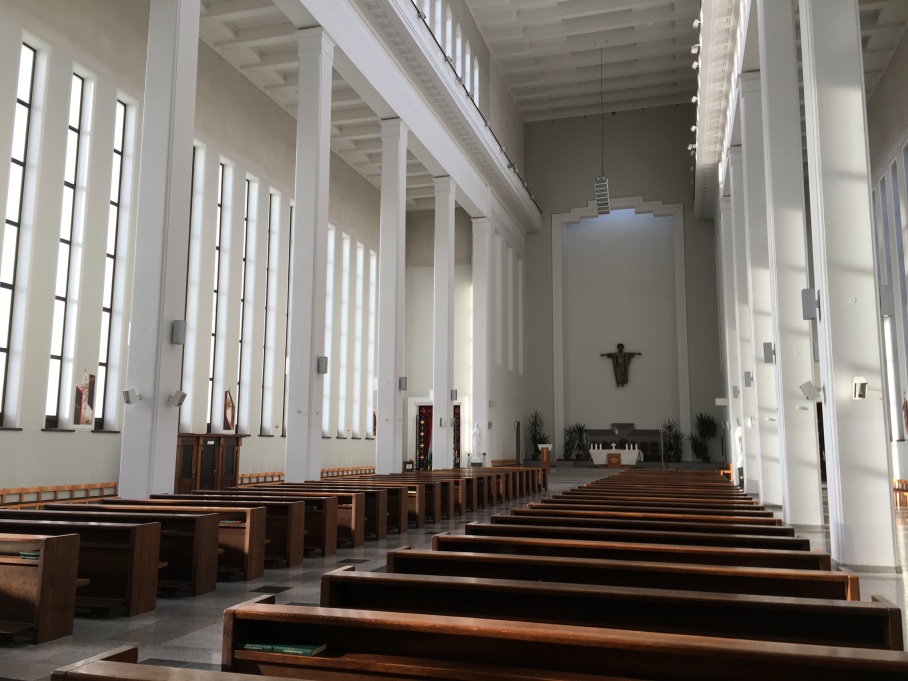 A few minutes later she returned with assistance. The rising sun made for some incredible views of the city.

The terrace itself was pretty neat. Still no rain.

Upon departure I walked back down the hill to central Naumiestis where I found Unity Square. In the center stands the Freedom Monument, erected to commemorate interwar independence. It was removed by Soviets, but reinstalled before regaining independence.

The monument faces a trail of Lithuanian nationalists leading to an eternal flame surrounded by traditional crosses.

Just north are conveniently located Kaunas’ three most prestigious museums, I skipped out on the Vytautas the Great War Museum. 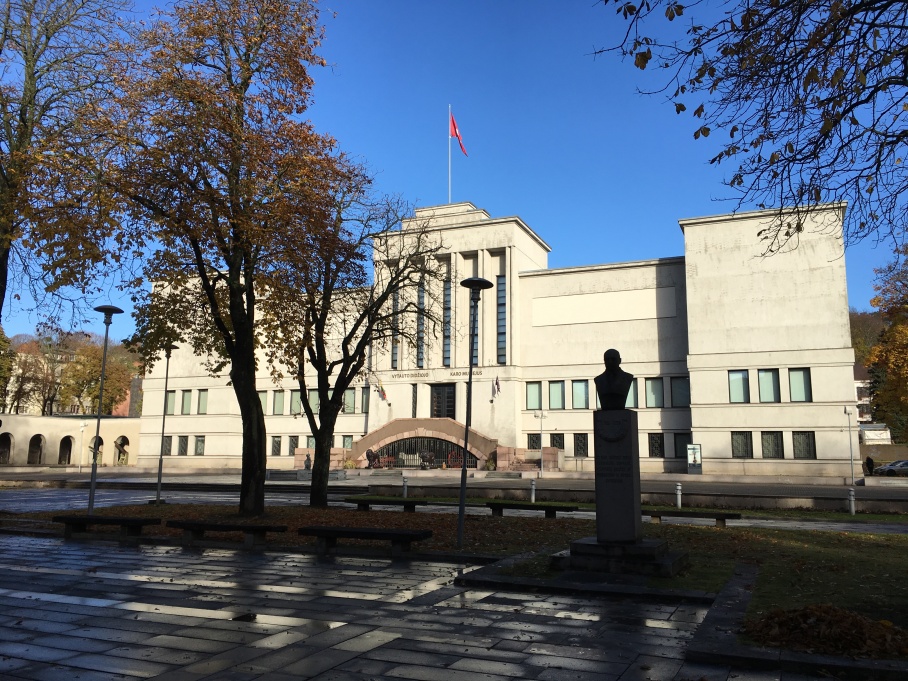 In the early 20th century Zmuidzinavicius was coincidentally gifted wooden devils from different associates, prompting his lifelong devotion to collecting devils. His collection of 260 pieces was bequeathed to the state, and after the establishment of a museum grew to over 3,000 pieces. It is the only museum of its kind in the world, holding a diverse collection of visual and applied arts, masks and souvenirs.

The first two floors were dedicated exclusively to Lithuanian crafts. The devil played a prominent role in local pagan folklore, where he was regarded as guardian of the dead. It was only with the introduction of Christianity that he came to be an evil spirit.

It became quickly apparent just how much perceptions of the devil were inspired by Jewish stereotypes.

The third floor housed a collection of devils from around the world.

I took a brief gander into Zmuidzinavicius’ home before moving on. 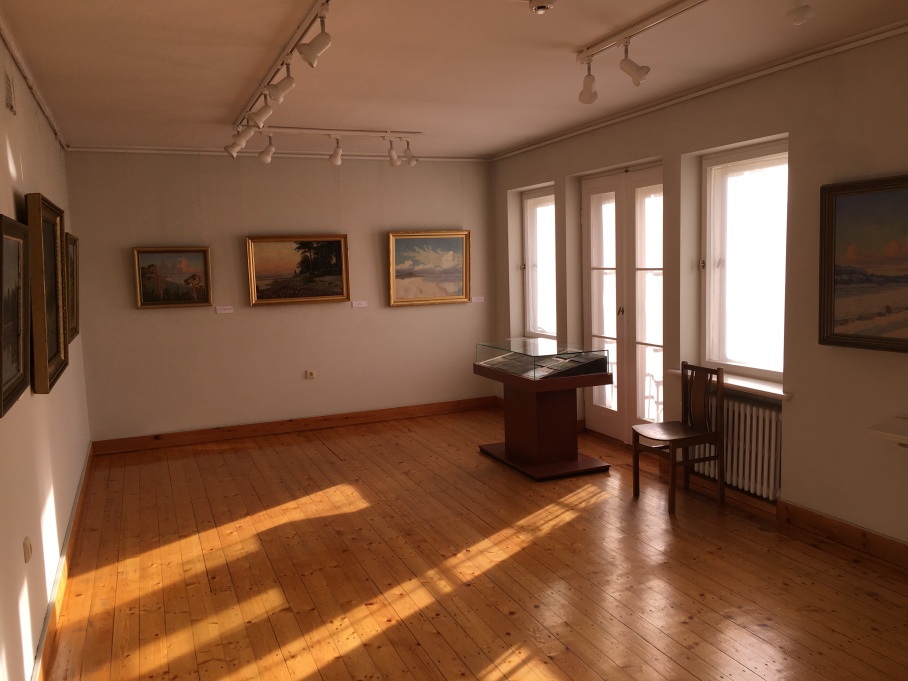 Directly across the street is the MK Ciurlionis State Art Museum, the preeminent art gallery of Lithuania. Mikalojus Konstantinos Ciurlionis (1875-1911) reached international acclaim as both a composer and as a painter, the only Lithuanian to do so in either field. In regard to painting he is classified as a symbolist, but also recognized as pioneer of abstract art in Europe.

He is known in particular for incorporating musical concepts into his paintings, such as in The Knight Prelude.

He also frequently paid homage to Lithuanian folk tradition, such as in Fairy Tale of the Kings.

His fascination with cosmology inspired some of his greatest works, most notably Rex. 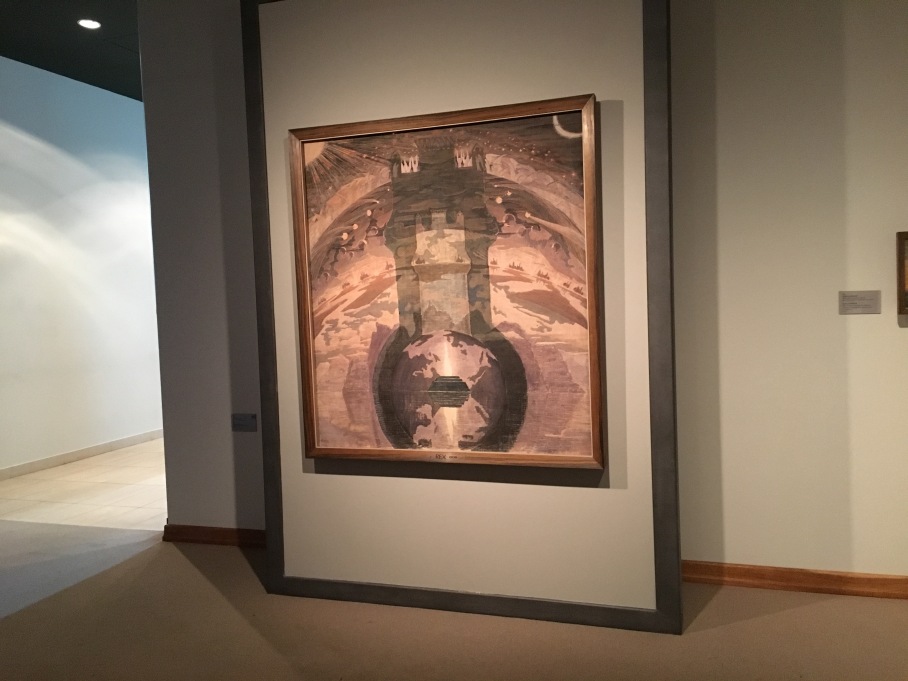 I enjoyed my walk down Liberty Avenue, the longest pedestrianized street in all of Eastern Europe.

I passed the Central Post Office, apparently a good representation of the Bauhaus-inspired architecture that dominated Kaunas during the interbellum.

It was a short walk to the only functioning synagogue (1871). 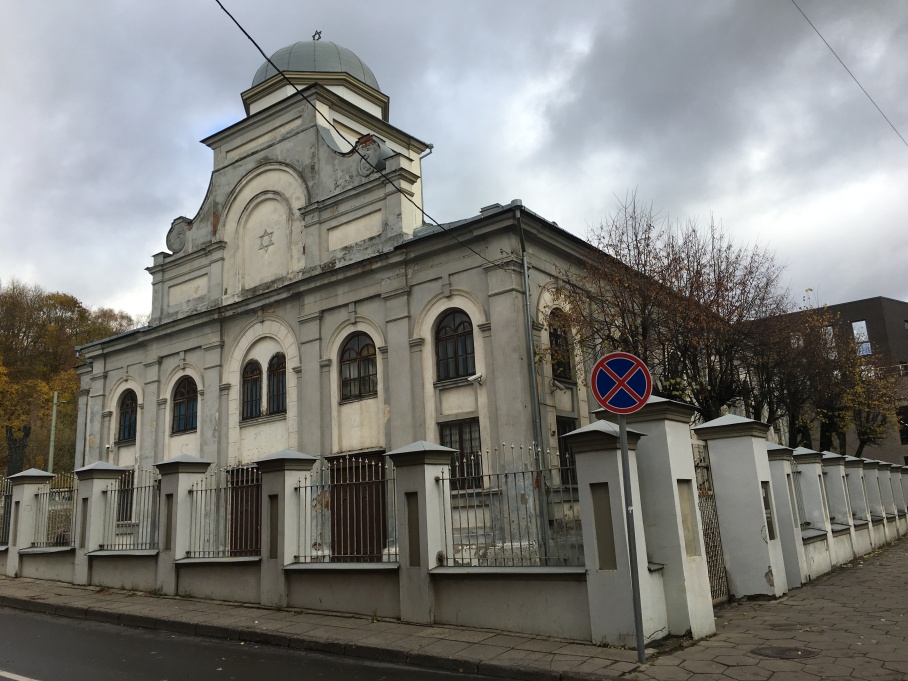 37 synagogues stood in Kaunas for her pre-war population of 32,000 Jews- the largest group in the city. Three synagogues remain, two are empty shells.

Behind the synagogue stands a memorial to the 1,600 Jewish children murdered during the Nazi occupation. 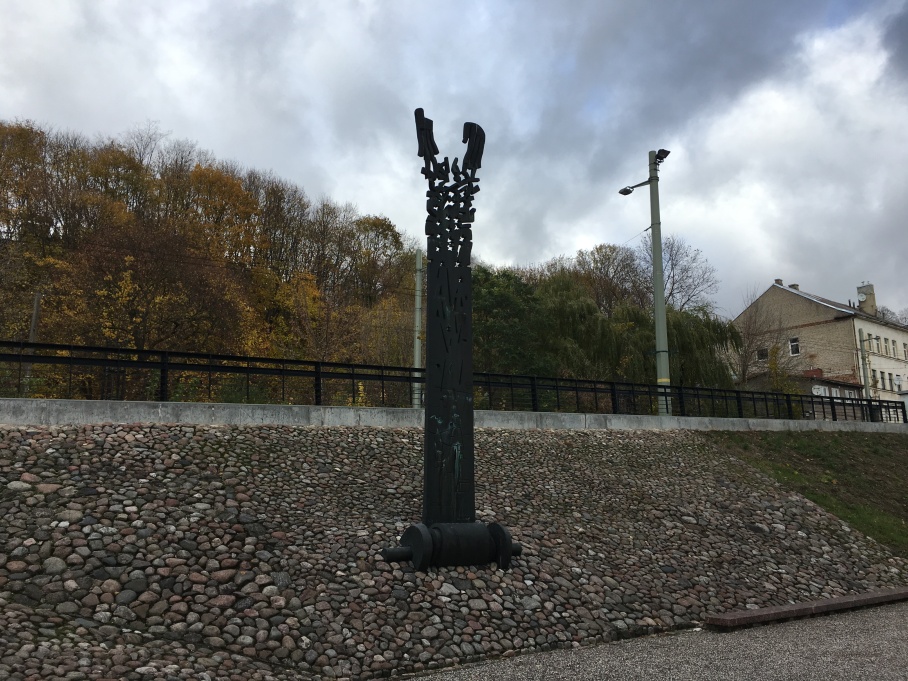 Smetona was a founding father of the new republic and served as her first president. His ideologically aligned successor was Stulginskis, who served democratically from 1920-1926. The election of liberal-minded Grinius prompted a coup led by Smetona. He would later dissolve the seimas (parliament) and rule an authoritarian regime until the Nazi occupation, which is why I was shocked that his statue stood in front the palace.

My next destination lied on the far outskirts of town. It would not have been prudent to walk or take a bus. Thankfully CityBee is available in Kaunas, but I left my international drivers permit at home. I weighed my options and ultimately decided to drive anyways.

I arrived at the Ninth Fort just after 1:00. Still no rain, in fact, the sun was shining. The gargantuan monument to the 50,000 people murdered there reigned over the complex. 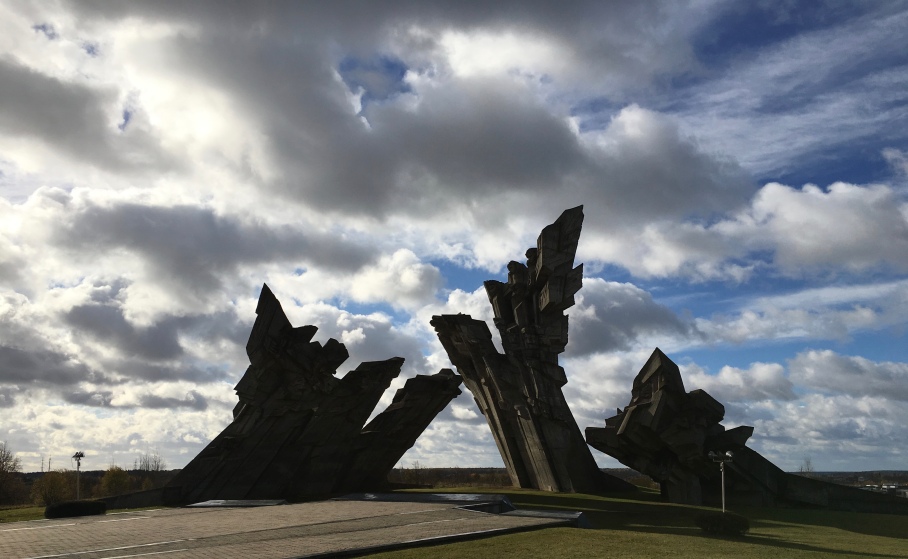 A plaque nearby read: THIS IS THE PLACE WHERE NAZIS AND THEIR ASSISTANTS KILLED MORE THAN 30,000 JEWS FROM LITHUANIA AND OTHER EUROPEAN COUNTRIES.

I walked quickly to the museum to gain context for what I was witnessing. 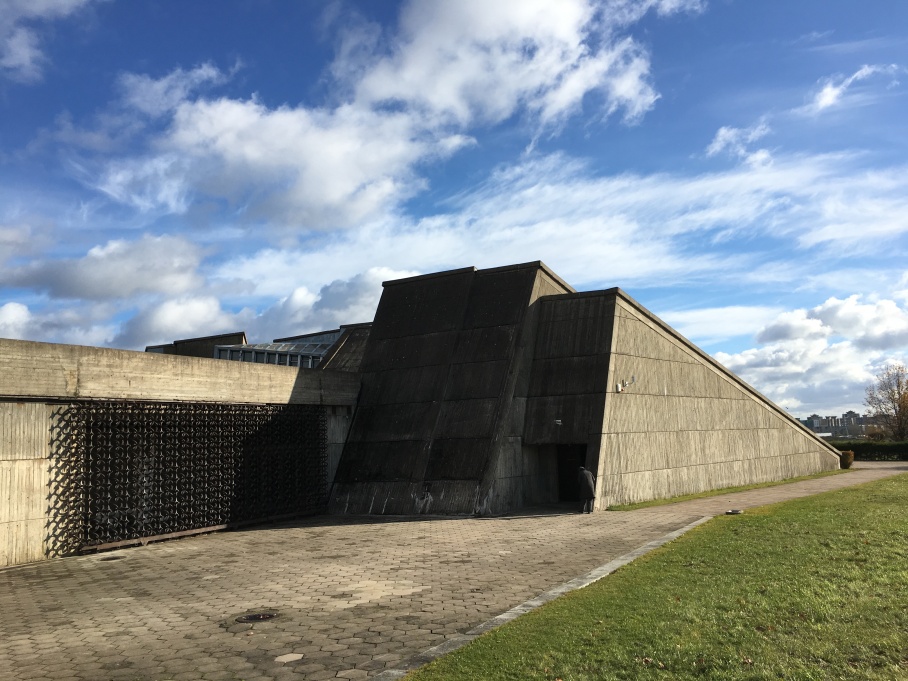 It was crowded with memorabilia from the various eras of the fort: Russian, Lithuanian, German, Soviet. Under the leadership of Smetona it was used as a prison for political dissidents and again under the Soviets.

A beautiful park stands between the museum and the fort.

The fortress was in part surrounded by a brick wall and watchtower, reminiscent of images I’d seen of concentration camps.

Inside, the bombardment of German forces at the onset of WWI was readily apparent. A massive chunk of wall is still missing where the shell of a light cannon hit the facade.

One half of the structure was dedicated to preserving her Russian history. As the name implies, it was the ninth (and final) fort built in Kaunas as part of the late 19th century fortification efforts. 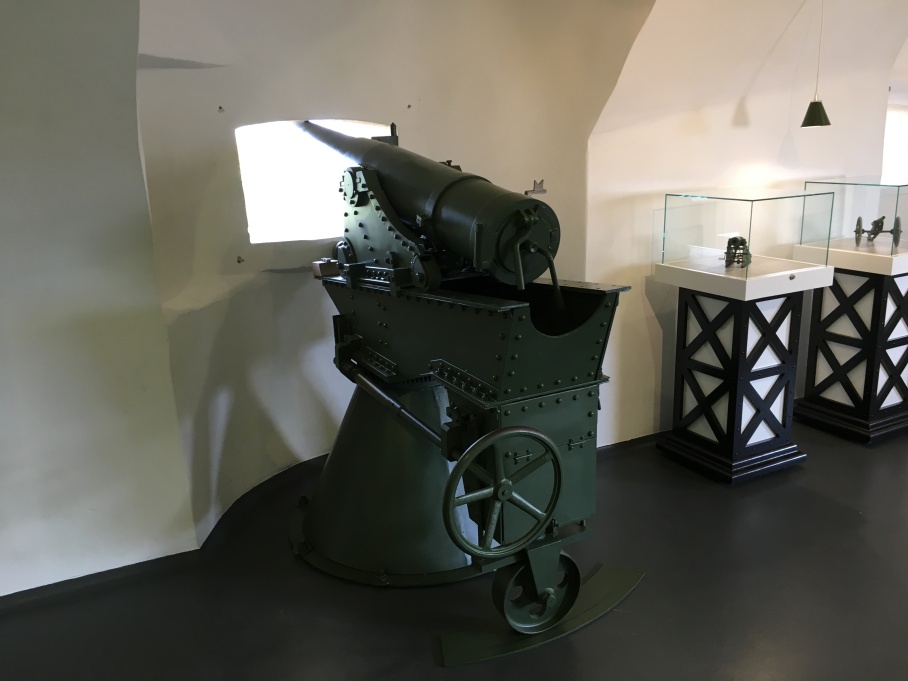 A series of bunkers surrounded the central structure.

The other half of the museum preserved her history as a Nazi slaughter house.

Estimates vary greatly, but some show that 80,000 people were murdered here (more conservative estimates put the number at 50,000). 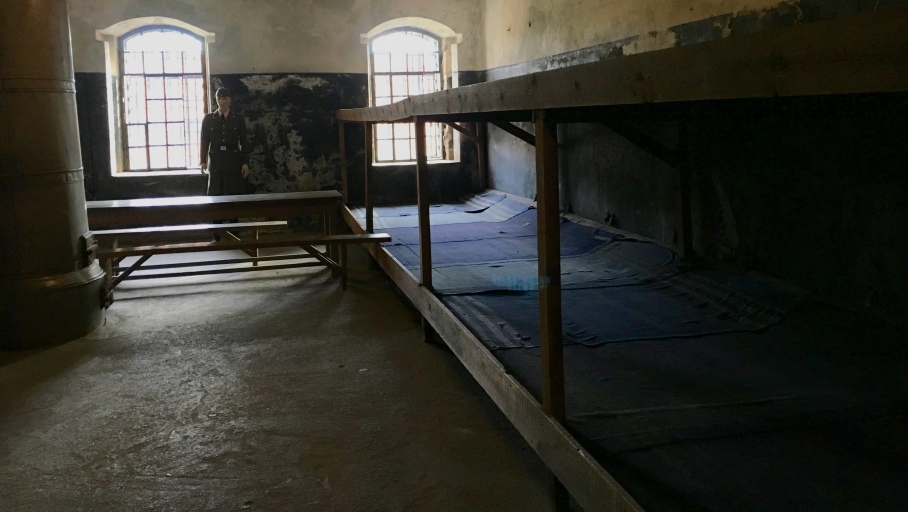 Unlike those suffocated in Auschwitz, prisoners in the Ninth Fort were shot to death.

A sign marked the ditch where prisoners were lined up, shot and burned. 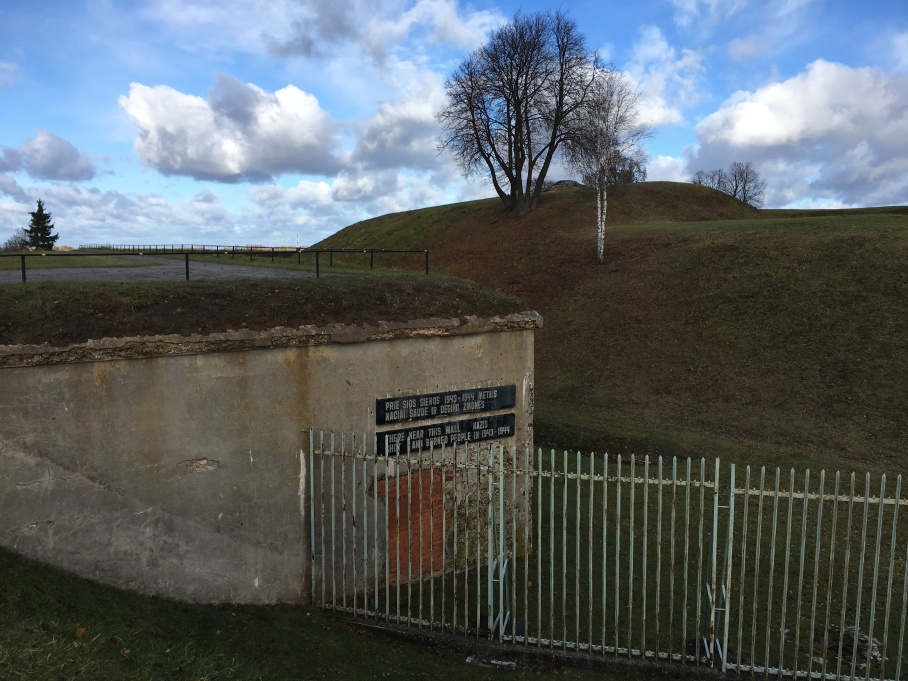 Among those were some 9200 Jews who were led from the Kaunas Ghetto to the Ninth Fort, where they were systematically murdered in a single day in 1941. Known as the Great Action, it was the single largest mass murder of Lithuanian Jews. It is only while now writing that I’ve learned what that day was: October 29th. I unknowingly stood there on the seventy fifth anniversary of this great atrocity. 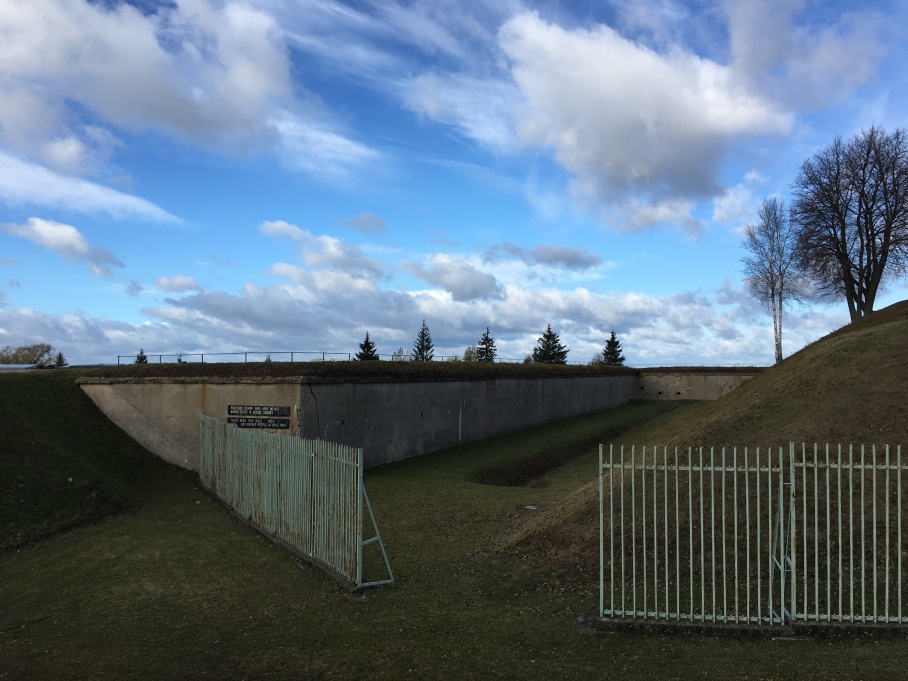 It was not a far drive to the ghetto in the historically Jewish neighborhood of Vilijampole, known to Jews as Slabodka.  Almost 30,000 Jews were concentrated inside. A slender granite statue is the only marker.

A second-cousin of my great-grandfather (Irving Lapidus) was murdered there in August of 1941. His daughter escaped to Israel, an account of her time in the ghetto was published by the United States Holocaust Memorial Museum. Jews first arrived in Kaunas in the 15th century, as of 2005 there are but 300 remaining.

I drove back to Senamiestis where I parked my CityBee. I was beyond relieved to have not been pulled over. I arrived at the Kaunas Castle at 3:00.

It was destroyed by Teutonic Knights in 1361, the ruins of her prompt reconstruction are what remain. She was thereafter made one of many royal residences, but has an otherwise unremarkable history. 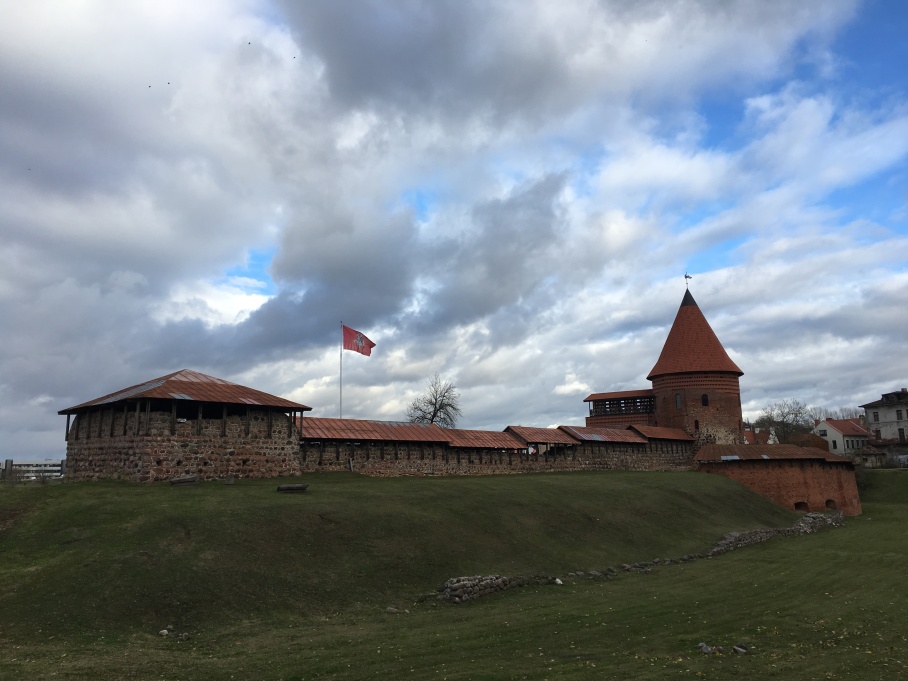 Just outside stands the Church of Saint George, a Bernardine friary from the 15th century.

Walked a short distance to the city square. In the middle stands the Old Town Hall in splendid isolation. It has origins in the 16th century and served as a residence for the Tsar in the 19th century.

On the western side of the square stands the supposedly beautiful Church of Saint Francis Xavier, but I wouldn’t know because it is concealed by construction.

Just behind stands the Perkunas House in Gothic style. Her vague origins have fueled interest and speculation, but it was likely the home of a Hanseatic merchant.

Further down stands Vytautas Church. It was supposedly endowed by the Grand Duke himself after narrowly escaping death in a battle against Tartars in 1398, thus putting the date of construction at circa 1400.

It stands just off the coast of the Nemunas River, stretched across by Vytautas the Great Bridge- another prestige project of the interwar period.

A short walk back through the square led me to the Cathedral of Saints Peter and Paul, the largest Gothic church in Lithuania. It was elevated to the status of papal basilica in 1921 and a few years later became the seat of the archbishopric of the new Lithuanian ecclesiastical province. The outside was undergoing construction, but looked relatively mundane.

Thus, I was shocked to find perhaps the most elaborate and impressive interior of any church I’ve yet visited on my travels.

On an outside wall I could barely make out the tomb of the poet Maironis.

Grabbed a quick coffee before catching a bus to the train station. Opposite the bus stop stood the Vilnius University Faculty of Humanities. My phone died just before I could snag a picture.

Took the 5:30 train back to Vilnius, still no rain.