Riga underwent her most rapid period of economic and demographic growth between 1897 and 1914, which coincided with the height of Art Nouveau. With over a third of her structures built in that style, Riga has the highest concentration of Art Nouveau buildings anywhere in the world. Nowhere is it more apparent than on Alberta Iela (Albert Street), which lies one block from my hotel. I started my tour there at 10:30. 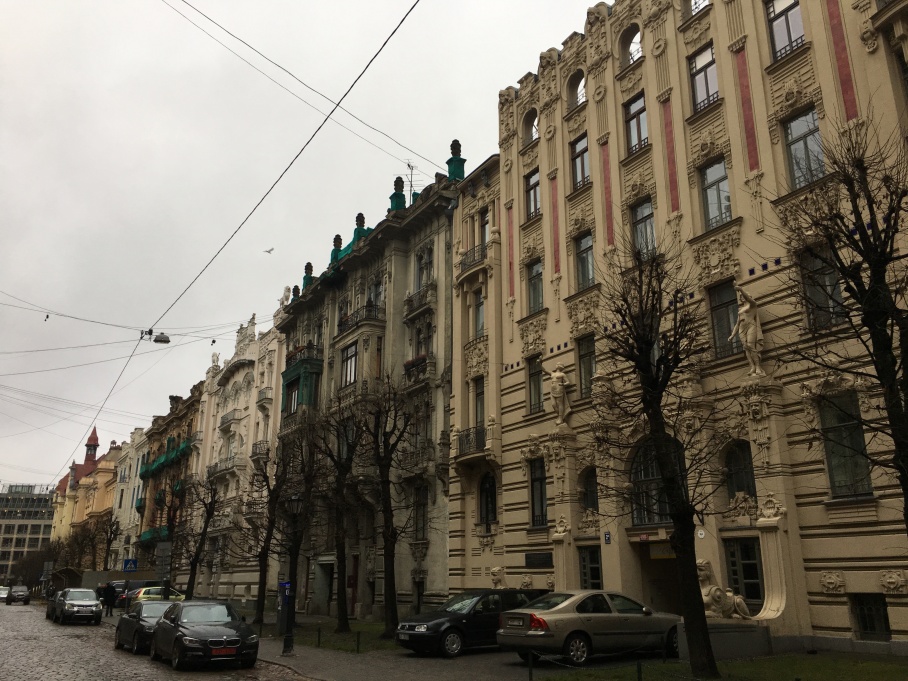 The most illustrious apartment buildings were designed by Riga’s most prolific architect, Mikhail Eisenstein, who was of Jewish ancestry. 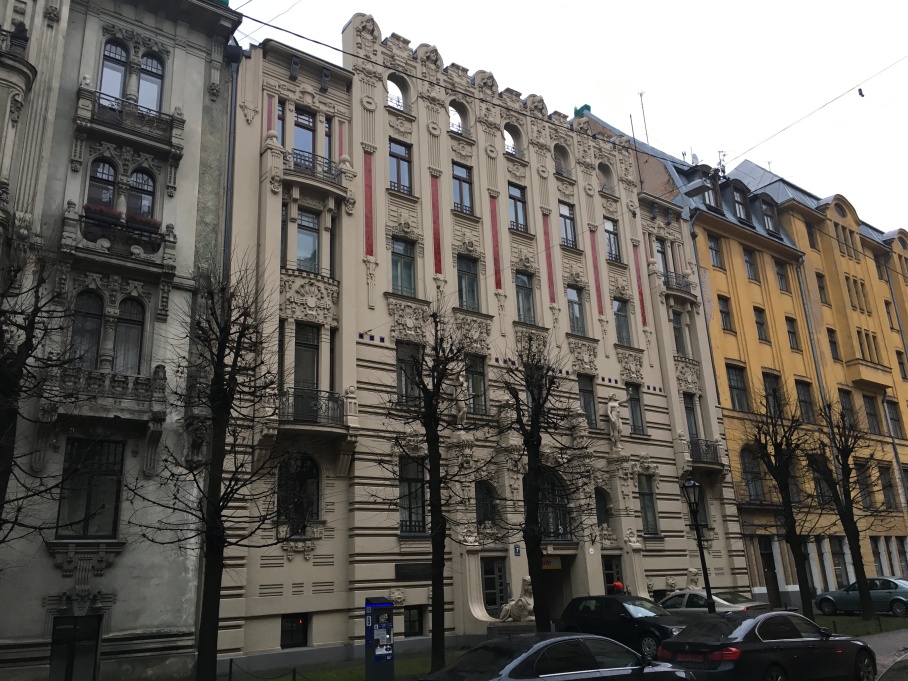 The Art Nouveau Museum stands at the end of the street. 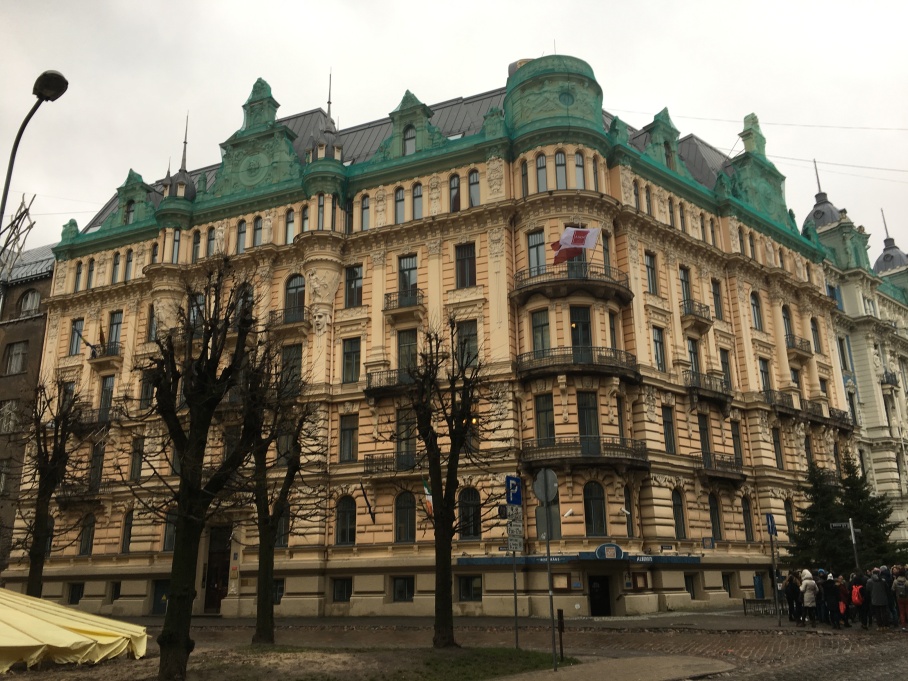 To reach Old Town I crossed the old moat, which once protected Riga from invaders. It now functions as a canal with pleasant parks on either side. 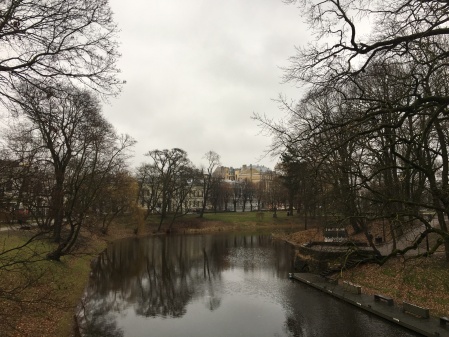 I started my tour of Old Town at the Powder Tower. It was part of the fourteenth century fortifications, but rebuilt after destruction and subsequent conquest by the Swedes in the seventeenth century. The Swedes stored gunpowder inside. It now houses the Latvian War Museum.

Nearby stands the only preserved portion of those original fourteenth century fortifications. The city wall was constructed by the Livonian Order, who founded Riga in the 13th century and ruled over it until their decimation in the Livonian War (1558-1583). Their capital of Riga was lost to the Polish-Lithuanian Commonwealth.

The Swedes captured Riga and the surrounding region in 1621, thus rejoining it with their Livonian holdings in Estonia. The Swedish Gate was built into the city wall in 1698 to provide access to soldiers’ barracks. 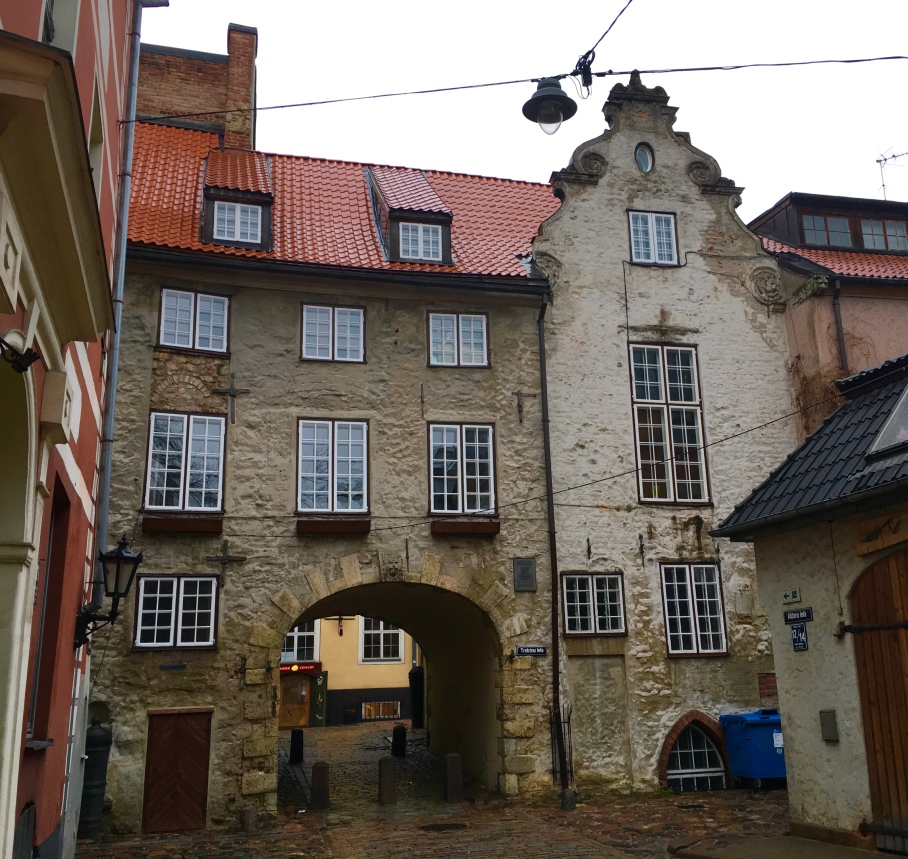 The James Barracks served their original purpose throughout Russian occupation, which lasted from the Great Northern War of the early-18th century until the fall of the Soviet Union.

A short walk down a narrow cobblestone alleyway leads to Saint James Cathedral and the adjacent building of the Saeima (parliament of Latvia).

The Cathedral was constructed in 1225, soon after the city’s founding. Over the centuries it functioned under the various religious denominations of Riga’s various occupiers: Roman Catholic, Lutheran, Jesuit, Russian Orthodox. 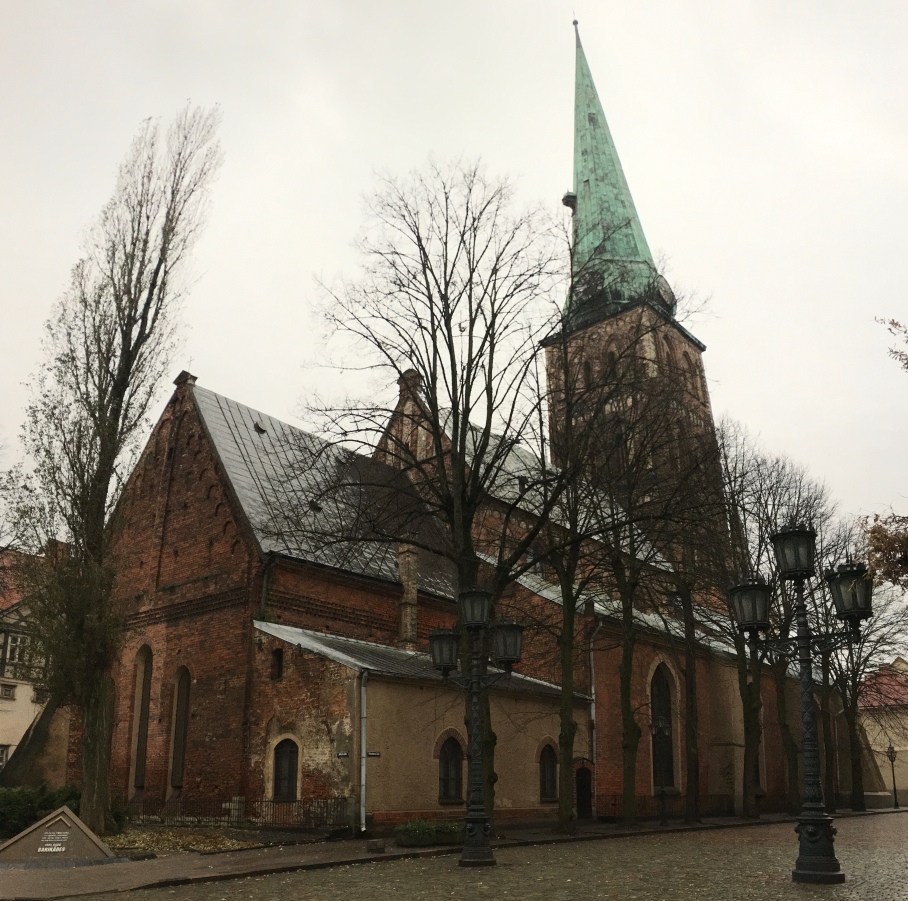 It now serves her original purpose as the Roman Catholic cathedral of Riga.

The Saeima has a right-wing populist orientation at present. 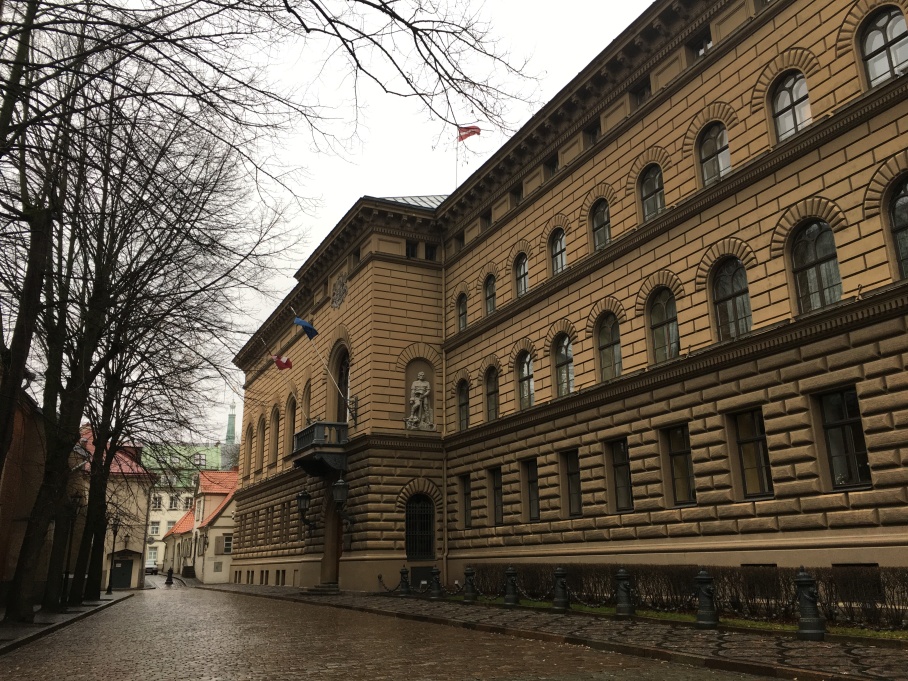 Further down stands the Three Brothers, the oldest complex of dwellings in Riga. The oldest dates to the late-fifteenth century. They are remarkable only in their longevity despite their otherwise unremarkable purpose and appearance.

Another cobblestone alleyway leads to the Riga Castle, built in 1330. From her construction until the Livonian War she served as the residence of the Master of the Livonian Order. She served administrative purposes under subsequent rulers as well. 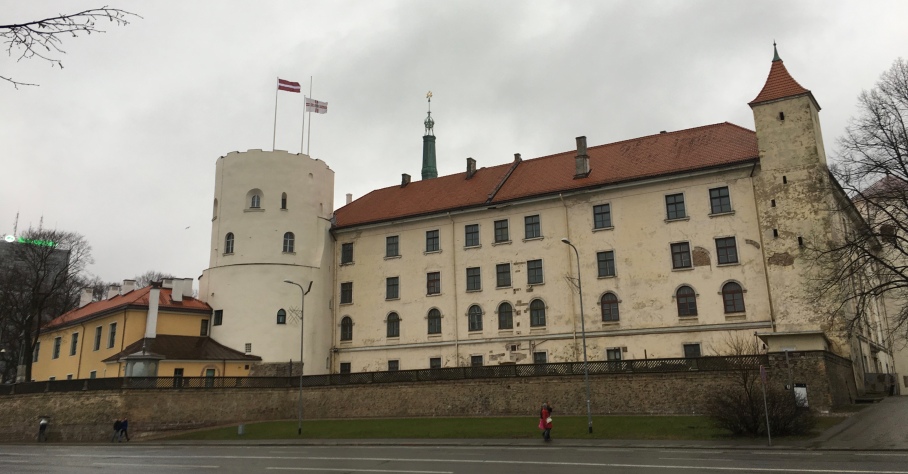 Riga Castle served as the residence of Latvian Presidents during the interwar period and again since the dissolution of the Soviet Union.

The Castle lies along the River Daugava, which enabled Riga to flourish as a center of trade.

Across the river stands the impressive National Library of Latvia, constructed in 2008.

After a short walk south I found myself at a bustling Christmas market, between the Art Museum Riga Bourse and the Dome Cathedral.

The Art Museum Riga Bourse was founded in 1920 to house the most extensive collection of foreign art in Latvia. The building was constructed in 1852 for the Riga Stock Exchange.

I spent time in the two permanent exhibitions. The top floor houses the Western Gallery, per usual I particularly enjoyed the Dutch art. I dipped into the Oriental Gallery before leaving.

The Dome Cathedral was built in 1211 by Albert, Bishop of Riga. Born in Germany in 1165, Albert was offered the title of Bishop of Riga by his uncle, an Archbishop in Bremen, provided he could conquer and convert the pagan tribes.

With the support of a crusader force, Albert successfully conquered the region in 1201. Albert established a military order so as to protect his holdings- the Livonian Brothers of the Sword. The Bishop of Riga would serve as both the religious and secular ruler of Riga under the suzerainty of the Livonian Order until Polish occupation. 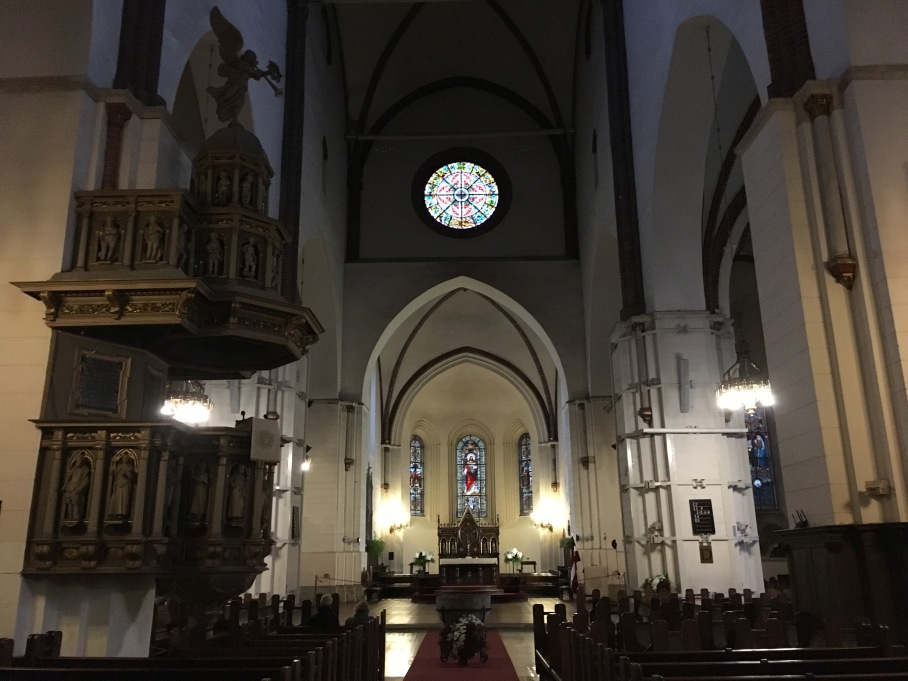 Polish occupation coincided with the Reformation, which took a firm hold in Riga where the German nobility still reigned. Lutheranism spread throughout the region and remains the largest religious denomination in Latvia to this day.

The Dome Cathedral serves as the Lutheran cathedral of Riga and remains the seat of the archbishop. 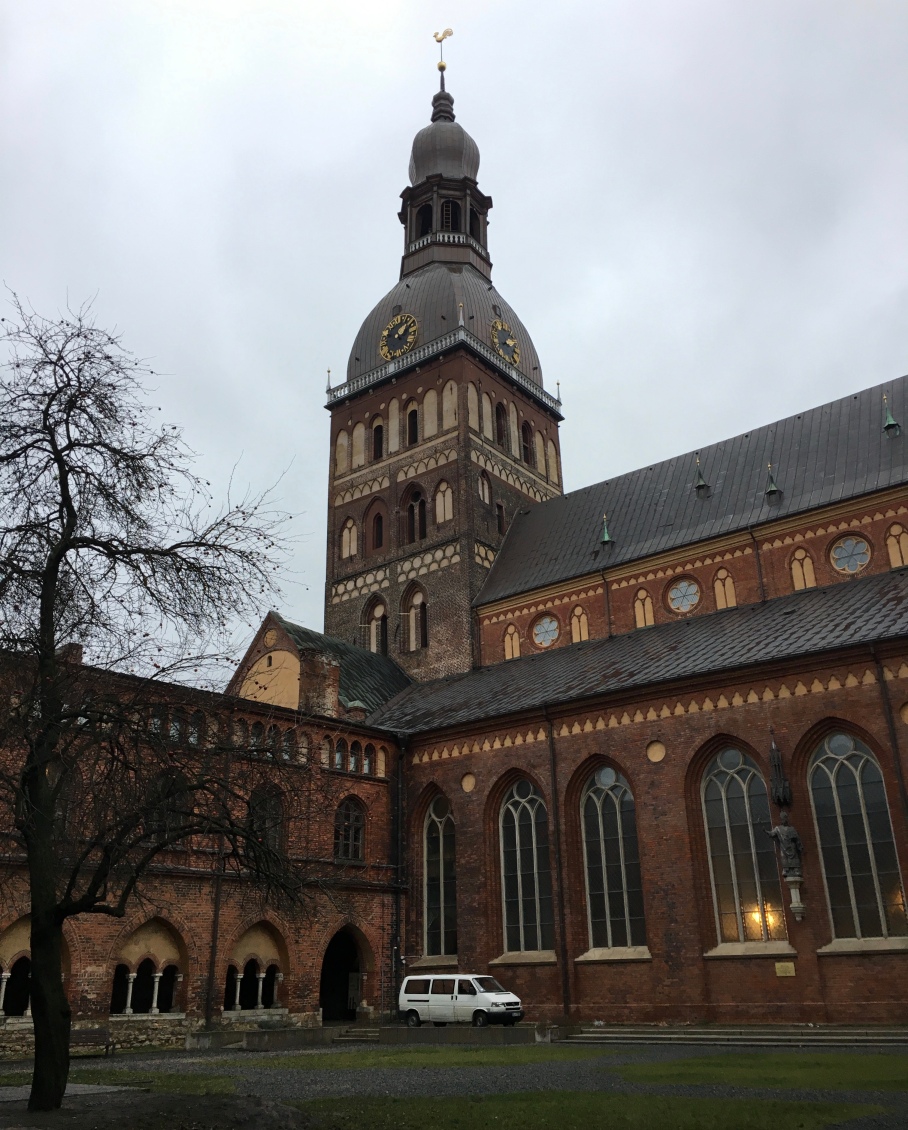 Next I visited the Great and Small Guilds, which stand on the edge of Livu Square. Like Tallinn, Riga was a base of Hanseatic tradesmen who had significant influence over town administration and social affairs. The Great Guild was built for the merchant community in 1384 and now serves as home to the Latvian Symphony Orchestra.

The Small Guild served the city’s craftsmen and artisans.

Made a short walk towards the canal to see the Freedom Monument. Identical in purpose to the Victory Column in Tallinn, it honors the soldiers killed while fighting for their independence from the newly established Soviet regime in Russia (1918-1920). 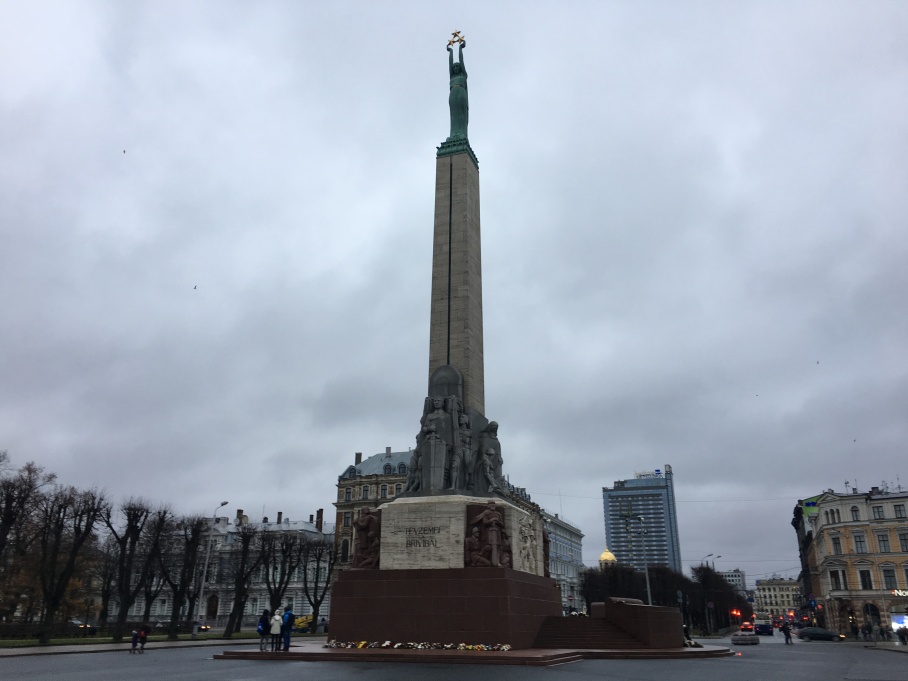 Adjacent the monument and along the canal lies Bastion Hill, created in the mid-19th century to replace dilapidated fortifications. Within her romantic confines lies a memorial to the five Latvians killed by Soviets soon before their reclamation of independence in 1991. 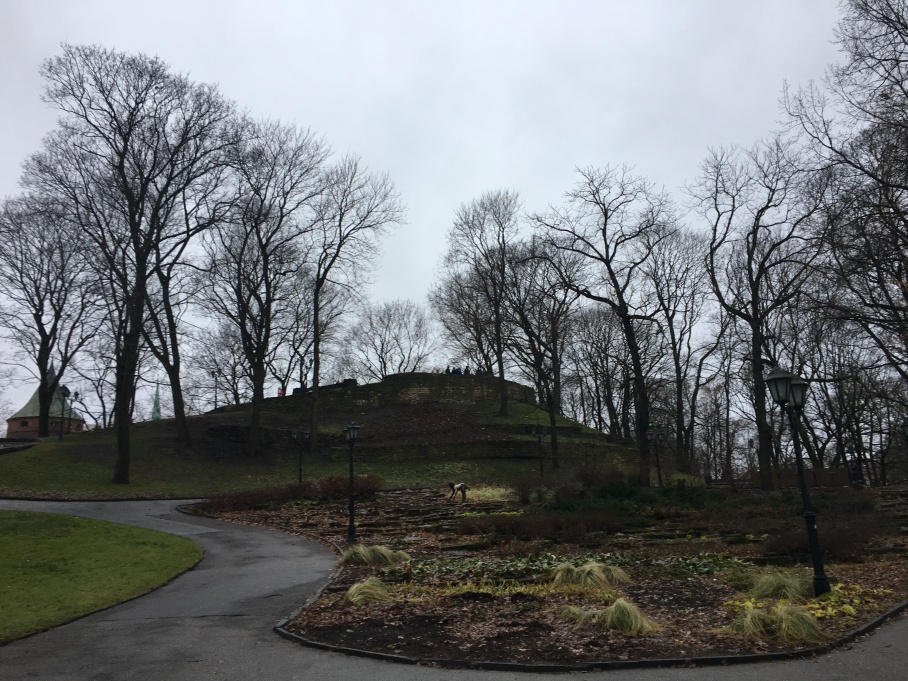 Walked to the southern portion of Old Town to find Town Hall Square. At one end stands the Town Hall, the seat of city administration since 1334. The building was destroyed by Nazis and rebuilt only in 2003. 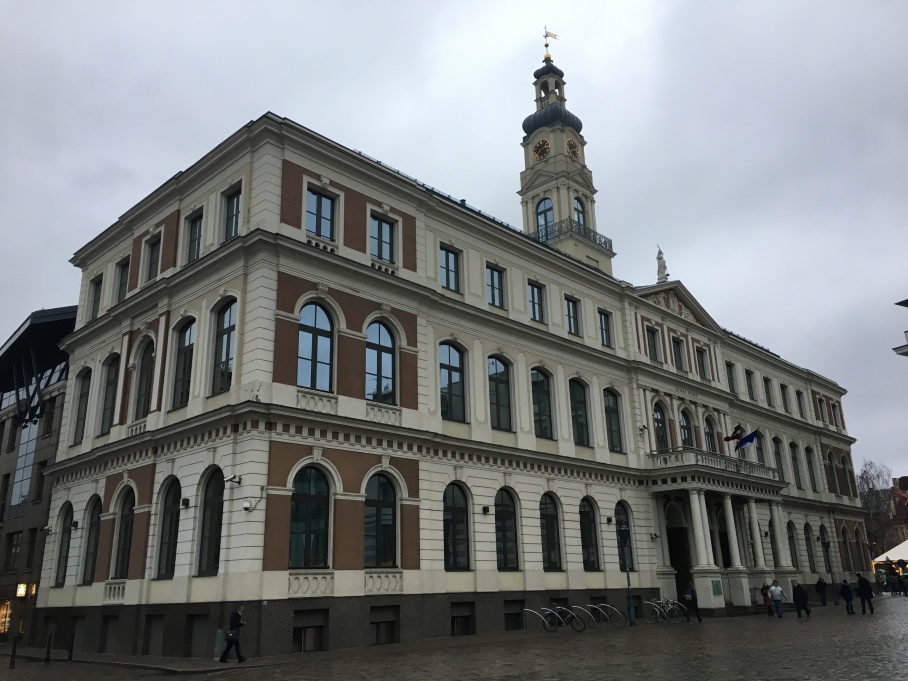 Opposite stands Riga’s most magnificent landmark, the House of the Blackheads. It was built in 1344 for the Brotherhood of the Blackheads, a Hanseatic guild for unmarried merchants. Embellishments over the following centuries, when it served as Riga’s most prominent venue, resulted in an elaborate Gothic facade. It was bombed to ruins by the Nazis, reconstruction finished in 1999.

I dipped briefly into the Metzendorff House to see how German nobility lived in the 17th century.

Much of the original foundation from 1209 still stands inside.

Her tower provided some incredible views of the city and surroundings.

Rebuilt multiple times after multiple disasters, the tower assumed her present shape in 1967.

Traveled south of Old Town to the Central Market as the sun went down. At the time of construction, during the interbellum, it was the largest market in the world. Vendors surrounded the five constituent buildings, which are repurposed Zeppelin hangars.

The interior was unimpressive except for the crowd. 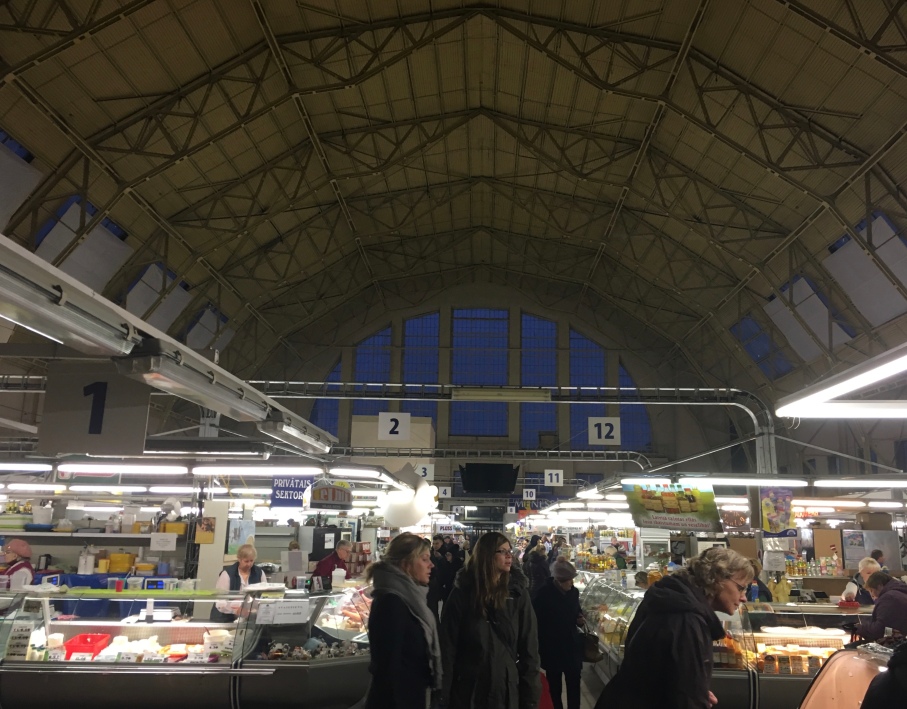 Picked up dinner on the way back to my hotel.