Woke up at 4:45, was at the station within an hour. Went through customs and boarded the train.

Arrived in Minsk at 9:45. Wandered through the massive shopping complex that encompasses the station while trying to contact my parents, but no WiFi or cell service.

Started my tour utterly exhausted, four hours of sleep didn’t cut it. Just across the station stands the ‘city gates’, erected after WWII in Stalinist style. Atop one tower hangs an 11.5 foot clock, a military trophy from Nazi Germany. The opposite proudly adorns the communist sigil of the Soviet Union. 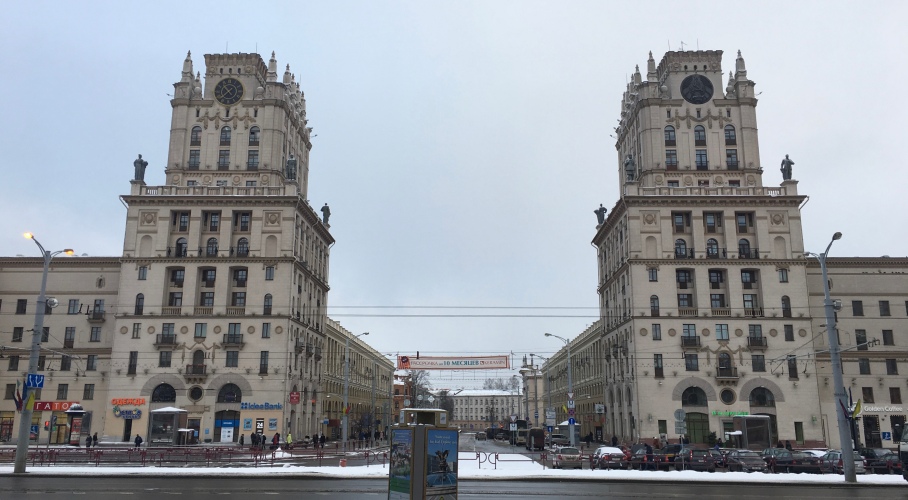 I wandered a short distance to Independence Square, which boasts Belarus’ most prominent institutions. It has been called the largest city square in Europe. 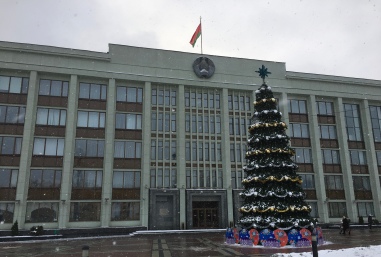 The Government House mirrors the university. Completed in 1934 it is one of the only significant buildings in Minsk that survived the war.  The building is occupied by both houses of parliament, though they receive little authority in a country described as Europe’s last dictatorship.

An imposing statue of Lenin still stands in front, testament to the Russian persuasion of the Belarus government.

It lies adjacent to the Church of Saints Simon and Helena, known locally as the Red Church. It was commissioned by a native socialite, Edward Woynillowicz, and named for his two deceased children.

The central part of Independence Avenue stretches from Independence Square to Victory Square, which at 15km long is one of the largest thoroughfares of any capital city in Europe.

The avenue is a showcase of Minsk’s most impressive Stalinist architecture, constructed between WWII and the ’60s. I was particularly impressed by the National Bank of Belarus and the KGB headquarters, the latter occupies an entire block. 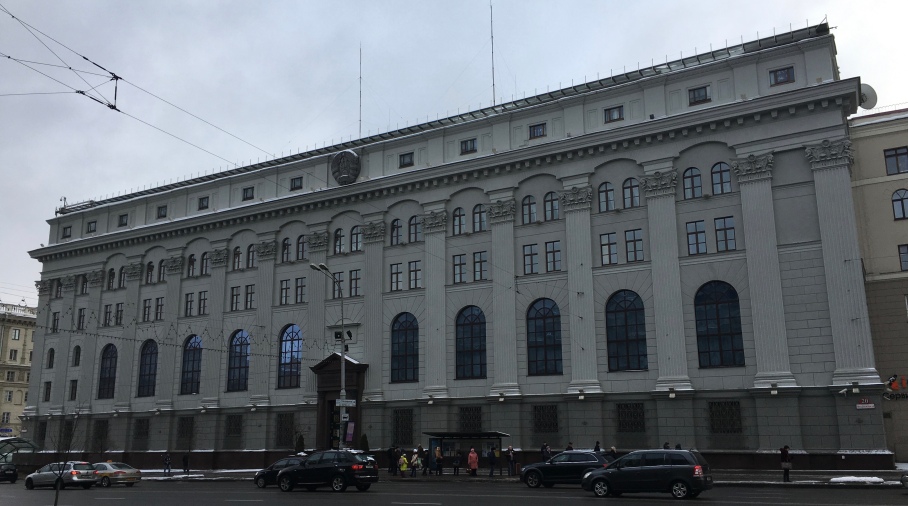 Further down Independence I arrived at October Square, which has been the site of Minsk’s most violent anti-government protests over the last decade. It is dominated by the Palace of the Republic- the largest public structure in the city and the last from Soviet times. It serves as a concert hall, but also hosts state functions. 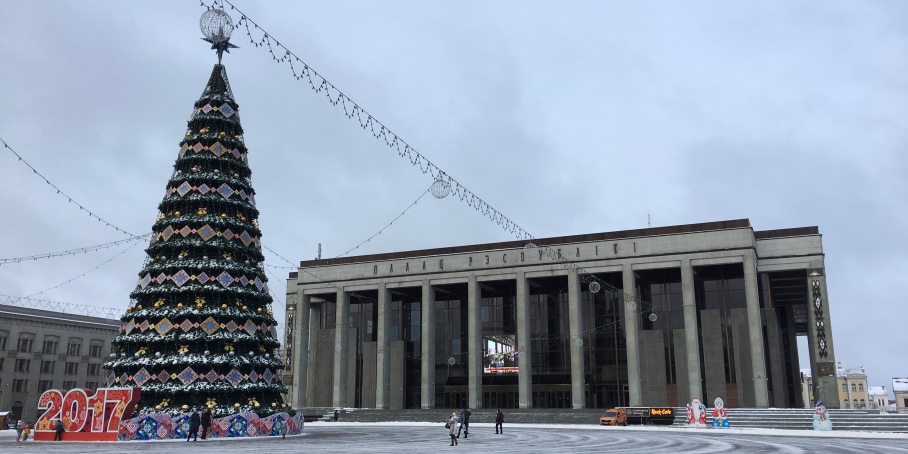 The neoclassical Trade Unions Culture Palace stands on the the other side of the square.

I strayed a few blocks from Independence to Freedom Square, with the Minsk City Hall situated in the center. The original structure was built in the late-16th century, but demolished by Tsar Nicholas I in 1851. In 2004 the Hall was rebuilt, but serves only ceremonial purposes. The City Hall is surrounded by a bevy of structures intrinsic to Minsk history.

Behind the hall stands Belarus’ Academy of Music, which has produced her most prolific musicians.

Minsk prospered under Russian occupation when she served as the center of Minsk Gubernia, one of the most populous regions in the empire. The administrative headquarters still stand along Freedom Square.

The Gubernia Headquarters neighbor the Church of the Holy Spirit, an early-17th century Basilian monastery destroyed by the Great Fire of 1835. It was entirely rebuilt in recent years. 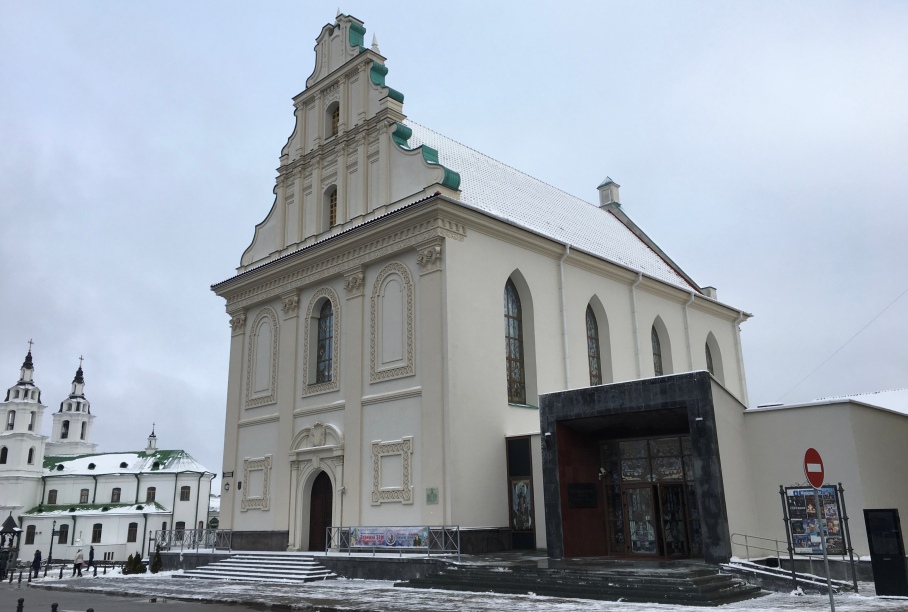 The Holy Spirit Cathedral stands behind the church. It was built in the mid-17th century to accommodate the Bernardine convent next-door.

Converted to an Orthodox church during Russian occupation, it now serves as the Cathedral of Minsk. 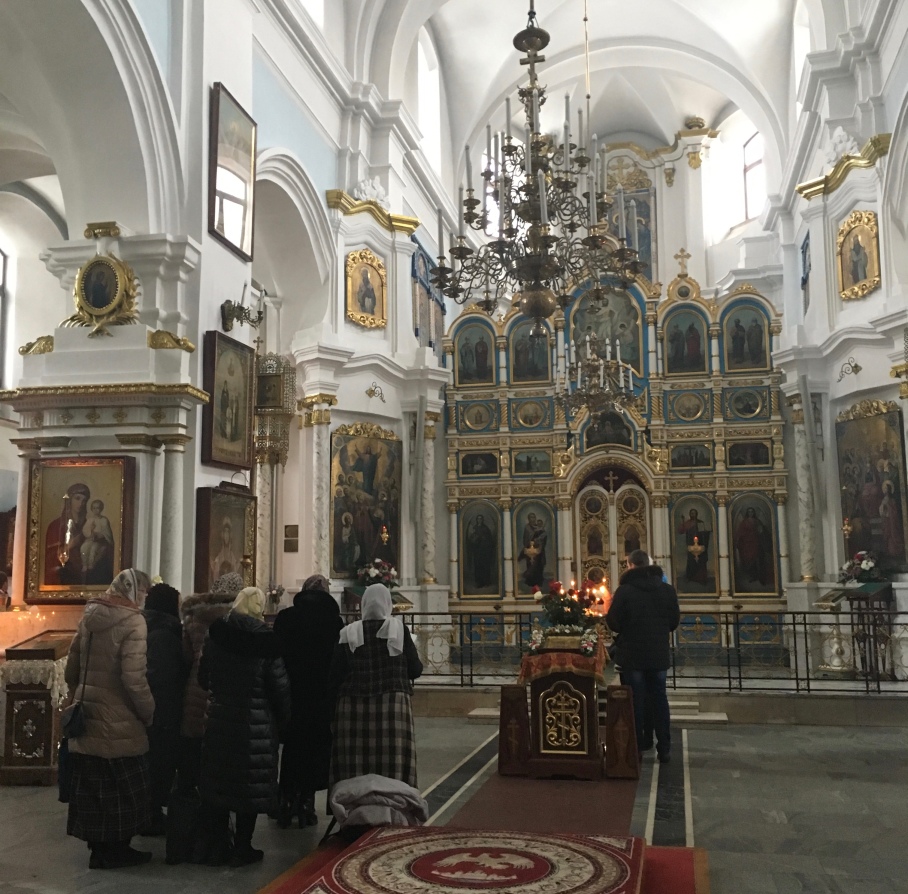 The Church of the Holy Spirit is mirrored by the Church of Saint Mary the Virgin, a 17th century Jesuit cathedral that now serves as a center of the Roman Catholic Archdiocese. Unfortunately, there was a baptismal service so I couldn’t enter. 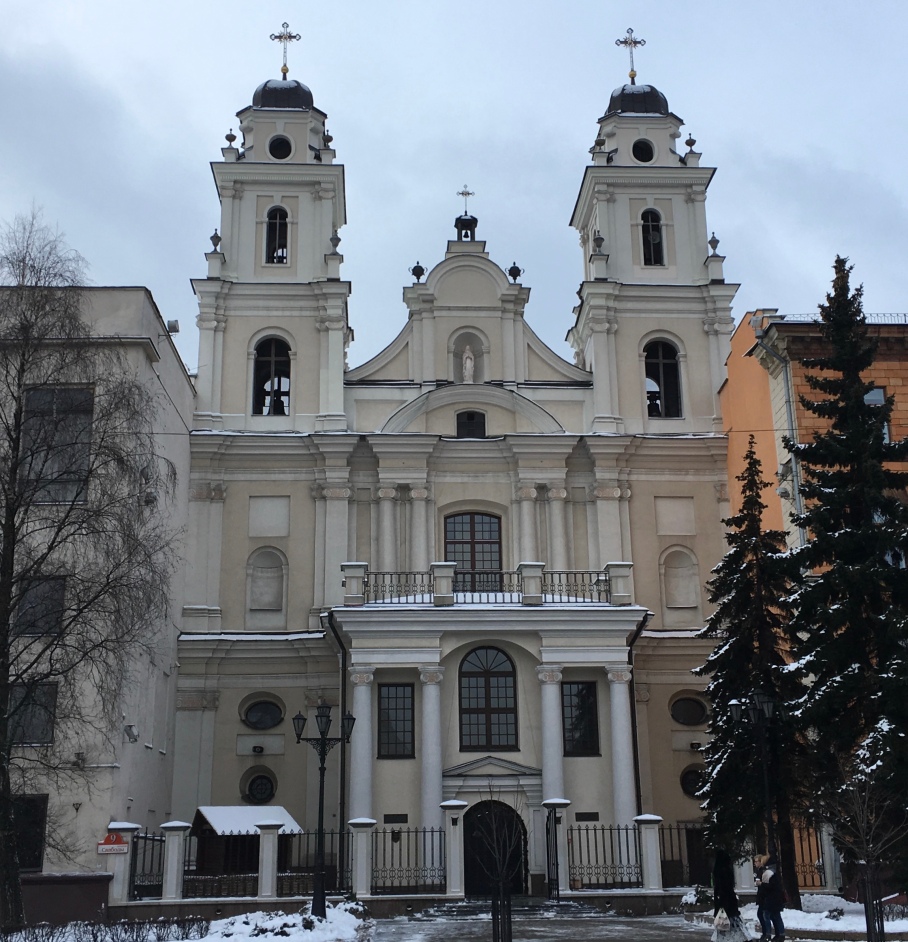 I ventured from the square to the Church of Saints Peter and Paul. Constructed in 1611, it was the only Orthodox cathedral in Minsk until the Partitions.

Belarus is a predominantly Orthodox nation with a large Catholic minority.

I continued my walk through Minsk to Trinity Suburb, said to be the most beautiful in Minsk. Perhaps because of the weather, perhaps because of my exhaustion, I didn’t find it remotely impressive. 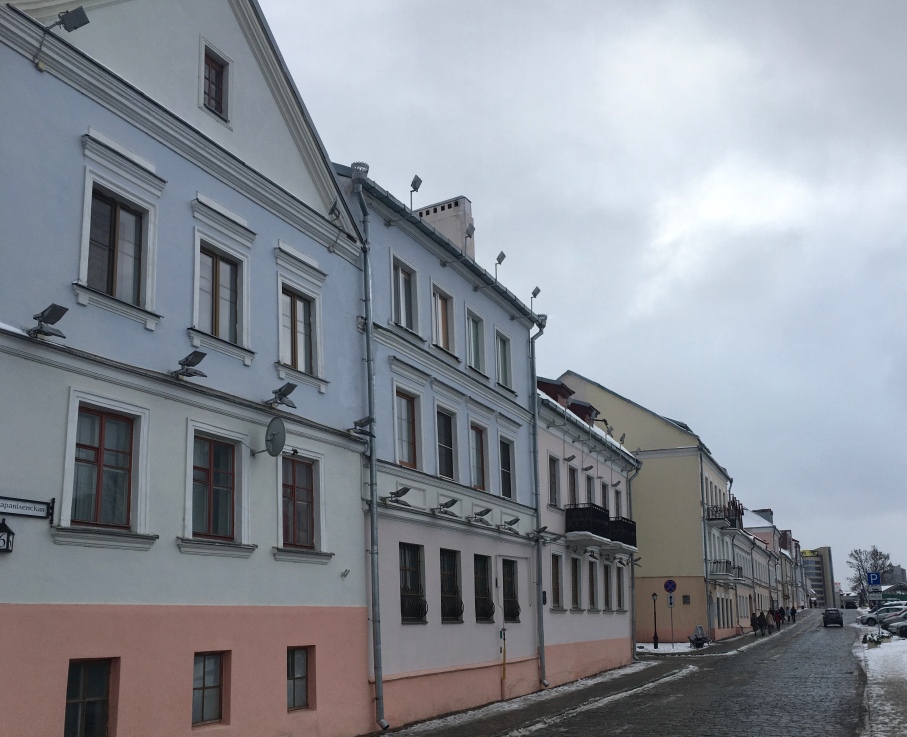 The suburb lies along the Svislach River, which divides Minsk in two. A bridge connects the suburb to the Island of Tears, which hosts a memorial to the thousands of locals killed during the war. Minsk was ravaged by battles of German occupation and retreat.

Atop Trinity Suburb stands the National Opera and Ballet Theater, constructed in the 1930s. It survived the war and has served her original purpose since.

I walked from the theater back to Independence, where I found the Minsk Circus. As an institution the circus dates to 1853, but the premises on Independence were not constructed for over a century. It was the largest circus in the USSR. 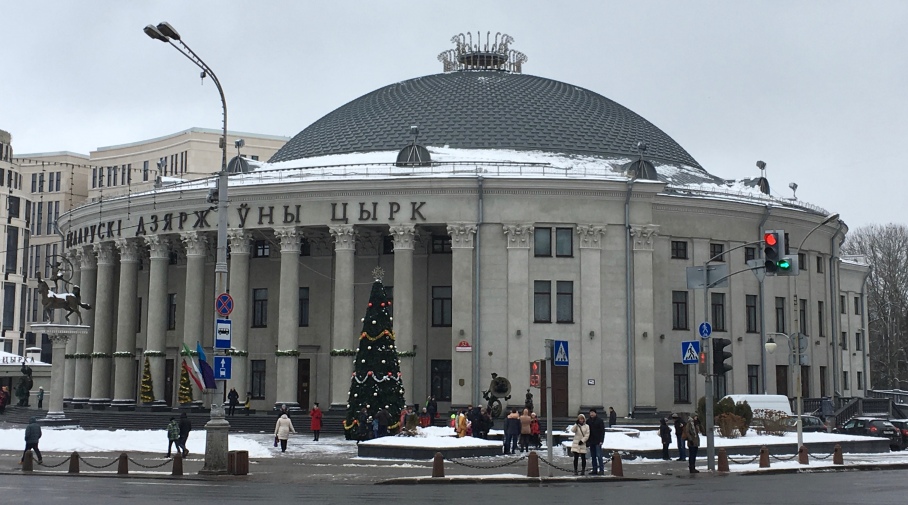 Finally I reached Victory Square, indicated by a tall column. 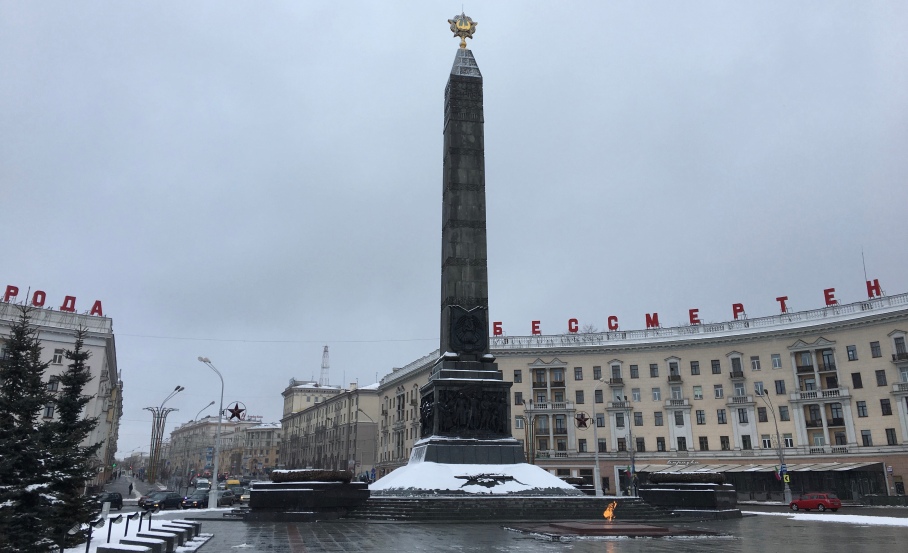 In the passageway beneath I found a memorial to the martyred soldiers.

From Victory Square I walked for an unexpected hour around the ‘first ring’ of Minsk to my hotel.

After making contact with my parents I ate lunch and worked on my blog. For the rest of the evening I tried desperately to stay awake, I picked up dinner from a nearby market before going to sleep at 11:00. 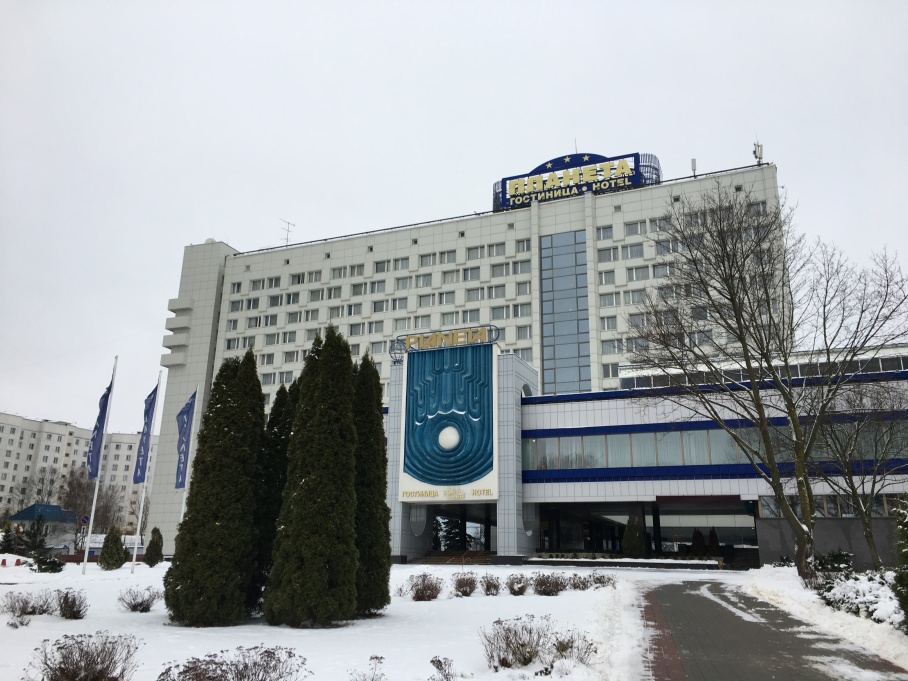