Rushed through breakfast to meet Rabbi Grisha in the hotel lobby at 9:00. With our driver, Pavel, we started our three day shtetl shlep through Belarus.

Our route fortuitously led us through Voloshin, home to the famed prototype of Litvak yeshivas. Rabbi Chaim Voloshin, the leading disciple of the Vilna Gaon, was eager to stop the tide of Hasidisim rising from the south. He left the epicenter of traditional Judaism in Vilnius for the battleground region of White Russia (Belarus). He chose to establish a yeshiva in the humble town of Voloshin, absent of attractions to distract students. His yeshiva, and the strict method of study it formulated, became the model for the yeshivas that spread through Belarus in the 19th century. Counted among alumni are Shimon Peres and Chaim Bialik. Students were provided food and board free of charge by the local Jewish community.

We continued our drive towards Vilnius until we arrived in the city of Lida. 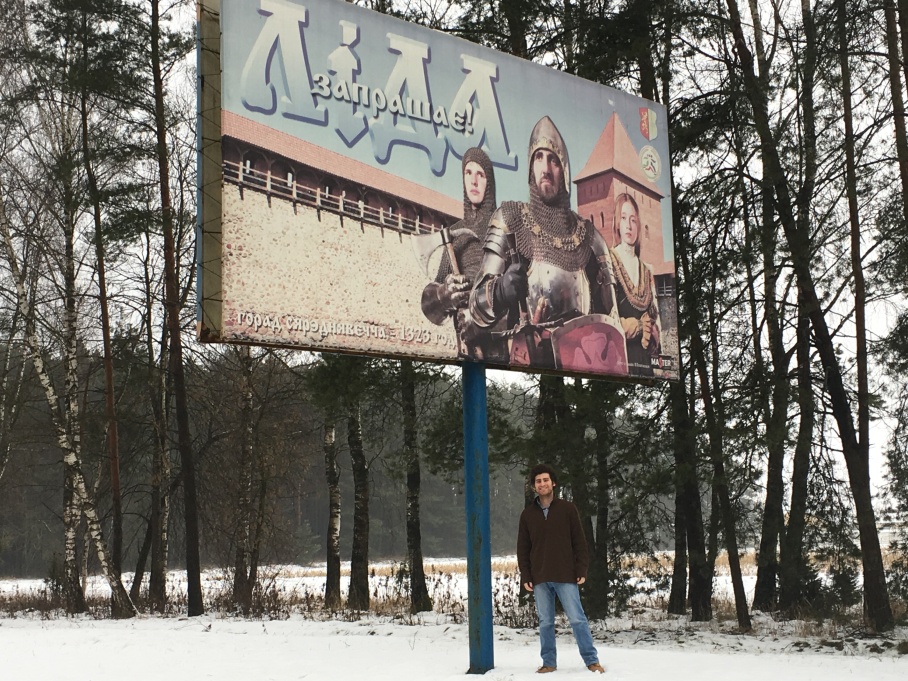 We started our tour at the Palace of Culture where we met Michael Dvilianski in the single room allotted to the Jewish community for services and functions.

In addition to serving as chair of the Progressive Jewish community of Lida, Michael is the founder and director of the local Klezmer group Shalom. Founded in 1993 to promote the previously suppressed Jewish community of Lida, Shalom has become the preeminent Klezmer band of Belarus. A recipient of funding from municipal and federal governments as well as from a bevy of Jewish foundations, Shalom has performed in ten different countries and at various state functions. They are the cultural pride of Lida.

It is appropriate that Jewish music should flourish in Lida as my papa’s grandmother, Ida Riches Lapidus (1873-1957), was both a native of Lida and matriarch of a very musical family. Another grandson was the pianist for Frank Sinatra. 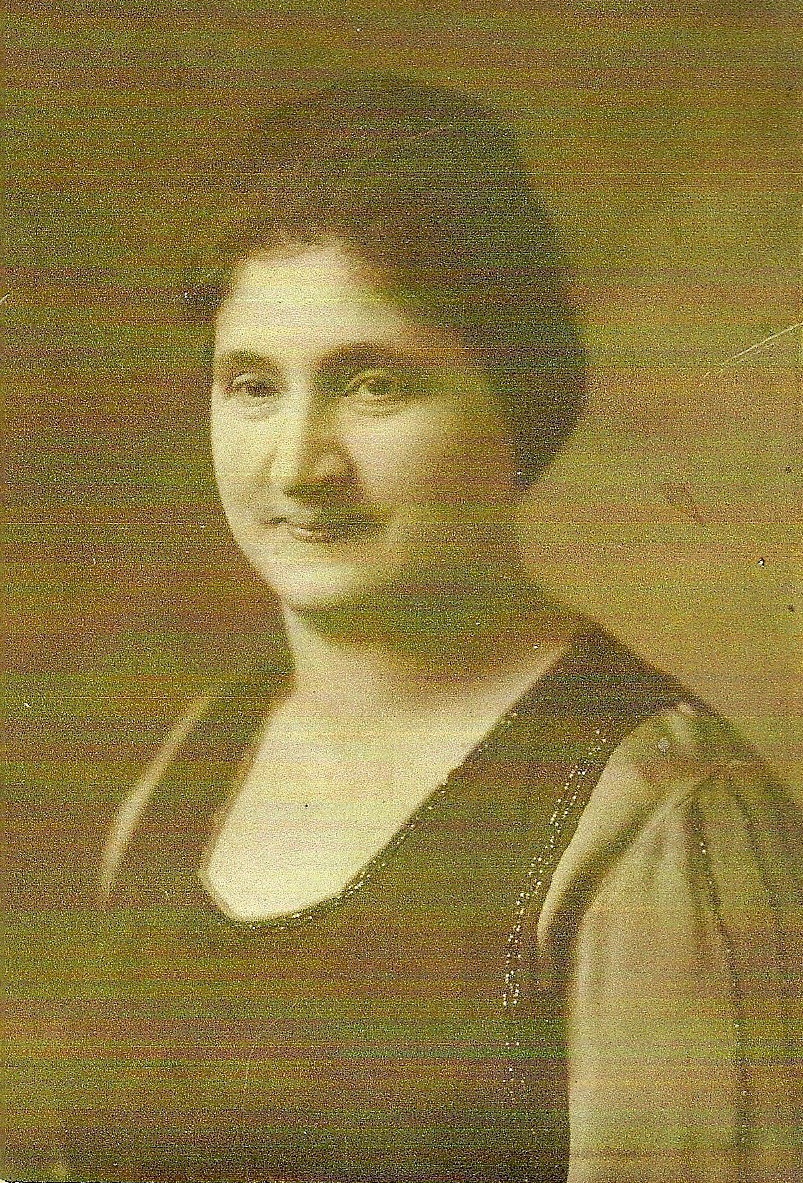 After bidding farewell to Michael we made our way to Lida Castle, constructed by Grand Duke Gediminas in 1323 to defend from Teutonic Knights.

A city grew around the castle, which changed hands many times over the centuries.

It was not heavily damaged until the city fire of 1891, but it was renovated in recent decades. Lida Castle was host to the 1422 wedding of Jogaila (King of Poland and Grand Duke of Lithuania) and Sophie of Halshany- parents of King Casimir IV and thus progenitors of the Jagellonian Dynasty. 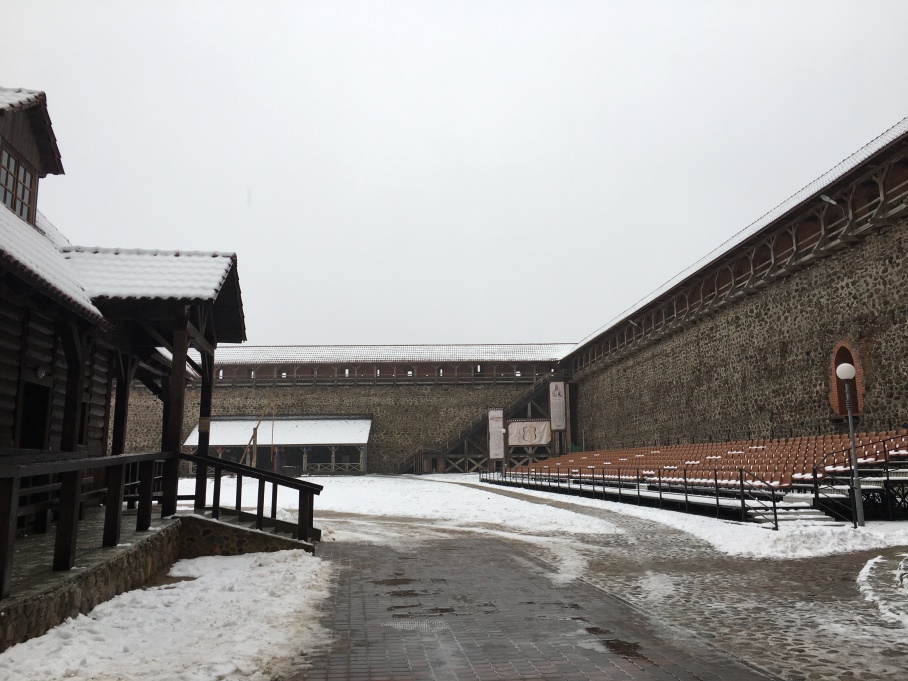 We met Andrei Fishbein, vice-chair of the secular-Jewish community of Lida,  just outside the castle at a quarter past one. Andrei indicated that in the city of 100,000 there are only 120 Jews, of whom half are active in Jewish affairs. He directed us to Lidskoe Pivo, one of the oldest and largest breweries in Belarus.

A staple at the table of Russian Tsars, Lidskoe Pivo was founded in 1876 by Nosel Pupko- a local Jew. Pupko and his family fled for Mexico after surviving the horrors of WWII, but his brewery continued to produce a variety of beverages. In 2009 it was acquired by the Finnish enterprise OLVI, and celebrated her 140 year anniversary earlier this year. It is also particularly appropriate that beer should flourish in Lida, as Ida Riches Lapidus was the matriarch of a family that loves beer and White Russians (translates to Belarus). 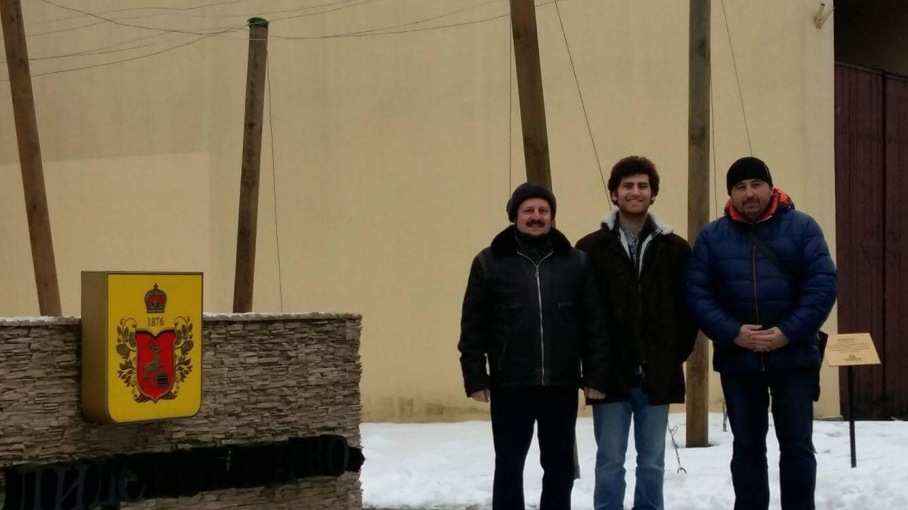 Across the street lied the cemetery established by Lida’s first Jews in the mid-16th century. Surely it was the resting place of my Riches ancestors. 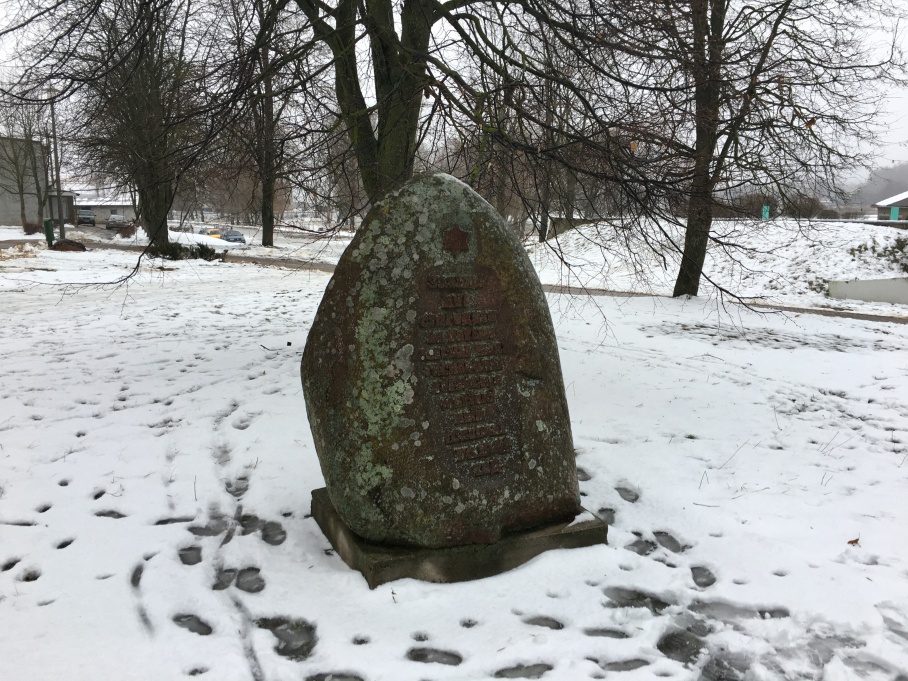 We then drove to the site of the Great Synagogue, built in the late-18th century. Despite her sizable pre-war community, which accounted for three quarters of the city, only the one synagogue stood in Lida. Massive in size, there was no need for another. Next door stood the famed Lida Yeshiva, established by Yitzhak Yaakov Reines (1839-1915) in 1905. While prominent across the empire, Reines was condemned by his colleagues for incorporating secular and Zionist studies into his curriculum. The Nazis forced local Jews to burn both to the ground. 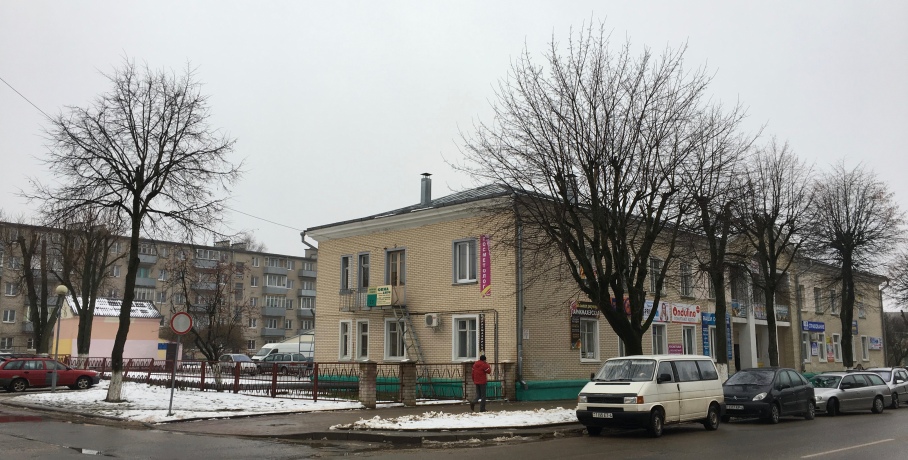 It was a short drive to forest where on May 8, 1942, Nazi collaborators drunkenly murdered 6700 Jews from the nearby ghetto, which housed 12,000 Jews from across the region. 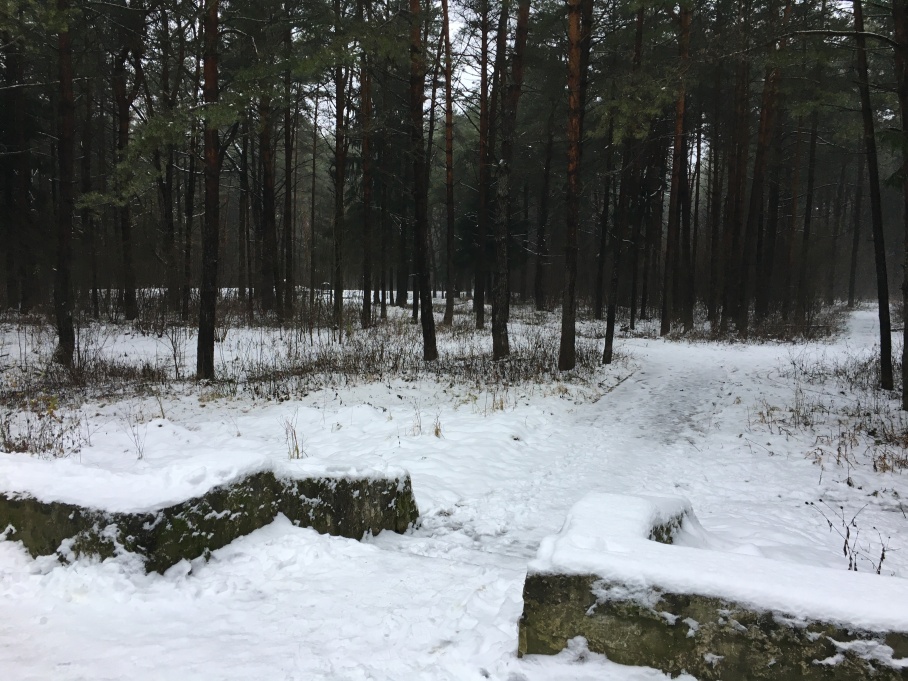 Victims were lined up along a ravine and shot in groups of 100. The pit was seven meters by thirty meters and three meters deep. A community event is held in memory of the victims on every anniversary. The first marker was erected in 1964, but not until last year were monuments added that indicate victims were Jewish. 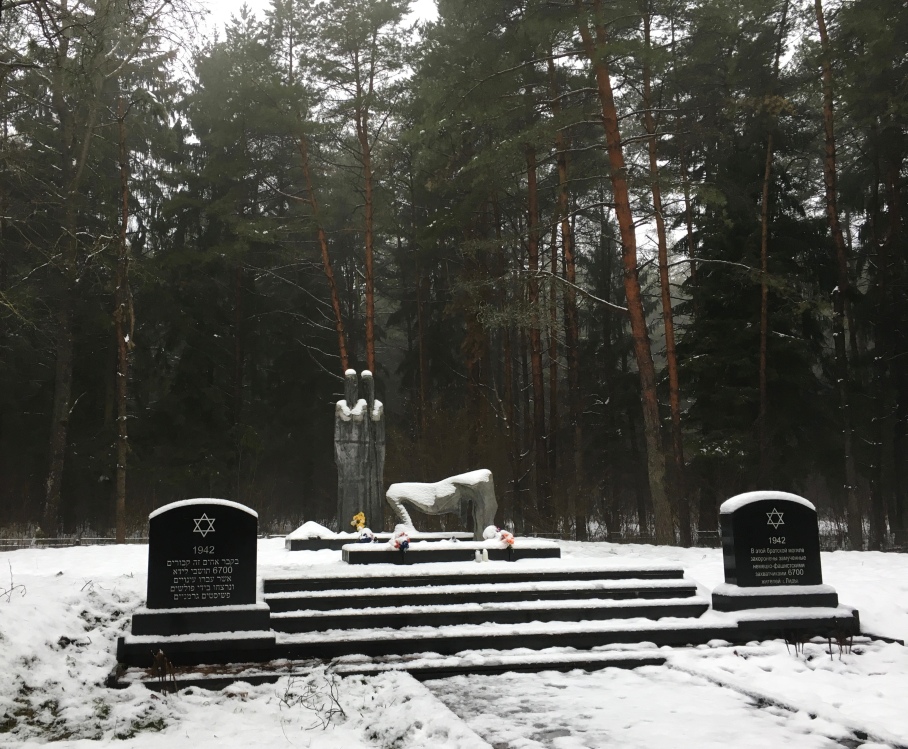 A nearby memorial marked the spot where the children, separated from their parents, were murdered on the same day. It was erected in 1972.

On the outskirts of the forest we found another mass grave, marked by tombstones that survived the destruction of the old Jewish cemetery. A memorial, consecrated by Rabbi Grisha in 2003, indicated that a substantial amount of Jews from Vilnius were deported to and murdered in Lida.

With that, we said goodbye to Andrei and continued our drive. En route we stopped in the ancient city of Navahrudak, which was home to one of the largest regional ghettos. 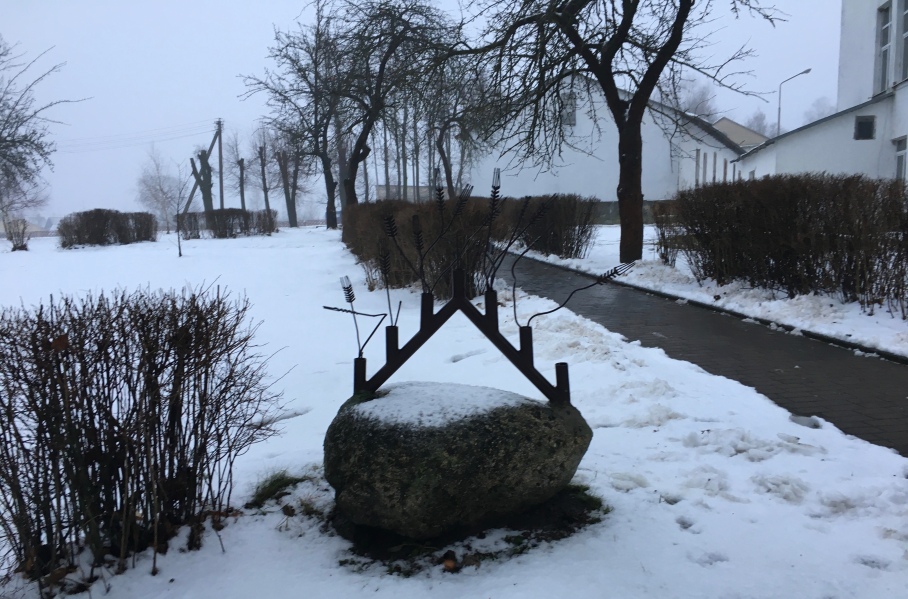 In 1943 hundreds of brave Jews dug a tunnel from the ghetto work camp to freedom.

Many managed to join the Bielski Parisan Brigade (made famous by the 2008 film Defiance), of which they made up a sizable proportion. One escapee was the grandmother of the son-in-law-elect, Jared Kushner.

It wasn’t far to Karelichy, where in 1869 Elias Davis was born. Family lore dictates that Elias changed his surname from Liss to Davidovsky so as to avoid the draft. He escaped using false immigration documents with his family to Birmingham, where they adopted the surname Davis.

Karelichy was beyond decimated during the war, and there are no remnants of Jewish life. We visited the site were I believe the stood a synagogue.

The municipal center of culture is accommodated by a pre-war building in the center of town.

It is surrounded by traditional prewar homes, perhaps the kind where my Davis ancestors lived. 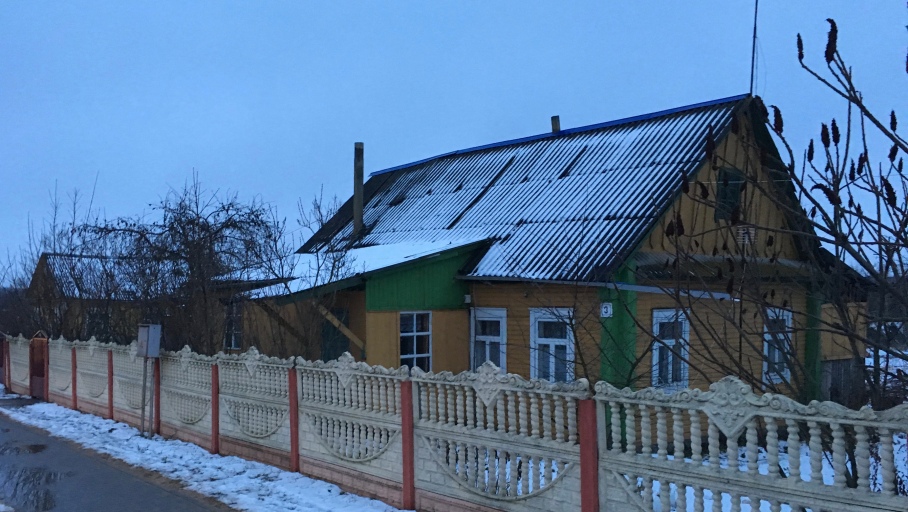 We continued on our route, along which we made a quick stop in the ancient city of Mir. I found Mir exceptional for her preservation of both secular and Jewish heritage sites of resounding importance. While Voloshin founded the ‘Litvak Yeshiva’, Mir perfected it. Founded in 1817, the Yeshiva flourished under the Kamai family of Rabbis. Unlike other Litvak Yeshivas that died with the six million, students and faculty from Mir were provided false visas from the Japanese diplomat Sugihara, which allowed them to make their way to Israel via Japan. The Mir Yeshiva flourishes to this day in Jerusalem and Brooklyn.

It was a short walk to Mir Castle, a UNESCO World Heritage Site and the pride of Belarus. Built in the early 16th century, the luxurious castle flourished under the ownership of the Radziwill family. It compensated for a lack of defensive topography by employing the most advanced weaponry. She was apparently flooded with lavish furnishings from across the continent.

We continued our drive and arrived in Baranovichi at 7:00. We were welcomed in the single-room Jewish center by an elderly crowd that had been eagerly awaiting the Rabbi’s arrival. The wedding began promptly. The bride and groom had been together for almost sixty years. They have children, grand children, and great-grand children residing in Israel. Jewish services (weddings included) were forbidden under Soviet rule, it was said that the last Jewish wedding in Baranovichi took place in 1930. I was kindly invited to assist in holding the chuppah and asked to make a few remarks.

I was even gifted a box of chocolates from the community and invited to join their modest feast. The meal ended with a round of jubilant traditional songs. Never before did I feel so connected to the shtetl. Ida Riches Lapidus’ sister, Bessie Riches, married Jacob Cohn of Baranovichi.