Took an early afternoon bus to Pylimo street in anticipation for the night’s events. Had Mexican for lunch.

Spent the next few hours at various cafes trying organize my shtetl stops. To be honest, I’ve had quite a bit of anxiety about planning my travels to perfection, and I think it has (ironically) kept me from making the most of my time thus far. Before arriving in Vilnius I had this dream of a semester spent with travels interspersed throughout, weeks spent organizing glorious weekends each dedicated to a specific ancestral town. I didn’t consider the necessity of specialized tour guides, their cost, or the cost of a rental (most towns are unreachable by train or bus). It looks like the most cost efficient route will be to hire a guide for three days, two shtetls a day, thus accomplishing the 6 Lithuanian shtetls (excluding Vilnius) in just one weekend. As Dad says, I can always go back. I should be able to accomplish the others shtetls (outside of Lithuania) via 1 trip to Poland, 2 trips to Belarus, and 1 stop in Ukraine on my way home.

Needless to say, this does not include the various trips that I intend to take to cities of general interest: Kaunas, Siauliai, Panevezys, Druskininkai, Kernave, Rumsiskis (Lithuania), Riga (Latvia), Tallin (Estonia), Warsaw, Bialystok, Lublin (Poland) etc. Fortunately, these excursions won’t require nearly the same amount of preparation, as they are all reachable by train or bus and do not necessitate a tour guide (just my handy-dandy guidebook).

Spoke to mom and grandparents before heading to the Rabbi’s home to celebrate his 29th birthday. I was invited by Amit, president of Lithuanian Union of Jewish Students. Rabbi Shimson Izakson arrived in Vilnius only a few months ago after a scandal resulting in the termination of Chief Rabbi Chaim Burshtein. Rabbi Izakson is a native of Belarus and attended Yeshiva in Israel. Along with Rabbi Krelin, also hired to fill the void left by Burshtein, Rabbi Izakson is one of three Rabbis in Vilnius- the other being a Chabadnik.

It was an extremely pleasant night. I met a bevy of Litvaks including multiple students and the enthusiastic Rabbi imparted wisdom. Food was provided, I was handed leftovers before departing, and I was even given a ride home. 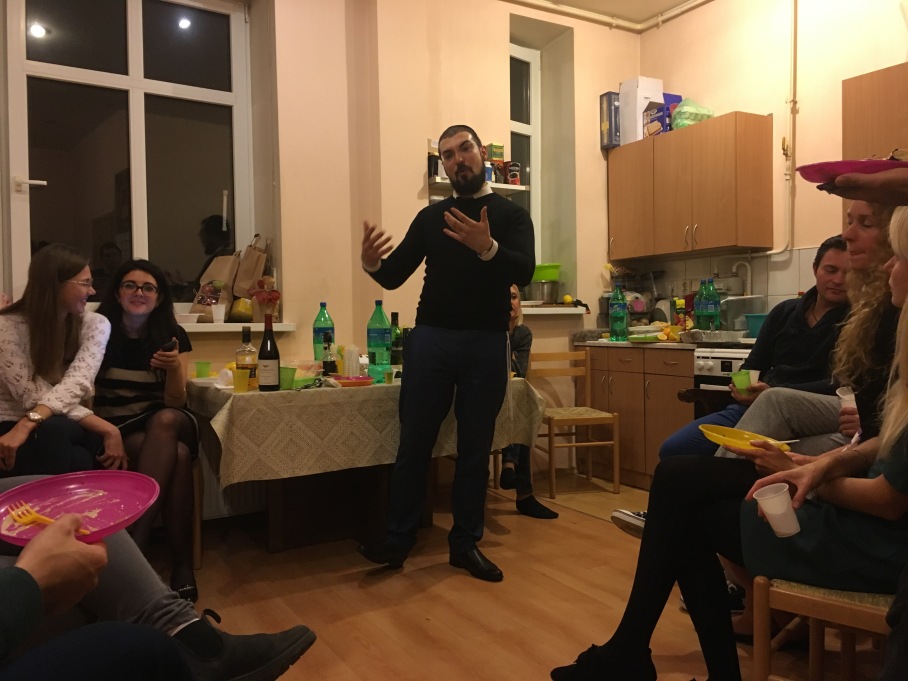