We started at the ‘Holocaust Exhibition’, an annex of the Vilna Gaon State Jewish Museum. Surely it was fascinating, but felt a bit more like walking into a book than a museum. There was an overwhelming amount of text and limited artifacts. 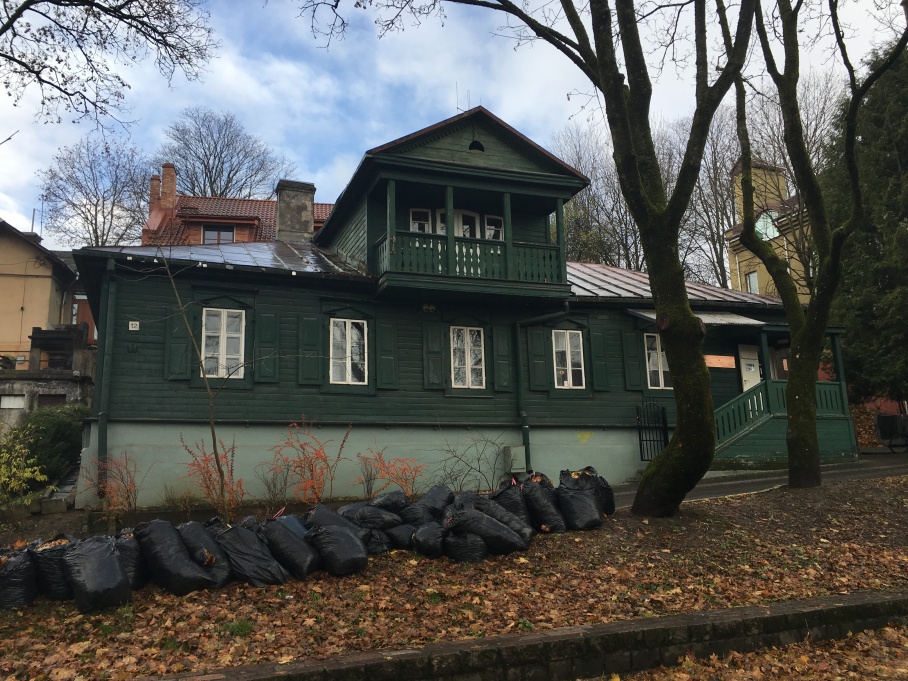 At the end of our tour we enjoyed a brief film set to diary entries of young Isaac Rudashevsky, a Vilnius resident who perished during the Holocaust. The family name sounded familiar… turns out he was a nephew of Rachel-Leah Rudashevsky nee Reiches who was a first-cousin to my great-great-grandmother, Ida Riches Lapidus.

We continued down Pylimo to the Bagel Shop in the Jewish Community Center (Pylimo 4) where I had previously led Shabbes. I had to show Dad how great their tuna bagels are.

Strayed a bit from Pylimo to the first home of YIVO, which was established in 1925 by the preeminent Yiddish scholars of the time (notably Max Weinreich) to preserve and promote Yiddish language and culture, which was thought by many to be endangered by the promotion of Hebrew language and culture among European Jewry. Headquarters were later moved to New York City where YIVO remains the preeminent Yiddish institution. Their Encyclopedia of Jews in Eastern Europe has been of utmost value in my research. I would not mind working there one day.

Ventured past Pylimo to the central building of the Vilna Gaon Jewish State Museum known as the ‘Museum of Tolerance’, dedicated to Lithuanian Jewish (Litvak) history and culture.

It was really well put together. The top floor housed a collection of traditional Litvak art. Perhaps most fascinating was an 18th century shield of the Ten Commandments that hung in the Great Synagogue during the time of the Vilna Gaon. 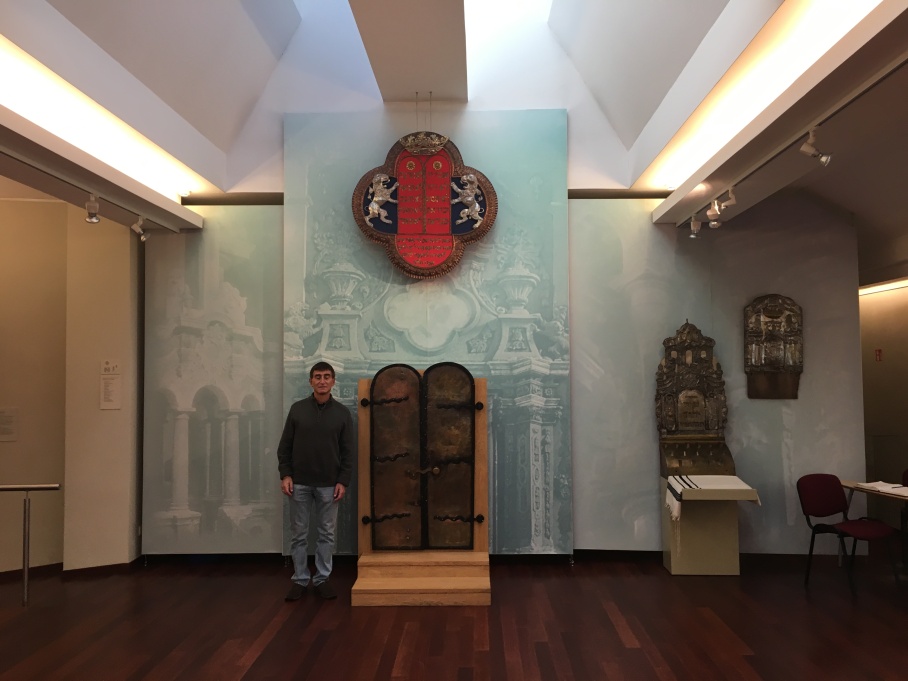 The second floor featured a temporary exhibit about Jewish children of Lithuania during the Holocaust. Isaac Rudashevsky’s story was one of many on display, also that of an ‘Ira Reiches’ who is presumably a relative.

The main floor provided a general overview of Jewish history in Lithuania, I look forward to spending more time there in the future.

Continued to the southern end of Old Town to find the only synagogue that survived the war out of the 100+ that stood prior. Built in 1903, the Choral Synagogue was used as a medical store by the Nazis.

It generally holds weekly services, but is currently undergoing repair.

Walked a short distance to the entrance of the Big Ghetto, arranged in 1941 to replace the recently liquidated Small Ghetto. It held at least 29,000 Jews until they were systematically massacred in the Paneriai Forest. 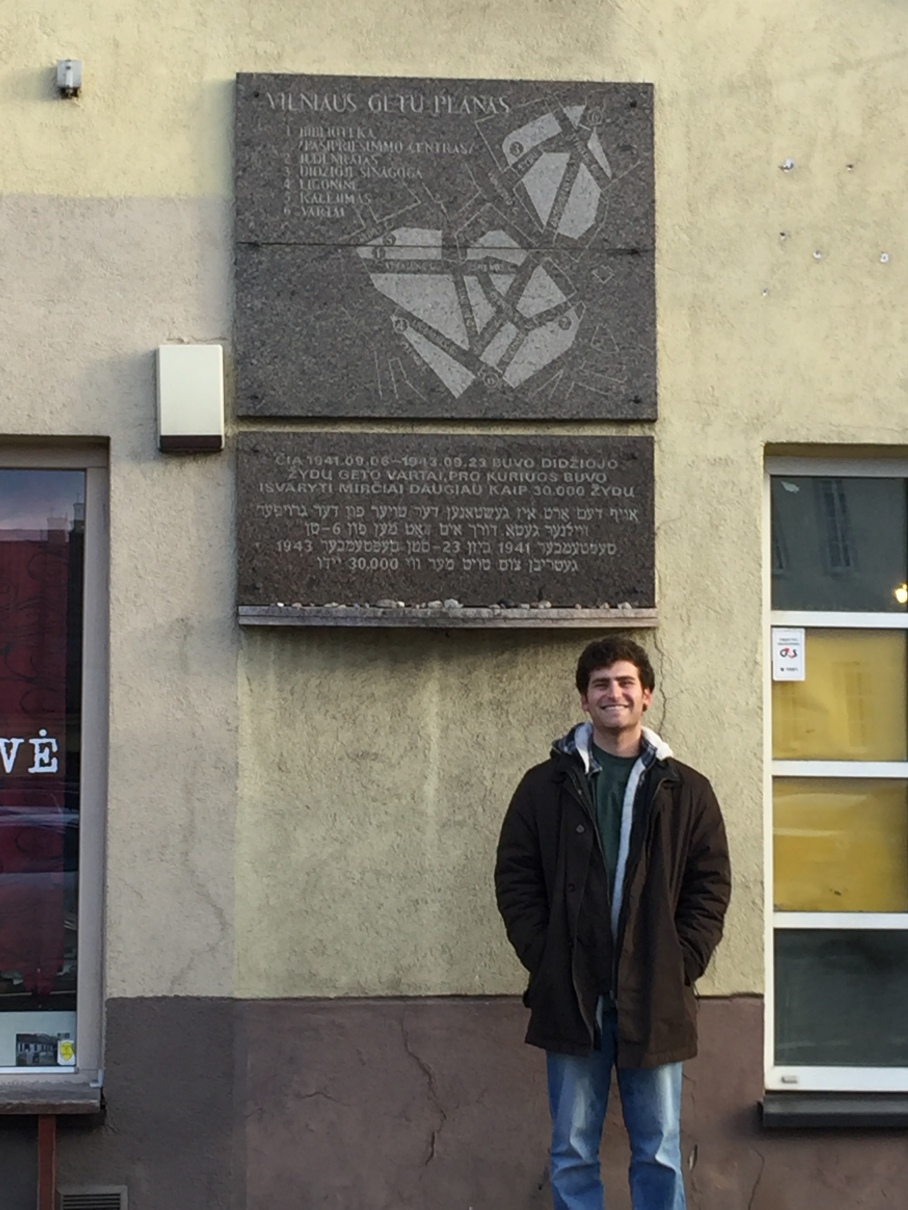 Within the bounds of the Big Ghetto lies the Jewish Cultural and Information Center where I’ve attended a variety of Jewish programs. 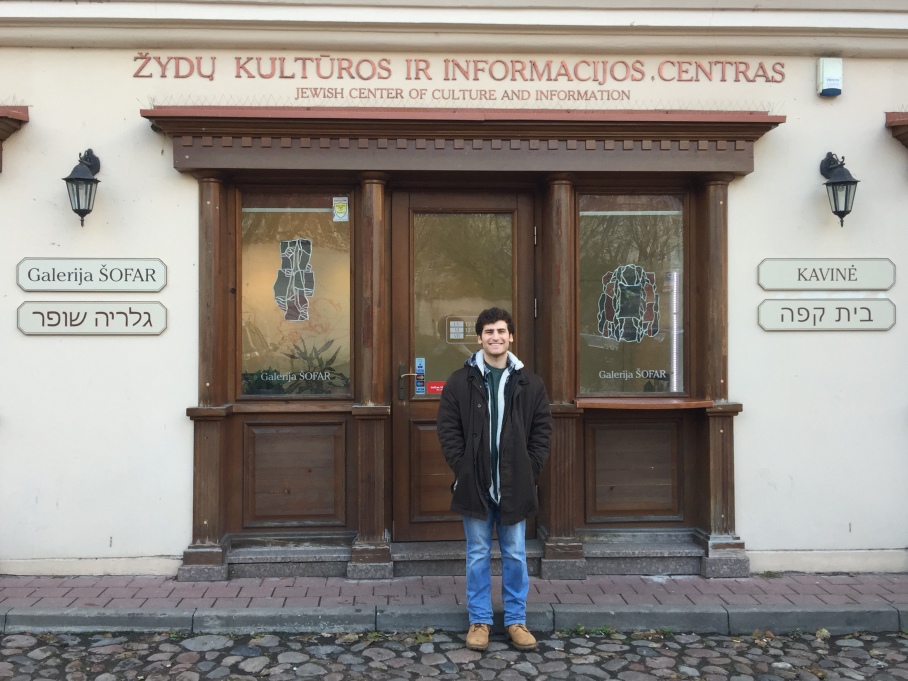 The Big Ghetto is separated from the Small Ghetto only by one street, which it turns is Vokiecu Street where I have my international relations courses on Mondays. Stopped by the building where my classes are held.

The small ghetto was located in the area where Jews had resided since medieval times. 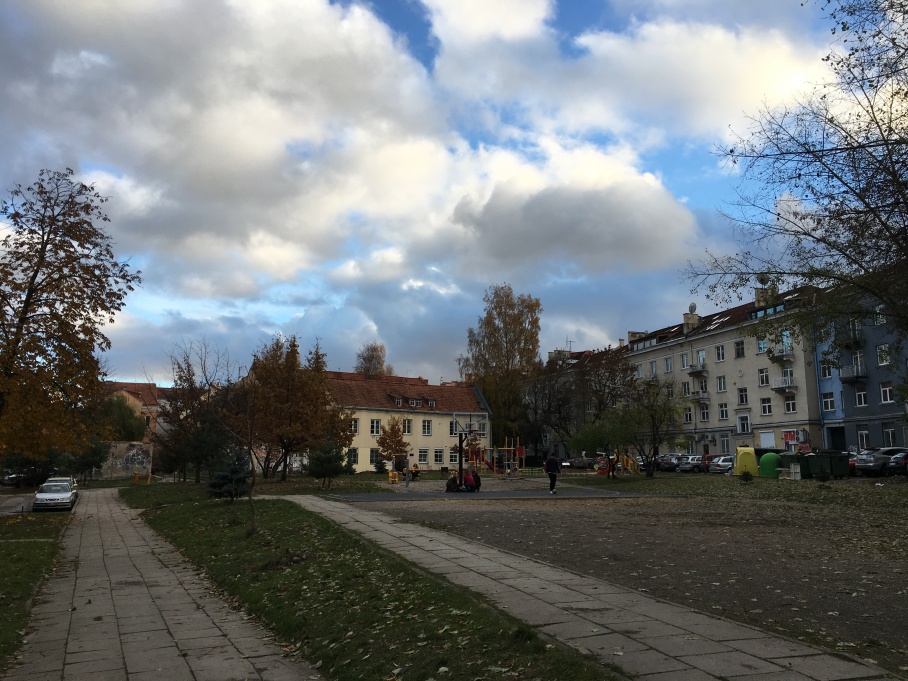 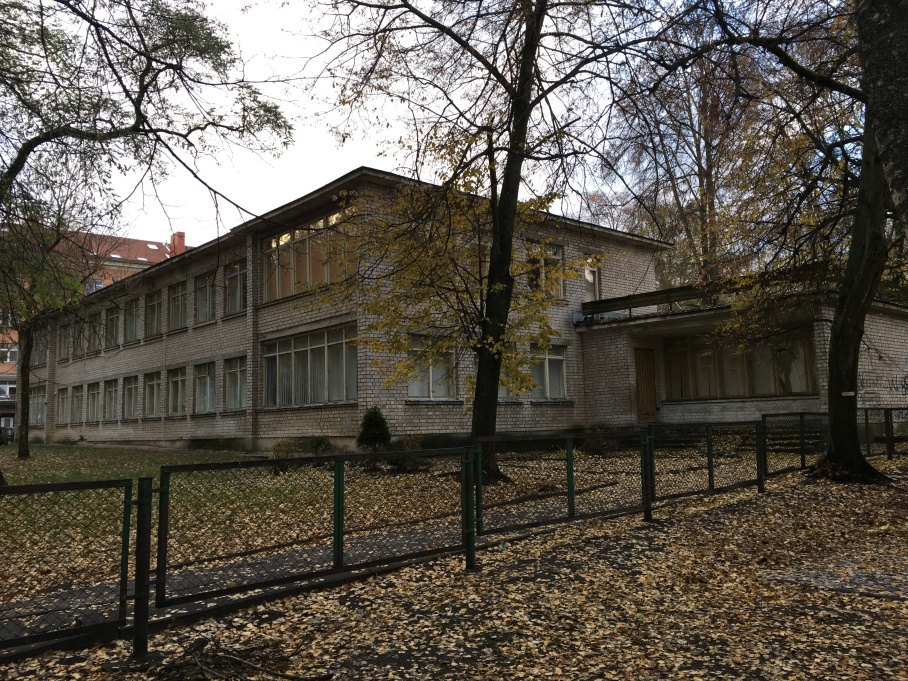 The Great Synagogue served as the epicenter of the Jewish community, which accounted for more than half the population of Vilnius in the early 20th century. Adjacent stands a monument of the legendary Vilna Gaon (1720-1797). The Gaon played no small part in developing the Litvak religious tradition, which can be defined essentially as a strict opposition to Hasidism. Litvak even became synonymous with ‘misnaged‘, meaning the opposition.

A plaque marks the building next door as his residence, but it is not universally accepted as such.

A newly adorned sign at the ghetto entrance labels the road as ‘Jewish Street’, first in Hebrew and then in distorted Yiddish, emblematic of the continuous usurpation of Yiddish language and culture by Hebrew language and culture (as promoted by the Israeli embassy here). 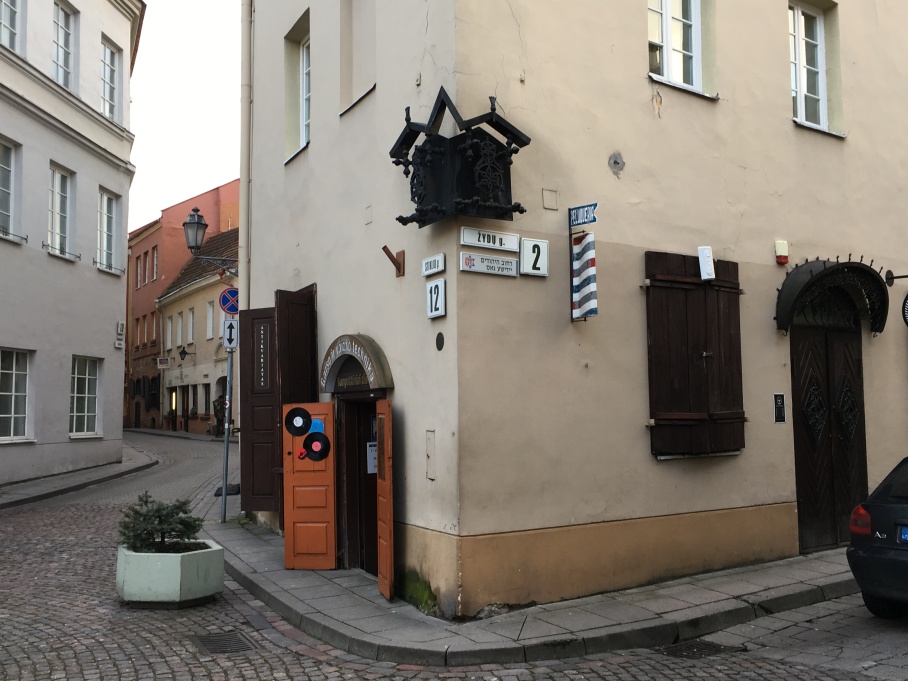 Afterwards, Dad and I walked back to the Jewish Community Center at Pylimo 4 for Shabbes. The service was conducted in Hebrew and the sermon entirely in Russian. Perhaps ten others joined us, we learned later that they were all paid to be there.

We walked down Jogaila back to our hotel on Gediminas where we warmed up and dressed up for dinner.

We met Amit and her boyfriend (Rokus) for dinner at 8:15.  They were kind enough to indulge our bombardment of questions about the Jewish community of Vilnius. It was a delightful and insightful evening, they are such great company.

Ubered back to the hotel where we didn’t fall asleep until past 1:00.