Warsaw gained prominence in the mid-16th century as an equidistant alternative to the constituent capitals of Vilnius and Krakow. As a result, Queen Bona Sforza built there a wooden estate- destroyed, but succeeded by a pantheon of royal residences. The site came to be known as Lazienki Park, the largest in all of Warsaw.

Started our tour there at 11:00. We spotted a couple of red-haired squirrels, unlike anything I’d ever seen.

The Kingdom of Poland regained sovereignty at the Congress of Vienna (1815) which sought to rebuild Europe after the fall of Napoleon. Alas, Poland was granted to her liberator, Tsar Alexander I of Russia, who appointed his younger brother (Grand Duke Constantine) to rule over it. A palace was built for him in 1819 atop the ruins of the Bona Sforza estate known as Belvedere. Constantine fled in 1830 as a result of the November Uprising, which eliminated any morsel of autonomy that Poland had left. Poland was effectively incorporated into the Russian Empire. 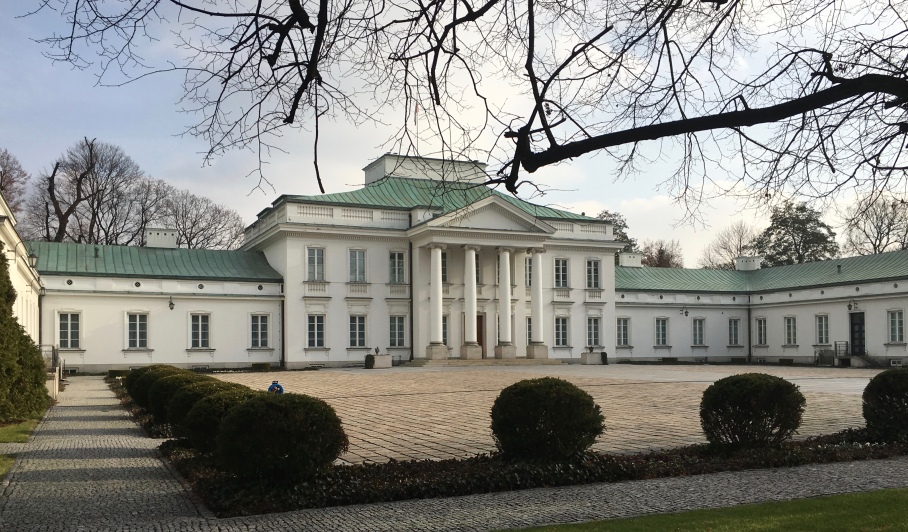 After WWI Belvedere became the residence of Marshal Jozef Pilsudski, who led the nation to independence and then ruled over it until his death in 1935. While beloved by Poles, Pilsudski is hated by Lithuanians for his occupation of their historic capital (Vilnius). His statue stands just outside the palace. 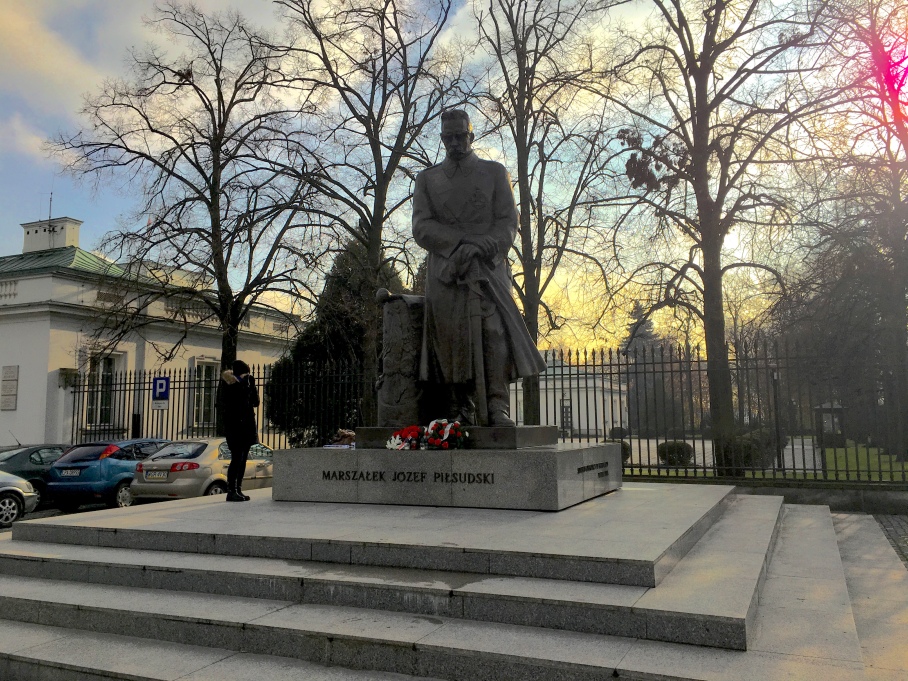 A statue of Warsaw’s favorite son stands not far behind.

Frederic Chopin was born during the French occupation and fled for France just before the November Uprising of 1830. He wrote mostly for solo piano, he became a leading symbol of romanticism.

A path worthy of royalty leads to the gem of the park, located at the heart of it. 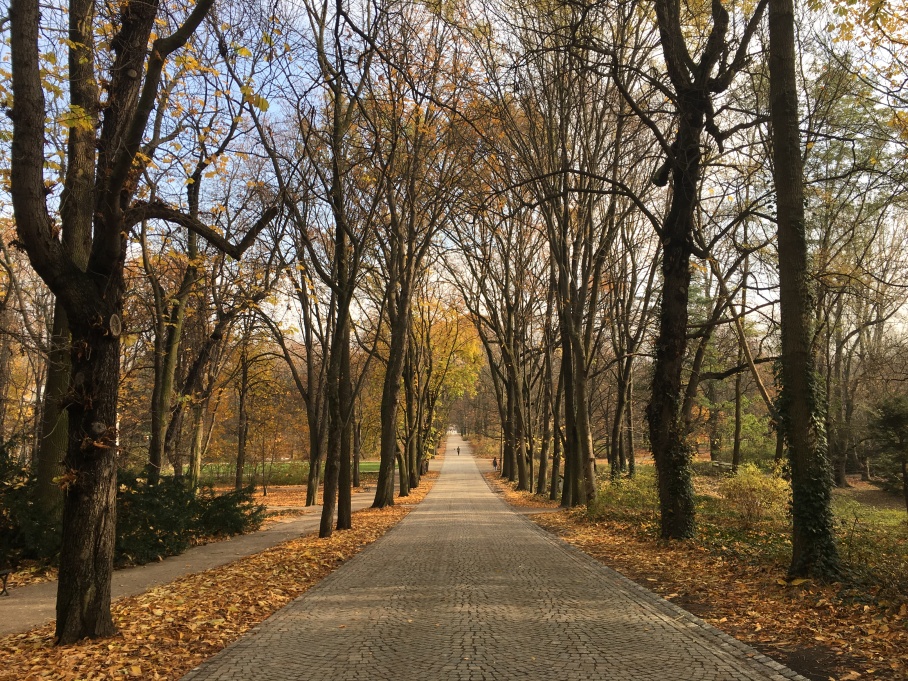 The Palace on the Isle was built by Grand Crown Marshal Stanislaw Lubomirski in the late 17th century as a bathhouse for his Ujazdow Castle. He dubbed it lazienki meaning ‘royal bath’. 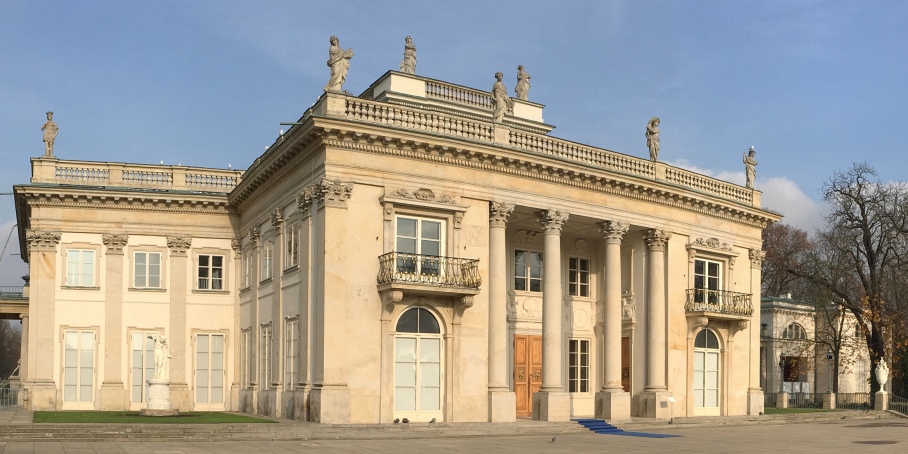 The castle was acquired in 1766 by the last King of Poland, Stanislaw II Augustus, who established his residence in the bathhouse, which he thought more lovely.

Classical in style and reasonable in size, it lies picturesque atop a still canal.

Her imposing and inferior predecessor stands up a long flight of stairs. The Ujazdow Castle was built for King Sigismund III Vasa who moved the royal seat from Krakow to Warsaw in the late 16th century following the Union of Lublin, which united Poland and Lithuania into a single state having previously functioned as a personal union.

After his death the Palace was purchased by Lubomirski who later leased it to King Augustus II Wettin, one of many to be elected monarch between the Vasa dynasty and the Partitions.

With that we taxied to Old Town, where we spent the latter half of our day. In his last will and testament of 1138, Duke Boleslaw III divided Poland into five constituent duchies for his four sons. The Seniorate Duchy was to always pass to the eldest duke, who would also reign supreme. Centuries of fragmentation followed instead. One duchy established was Masovia with her seat in Warsaw. Old Town grew around the royal castle.

We entered Old Town through a 16th century outpost known as a ‘barbican’, which once lied along the city walls. Along with the bulk of Old Town, the barbican was destroyed during the war and rebuilt afterwards. 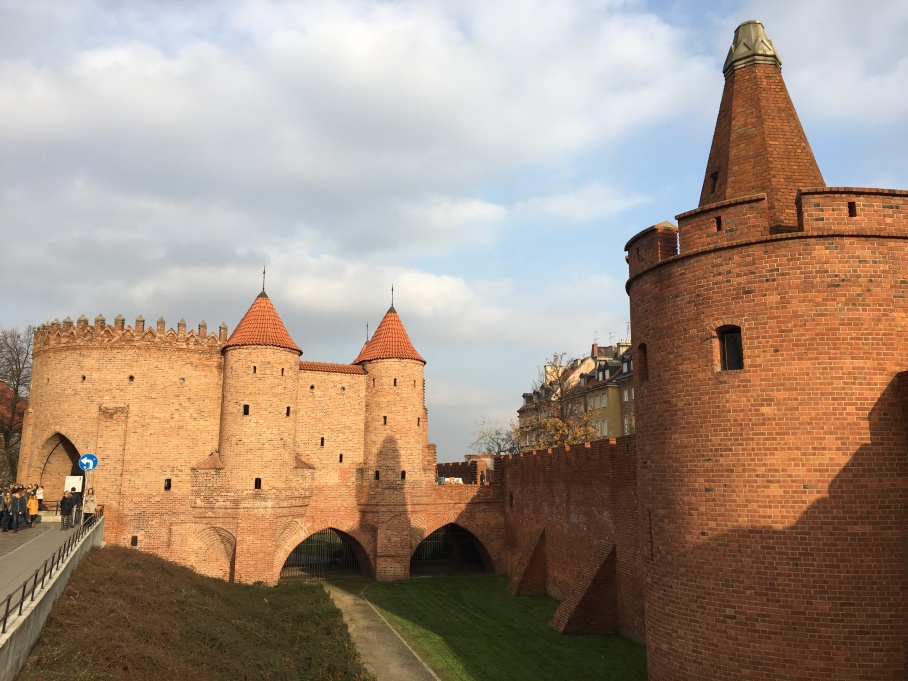 The Warsaw Uprising of 1944 was the single largest military effort taken by any European resistance movement during WWII- 200,000 civilians perished and 25% of Warsaw was destroyed. As retaliation, German troops leveled another 35% of Warsaw. Combined with earlier damage caused by the 1939 invasion, 85% of Warsaw was destroyed during the war… but you would never know it. Old Town was entirely rebuilt during the Soviet era based on sketches and using authentic materials.

It wasn’t far to market square, which dates to the founding of Warsaw. In the middle stands a 19th century statue of a sword-wielding mermaid, the symbol of Warsaw for centuries.

We had lunch along the square before walking to the Royal Castle. The complex was constructed for the Dukes of Masovia and later became the seat of the Polish-Lithuanian Sejm (parliament). It was one of the first buildings in Europe dedicated to parliamentary purposes. 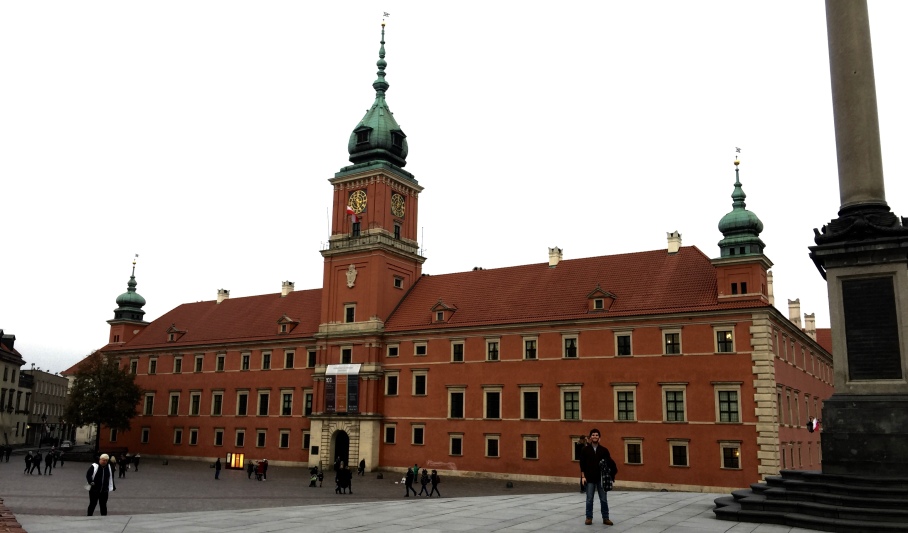 I was particularly impressed by the throne room, where the king met with his parliament. 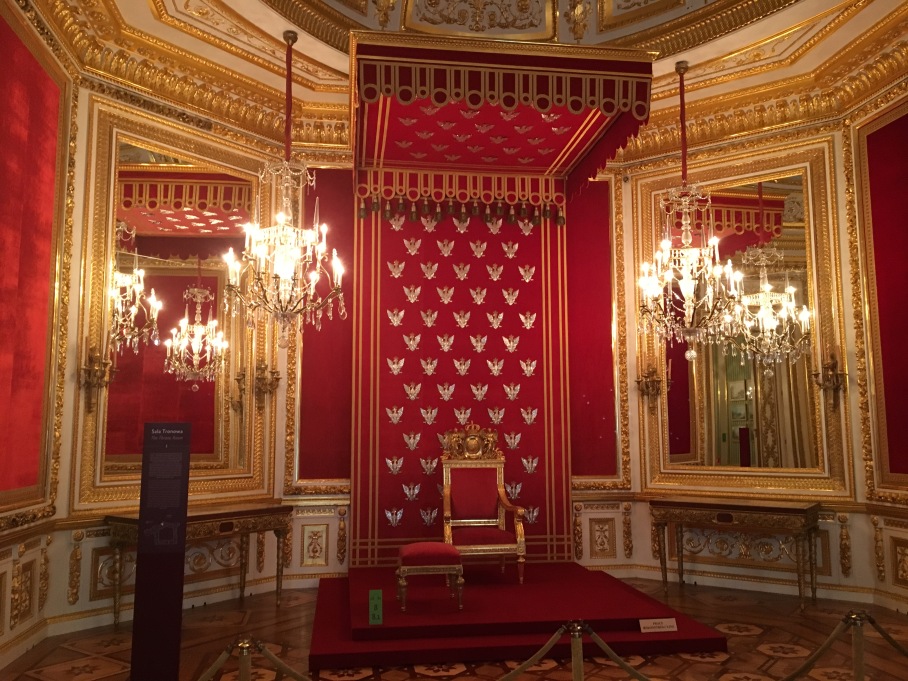 The royal bedroom was also spectacular.

The highlight was surely two Rembrandts that belonged to the last king, Stanislaw II Augustus. Interestingly enough, they were The Father of the Jewish Bride and The Jewish Bride. 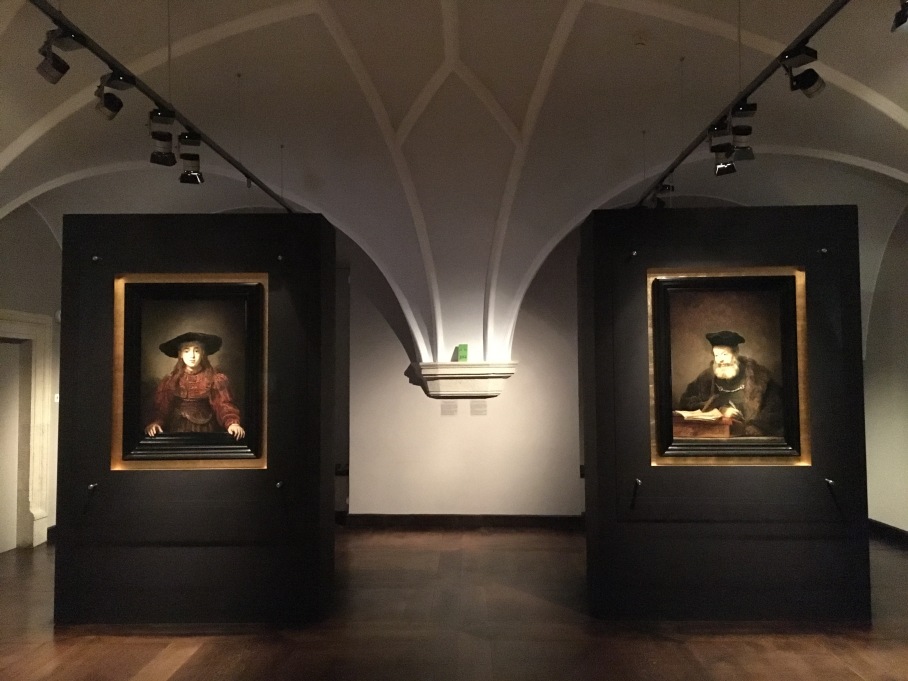 In the center of Castle Square stands the tall ‘Sigismund’s Column’, which was erected in 1644 to commemorate King Sigismund III Vasa who in 1596 moved the capital to Warsaw.

En route we found an impressive statue of Adam Mickiewicz, the national poet of Poland.

Nearby stands the Presidential Palace, built for nobility in the 17th century. During the interwar period it housed the Council of Ministers (leaders of parliament) and again after the war. Since the fall of the Soviet union it has served as the residence of the President of Poland, who commands the military and holds veto power over parliament. 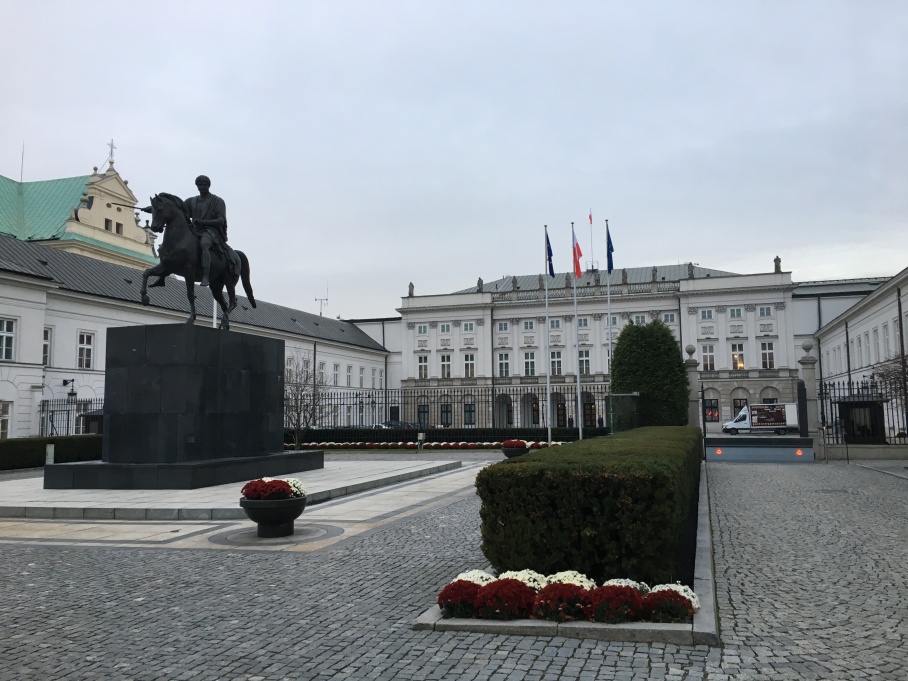 Just across the street we found a military ensemble preparing for tomorrow’s Independence Day celebrations.

Hitched a taxi to the hotel where we grabbed our bags before rushing to the station to catch our train at 5:00. All seats were sold, but we were offered standing tickets for an exorbitant price. We had no other choice. Quickly boarded the train, fortunately there was room to set our bags down to sit on. Blogged on my phone most of the way. 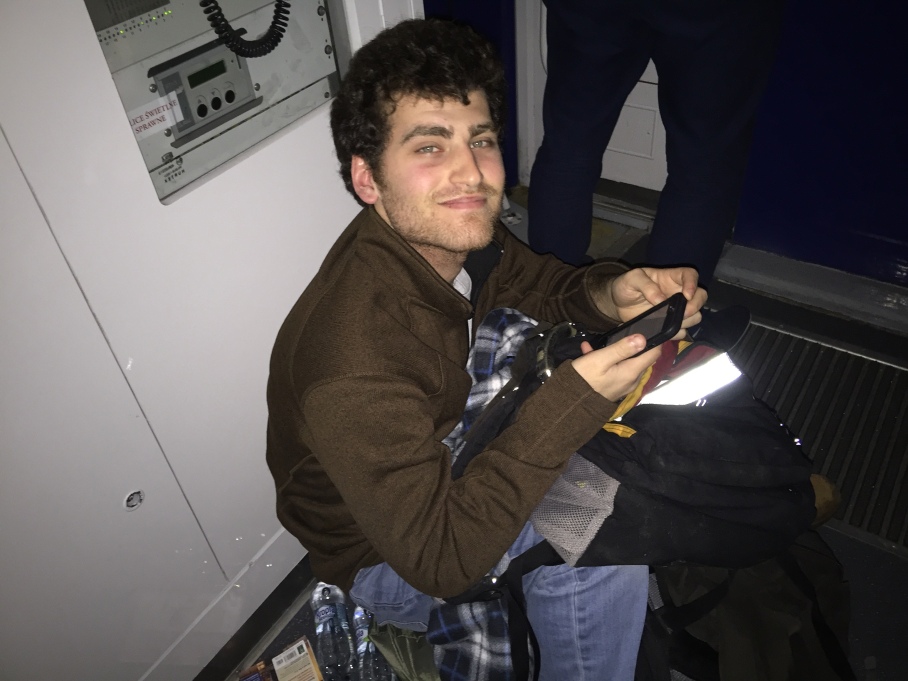 Arrived in Krakow pretty late. Upgraded to a nicer hotel per Dad’s request. Was too late to go out for dinner so we ate at the hotel. It was pretty good… Hotel restaurants seem to be the thing in Eastern Europe.