Went for a run before our bus picked us up from the hotel at 9:00. We watched a film about the liberation en route to Auschwitz. 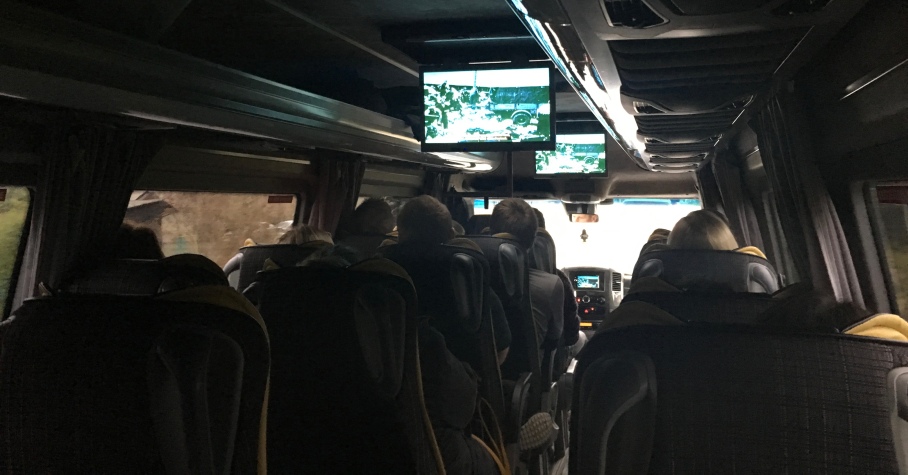 At 10:30 we arrived in the ancient town of Oswiecim, of which Auschwitz is the German derivative. Dad was angry that the town (independent of the camp) had the audacity to exist after the war.

Our guide was Emily, she couldn’t have been more than a few years older than me. I was blown away by her sensitivity, eloquence and knowledge.

We started our tour at the famed ‘Arbeit Macht Frei’ sign, under which prisoners of ‘Auschwitz I’ passed each day on their way to and from labor assignments. The earliest prisoners of Auschwitz were Polish soldiers and academics, interred following the invasion of 1939. 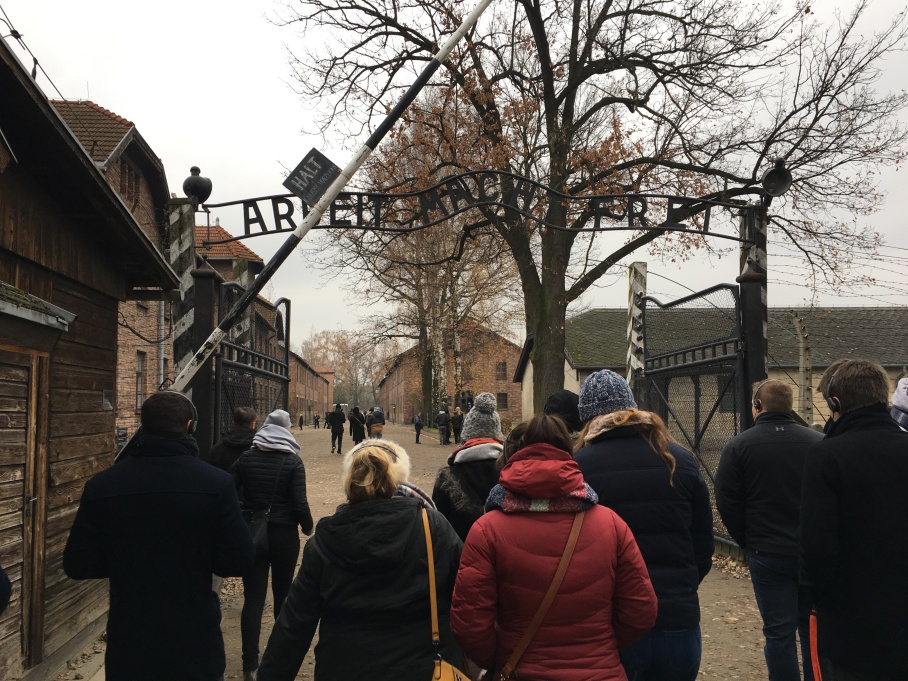 The infrastructure had previously been used as barracks by Polish and Austrian armies. 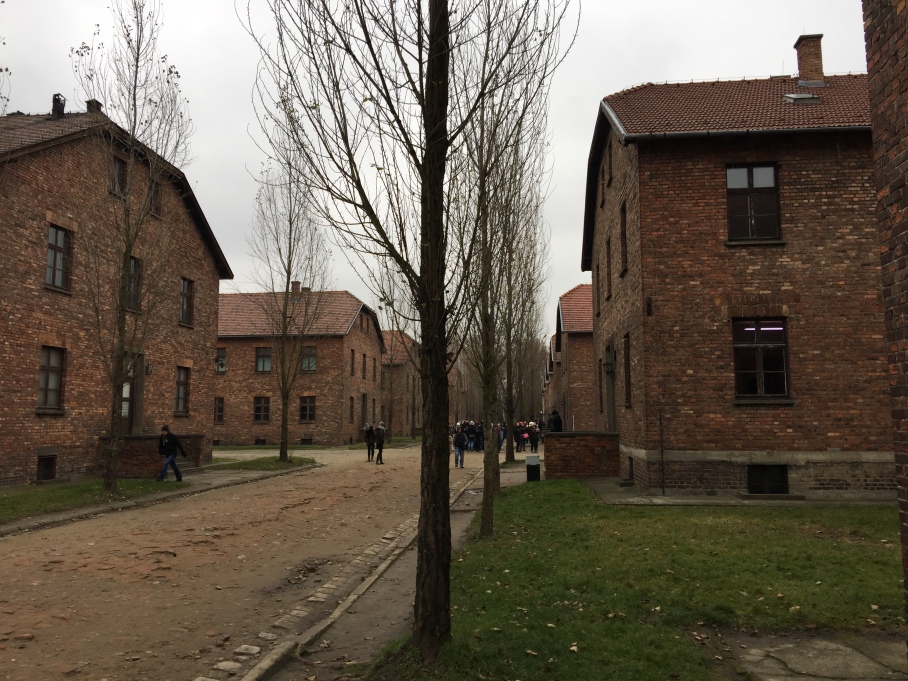 The first building we entered functioned as a museum. It provided a chronological overview of the complex as well as an overview of the prisoner experience from transport to death. We walked through rooms filled with confiscated shoes, suitcases, silverware, but surely the most powerful was a two ton mound of curly brown human hair. 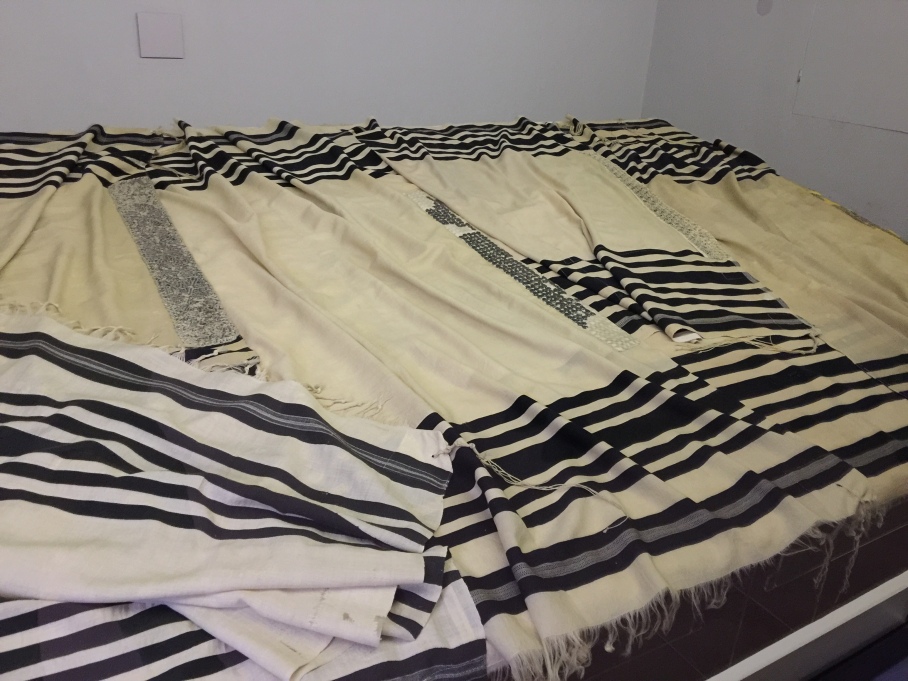 We visited the various rooms in Block 11 where political prisoners were subject to different methods of torture. It was the first place where attempts were made to kill humans with Zyklon B, previously used to exterminate insects. 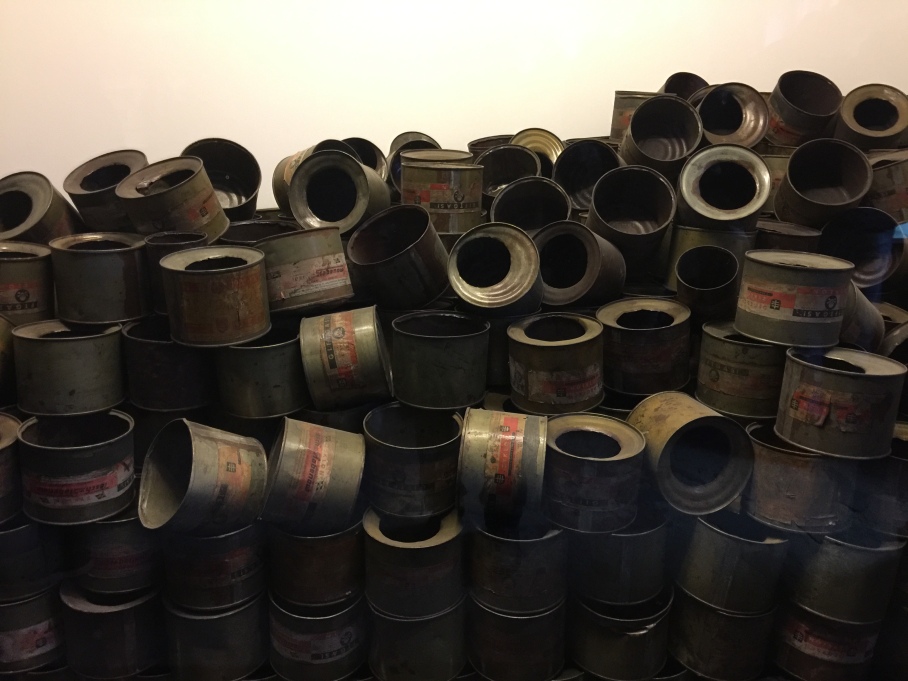 Out back stands a reconstruction of the wall where thousands of prisoners were executed by firing squad.

As we walked past the electrified fence where thousands threw themselves to death, we learned about the various medical experiments conducted on prisoners. Women were administered painful injections in order to develop methods for mass sterilization. Dr. Josef Mengele had a particular fascination with young sets of twins and triplets, on whom he performed torturous experiments that overwhelmingly resulted in death.

As we continued our walk we were told the story of Maximilian Kolbe. Camp rules dictated that if a prisoner escaped, ten men from his bunker were to be chosen at random to be executed in his stead. During one such occurrence, a young man chosen begged for his life- he had a wife and many children that needed his support. Father Kolbe offered to go in his place, as he was old and had no children. The guards agreed- Kolbe died in Block 11 and was canonized by Pope John Paul II in 1982.  The young man survived the war and lived for fifty more years. 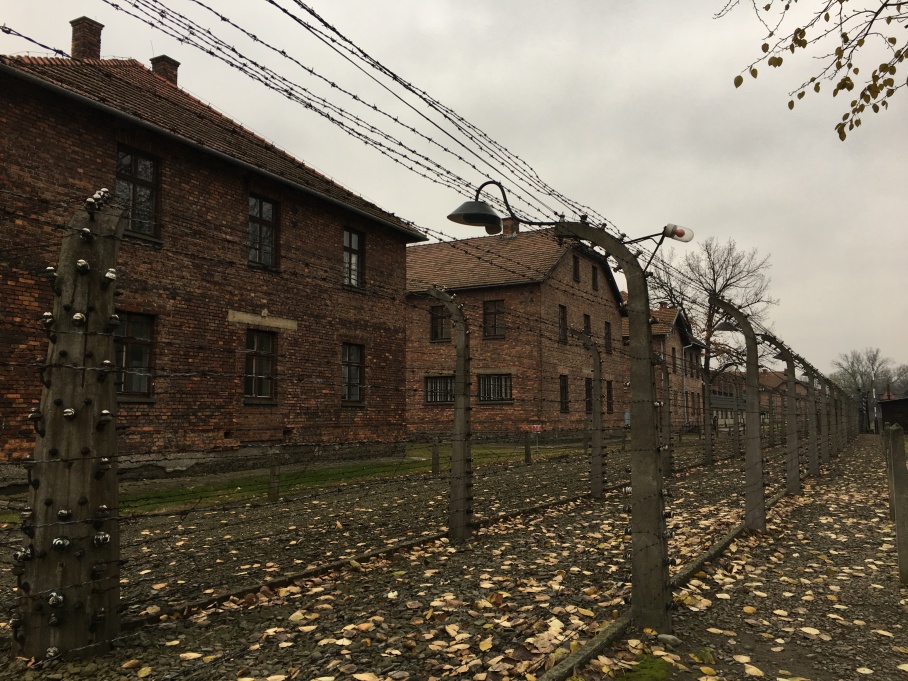 As we exited the prison our guide pointed out the residence of camp commandant Rudolf Hoss who oversaw daily operations. Hoss’ wife was reportedly distraught when her husband was promoted to work in Berlin- she loved her residence. 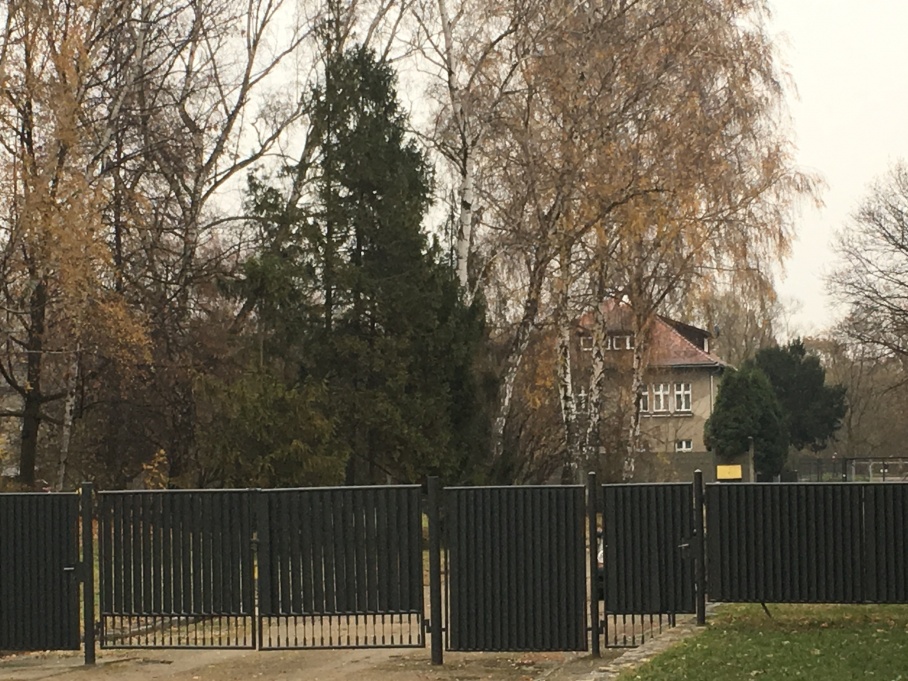 Adjacent stood a replica of the gallows where Hoss was hung in 1947 following his conviction at the Nuremberg Trials. 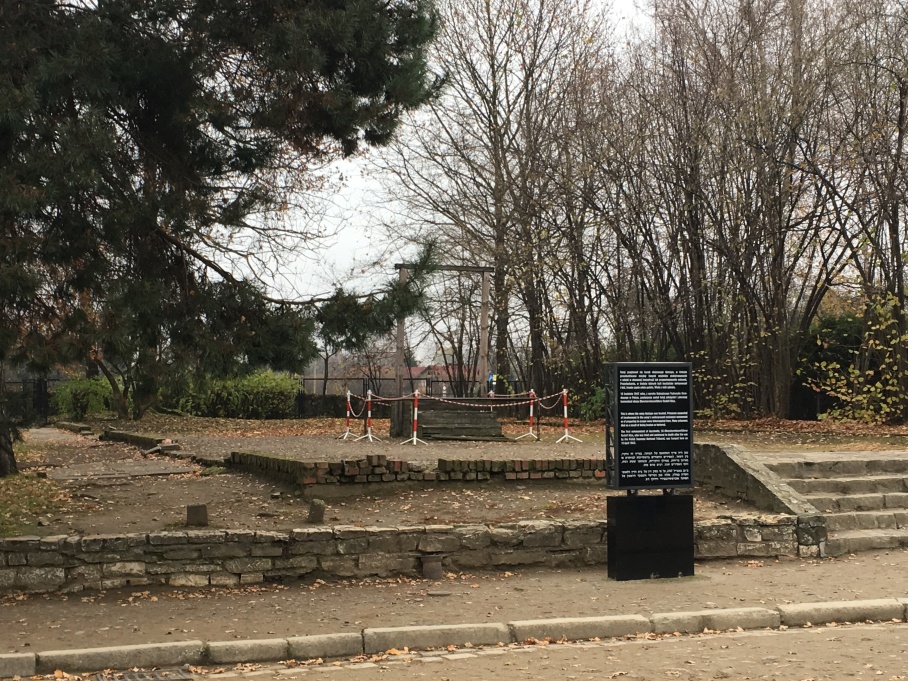 Nearby stood the only intact gas chamber from the entire Auschwitz complex. Its capacity was significantly less than those at Auschwitz II (Birkenau). It could only kill 700 people at a time. Our guide waited outside as we walked through in silence.

With that, we boarded the bus for the short drive to Auschwitz II, otherwise known as Birkenau. It was built a year after Auschwitz in order to accommodate for the rapid influx or Jews from across the continent, resulting from Hitler’s ‘Final Solution’. Whereas Auschwitz I held about 30,000 prisoners, Birkenau had a capacity of 100,000.

The first Jews were deported to Auschwitz in overcrowded cattle cars from liquidated ghettos in 1942.

Their fate was determined with a flick of a finger immediately upon arrival: those healthy enough to work were directed to the barracks, while young children, many women, most elderly, and all handicapped were directed to the gas chamber. It is estimated that around 75% of inmates were sorted into the latter line.

The tracks were the last place most inmates saw their loved ones. I couldn’t help but think about my thirteen year old sister, as I had throughout the day. 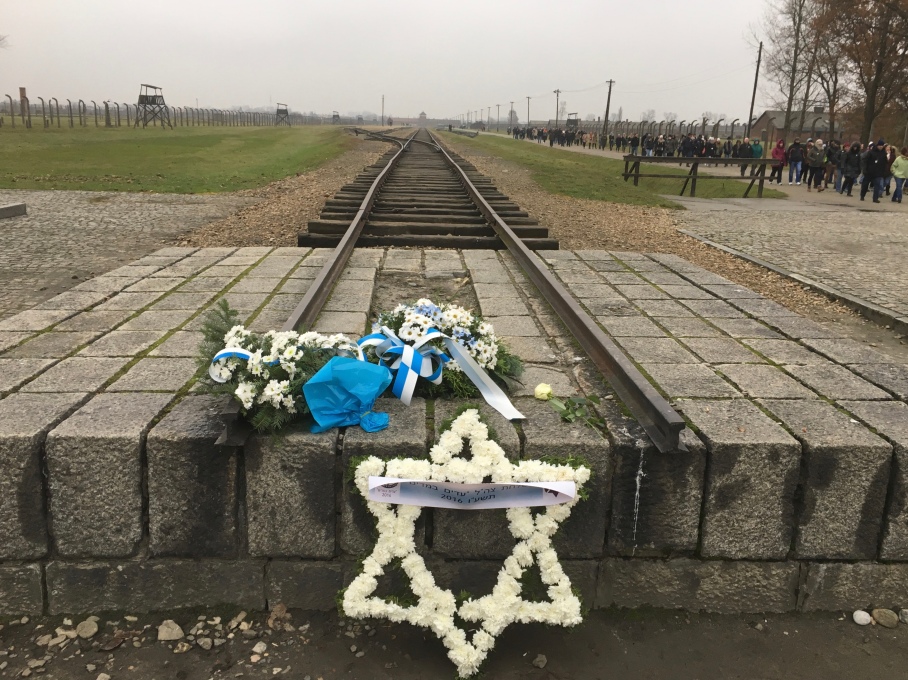 The vast majority of barracks were destroyed as the Nazis fled so as to conceal their crimes. On one side of the tracks, there were rows of brick chimneys as far as the eye can see.

A memorial to the victims stands just beyond the end of the tracks.

Plaques relaying the horrors in various languages lied in front. 1,300,000 people were deported to Auschwitz, including 1,100,000 Jews. Over a sixth of all Jews murdered in the Holocaust perished at Auschwitz.

Nearby rested the ruins of one of four gas chambers. Each had the capacity to kill 2,000 people at a time. At one end stood the room where men, women and children were forced to undress in the presence of one another.

They were then shoved into the adjacent dark chamber, where they were told to expect a shower before internment. Zyklon B (hydrogen cyanide) pellets were dropped from above. The death was excruciating and often lasted fifteen minutes. 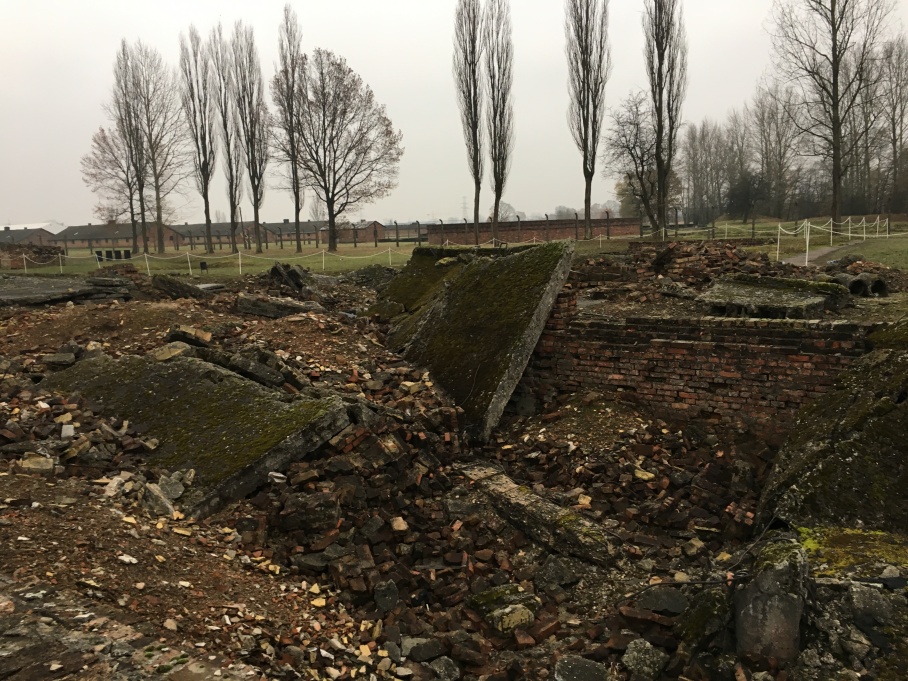 Their bodies were then dragged next door to the crematorium. With that, the millennium of European Jewry that I’ve spent the past few months exploring came to an abrupt end. 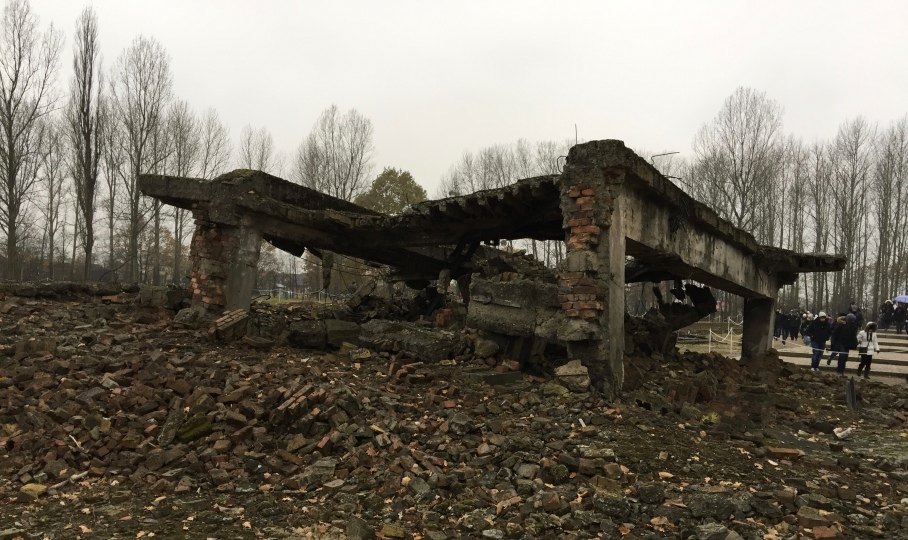 We then walked the length of the tracks, lined with barracks, to reach one we could enter.

Each barrack held over 700 people. 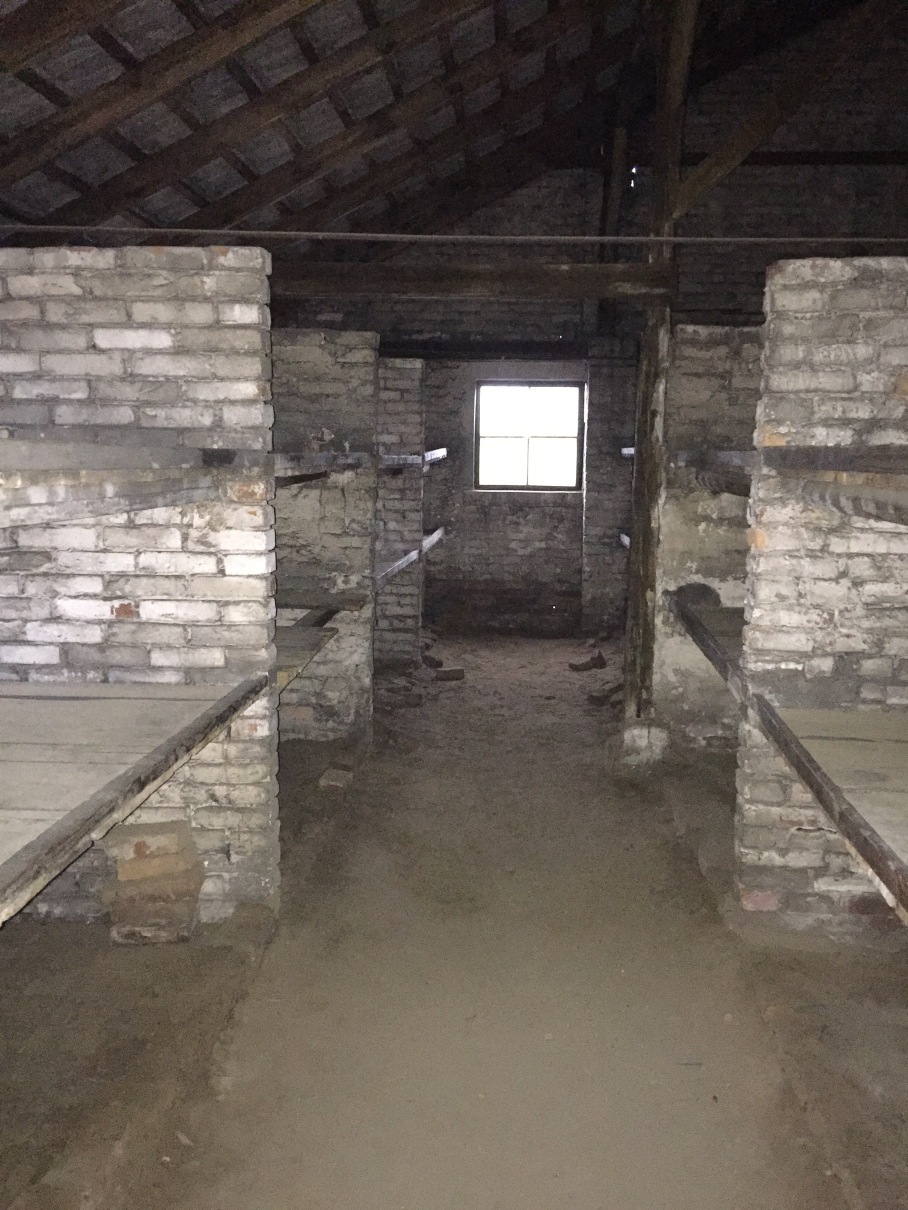 Each bunk had three levels, the top two were wooden and the bottom was the floor- hardened earth that turned to mud with moisture.

As we stood in the barracks our guide left us with the words of renowned writer and Auschwitz survivor, Primo Levi:

From whatever country you

look at the ruins of the camp.

Think, and do all you can,

be not in vain,

as was not in vain our death…

For you and your children,

the ashes of Auschwitz are

Act so that the terrible fruit

whose traces are visible here,

will never grow again a seed

neither tomorrow, nor ever!

I couldn’t help but think of that seed of hatred growing in America.

With that we loaded the bus back to Krakow. I don’t believe anyone who claims to fully grasp the magnitude of the horror. It was unbearable putting what I witnessed in the context my family alone. I surely don’t believe anyone who lacks a decent understanding of the culture, history and everyday life stolen from those massacred and wiped from our collective memory.

We took a taxi to the other side of Kazimierz, the suburb of Podgorze. We visited the enamelware factory of Oskar Schindler, which now houses an exhibition of Nazi-occupied Krakow.

In March of 1941 all Jews were evicted from Krakow to Podgorze, and in April walls were built around the city. It was one of five major metropolitan ghettos in Nazi Poland. The exhibition relayed the horrors of life in the ghetto.

Only a tiny portion of the exhibit was dedicated to Schindler, who saved the lives of 1200 of Jews by employing them in his factory. 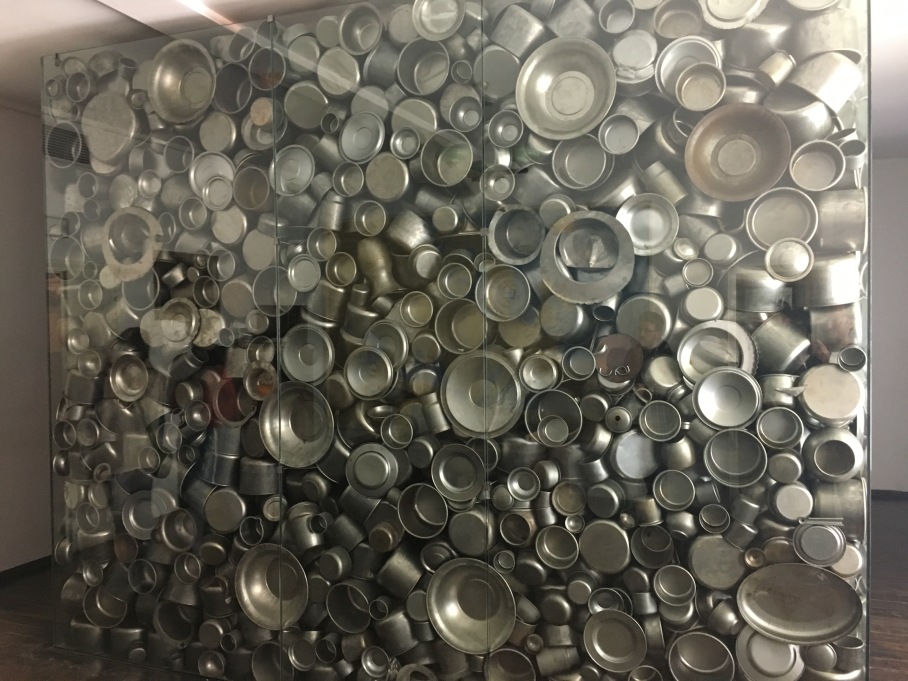 Their descendants now number almost 9,000. His efforts were immortalized in the 1993 Steven Spielberg film. 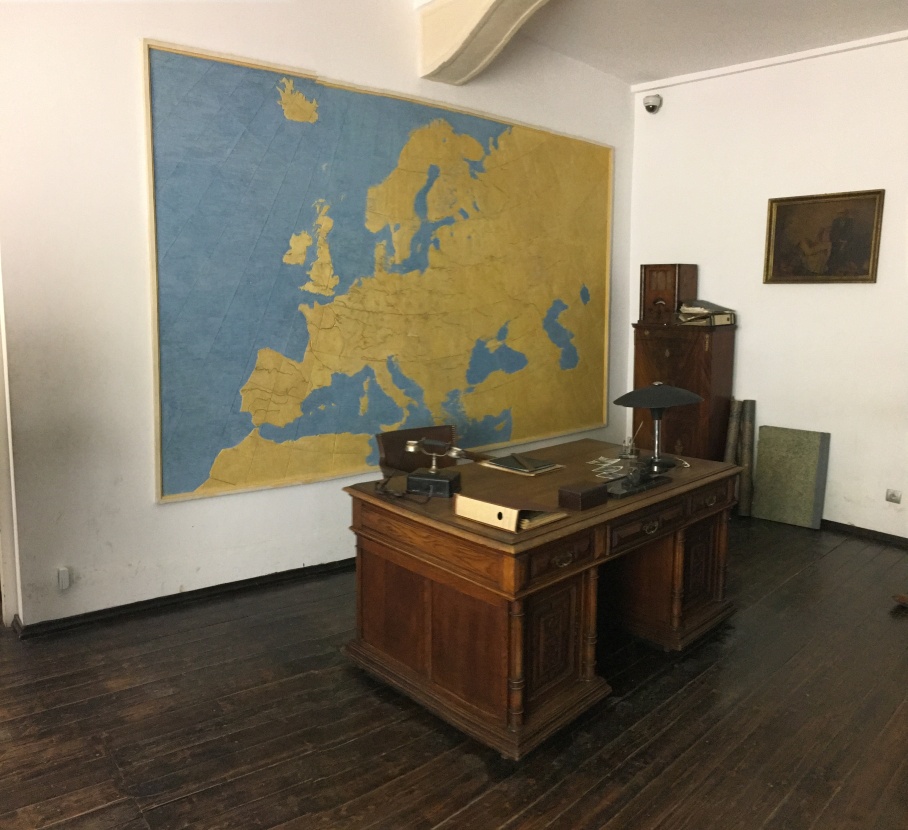 Afterwards, we taxied to Szeroka Square where snow had accumulated. We noshed on gefilte fish and matzoh-ball soup at ‘Ariel’ before our reservation at 7:30.

We had dinner at Klezmer Hois, which is housed in the former mikveh. 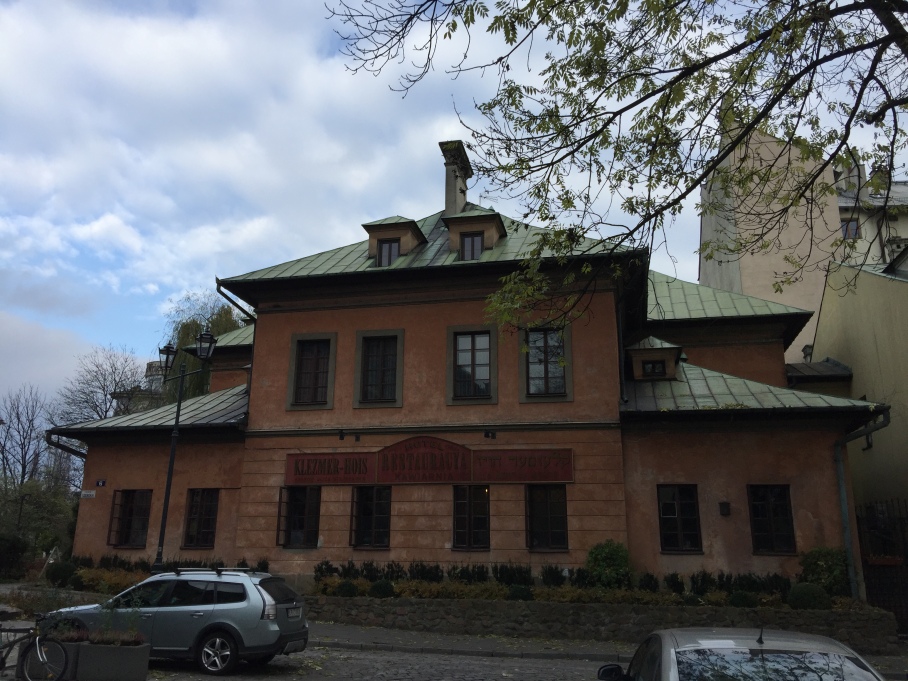 We ate traditional yiddisher food before the klezmer performance began.

Dad was overjoyed. They even played some familiar tunes.

It was definitely special to hear our traditional music played in our ancestral land.

Taxied back to the hotel, went to sleep.