’twas a slow morning. Went with roommates to the small market at 11:00. Grabbed some bread and butter plus a few toiletries. Apparently you shouldn’t keep anything in the fridge that you don’t mind getting stolen.

Daniel and Kristaan were moved into our dormitory (just a few suites down) by the time we returned. We signed some housing documents with the building administrator and then traveled with George and a gal from Georgia (the country) to the bank in city center to submit our security deposits.

From there we met up with Dimo and a few others at Vinco Kudirko Square and walked together to the start of the student procession. The crowd was divided by faculty, but Erasmus students were placed in front. Erasmus is the student organization affiliated with the EU that coordinates study abroad for EU students. For all intensive purposes, I am an Erasmus student.

We marched the length of the primary city street to the University square. Erasmus students carried flags from their country of origin, unfortunately I did not have. 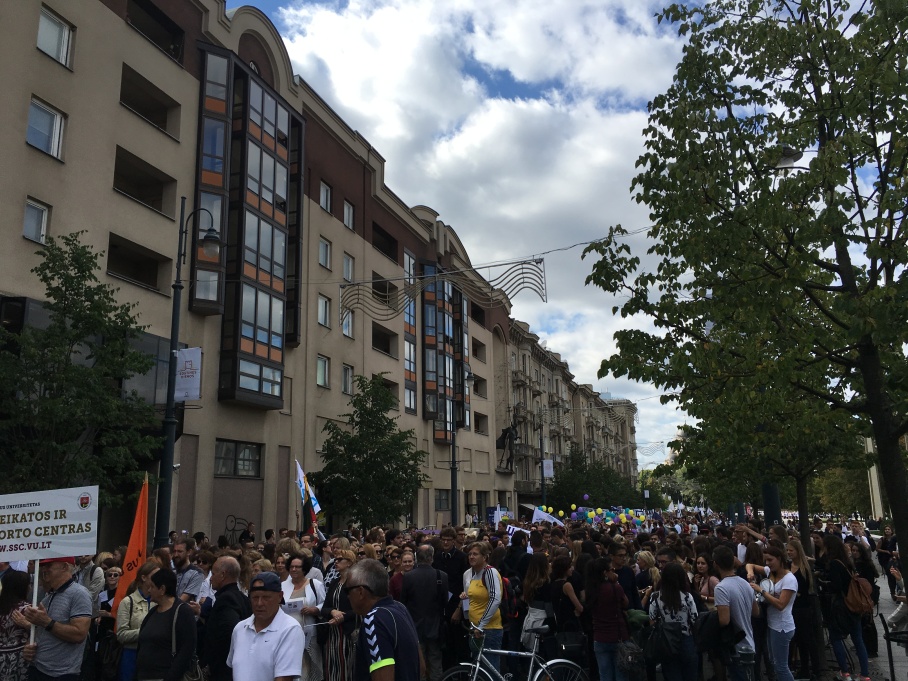 At the front stood a stage with the university band. To my pleasant surprise they played some nice tunes including ‘Valerie’ and ‘Respect’. A terrific Lithuanian artist accompanied them. Various university officials gave welcoming remarks.

Dino and George (my roommates)

After the event I went with Dimo, another German guy (Jan), a German girl, and an Italian girl to a nearby cafe. We traded country facts, but talked mostly about America.

Afterwards, I met up with Daniel and Kristiaan at a traditional Lithuanian restaurant (or at least that is how it was marketed). Daniel said the soup was the best he’d ever had.

From dinner we met up with a Dutch girl (Robbin) that the brothers had met at the procession and her friend from France (Enola). We had drinks before walking to the Karaoke event nearby. Big Robbin fan.

The Karaoke bar was beyond crowded with Erasmus students. I was hoping to sing some American classics, but unlike in American bars the performers were very talented, so I did not sing. I had a couple drinks and met some new people before heading home for the night. Most folks stayed out, but I wanted a good sleep before the big day tomorrow.